Passing Our Passion for Justice to the Next Generation 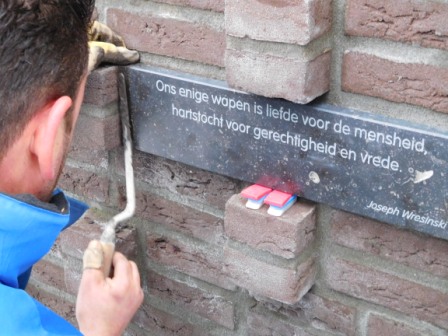 ‘Our only weapons are our love for humanity and our passion for justice and peace.’ Joseph Wresinski

A quote of Joseph Wresinski added to the wall of peace in Nijmegen, the Netherlands.

To celebrate the centenary of Joseph Wresinski’s birth and to launch the Stop Poverty campaign, an inauguration ceremony took place in Nijmegen, the Netherlands, on February 11, 2017.

The ceremony was held at the Titus Brandsma Memorial, dedicated to Brandsma’s fearless warnings about racism, appeasement and Nazi ideology before WWII and his commitment to freedom of the press and justice. Over time the memorial has grown to include inspirational quotes by others who worked for peace such as Mother Teresa, Dr. Martin Luther King Jr., and now Joseph Wresinski, who dedicated his life to the recognition of the rights of people in poverty.

About 160 people, members of the public and of ATD Fourth World from all over the country gathered in the church at the site of the memorial to listen to speeches and a choir concert and to witness the unveiling of the plaque with the chosen Wresinski quote.

Marieke Rijpkema, director of the Titus Brandsma Memorial, opened the ceremony recounting how two years ago the idea to incorporate Wresinski into ‘The Wall of Peace’ grew through “friendship and collaboration.”

This was not the only part of the celebration that was rooted in collaboration. The deliberation process for choosing the quote involved 130 young people from across the Netherlands who were given multiple quotes by Wresinski. They discussed these quotes in their classes and voted for the most inspiring. Once all of the votes were collected, a committee of ATD Fourth World activists made the final choice from the top ranking quotes. In his speech, Eugène Notermans, a Dutch Volunteer Corps member since the early days of ATD Fourth World in France, shared what he had learnt from working with Joseph Wresinski: “Above all what counts is your commitment to strive for justice when people fall victim to inhuman treatment.”  His speech closed with a reminder that, “the world can only change if we want it to,” inspiring the people present, across all generations, to act with purpose as Brandsma and Wresinski had done.

A class from the French Lycee School in The Hague were amongst the guests. They had been a part of the deliberation process and when asked about which quote they had chosen and why, one young person answered that it was because Wresinski mentions “love as a weapon.” Others were motivated by this quote because it “concerns everyone and gives hope to commit themselves for greater humanity.”

The theme of transmitting the preservation of peace from one generation to the next was continued in a speech written by ATD Fourth World activist, Petronella Wagenar, read by Hilly Oldenhuis. “My parents brought our family together again [after the children were placed in foster care]. We all need to come together. I have no children, but I want to pass that message on to the children of my brother and sisters, to the next generation. It is an honor.” An Alderman of the city of Nijmegen, Mr Ben van Hees and a Member of the French Parliament, Mr. Cordery showed solidarity with the cause by appearing at the event to unveil the plaque.

The day’s celebration continued in the spirit of solidarity with a meal prepared by ATD members at the Fourth World Farm in Wijhe and shared amongst the guests in attendance. Towards the end of the day a play was performed by The Joseph Wresinski Culture Group, depicting the harsh realities of people in poverty trying to find stable work in the Netherlands today.

All in all the day’s events were an overwhelming success in cementing ATD’s on-going commitment to the eradication of poverty through intersectional solidarity. Niek Tweehuijsen, National Coordinator for ATD Fourth World in the Netherlands summarised this well when he said: “Even if we have different backgrounds, we desire to live together in our neighborhoods. If we put our prejudices and fears aside, change can happen.”