Being Present to Challenge Prejudice 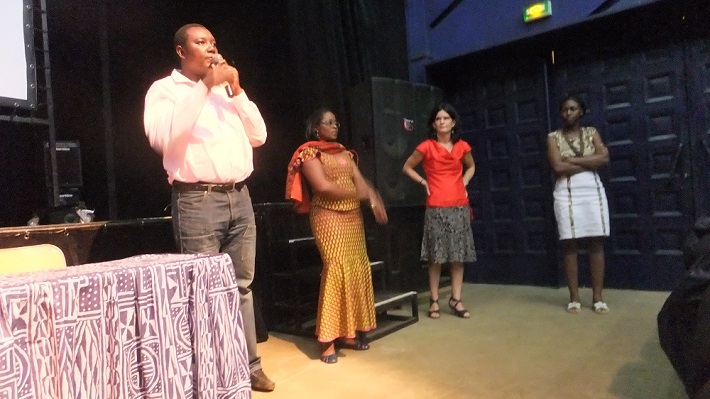 B. Ndeenga is part of a group of friends of ATD Fourth World in Cameroon. As part of his job with Caritas, he regularly visits people who find themselves excluded from society. He spoke about these experiences to others gathered to mark the World Day for Overcoming Poverty in 2014.

“For me, feeling passionate about the poorest people began when I joined Caritas, as a religious journey. It’s a journey through life marked by giving and receiving. These things are difficult for me to put into words. So I will speak from the heart.”

“I like taking initiative. I have made a commitment to challenging all that defines the word poverty, and to visiting all the people who have been pushed to the edges of society. My work is really straightforward: I go to neighbourhoods and I walk around. Most of the time, the existence of the poor is not recorded in any census — but you can always find them. At Caritas, a person’s religion — whether Christian or Muslim — makes no difference. Above all, we value each person. What motivates me is to see the dignity in each person, to see them holding their head high. It’s about having a presence among people who are often ignored.”

“I have noticed that excluded people tend to believe that they have brought their doom upon themselves. As a result, I always say, “I have nothing to give you but my company. I want to spend time with you; I want you to know that you matter to me. Even if others ridicule you, know that someone believes in you and values you.”

“The greatest battle is against cultural prejudice and the stigma associated with poverty. This is a very hard battle to fight. In a neighbourhood that I know well, people accused an elderly woman of witchcraft and burned down her home. This 72-year-old mother was banished. People had been saying, ‘She lives alone; we never see her go out. It must be her fault that a child died, that village affairs are deadlocked, that one of us failed.’ This prejudice is a huge barrier alongside material poverty. I believe that if we can break through this stigmatization we will accomplish something great. But this is hard. How can you convince villagers, ‘Listen, she is not a witch!’”

“The same problem —this cultural prejudice — affects people suffering from AIDS. I met a woman who was dying of AIDS. Some time earlier, her husband had also died of the same disease. No one would visit her because of her disease. She had spent almost two years alone. By the time I had heard about her, she was near death. Her disease was in its last stages. She had bulging eyes and wounded flesh. She had two children — the oldest was 8 years old and the second was 2 — who had never been to school. And I assure you that when I went to see her, all of the neighbours stared in puzzlement. I knew they were thinking, ‘But why would he go in there, is he crazy? What does he think he can do for someone like her?’”

“Whenever you approach neighbours such as these, to ask news of a person they have rejected, they are suspicious. I think this is because people just do not understand. Cultural prejudice can be very, very powerful in society. I believe that in order to overcome poverty, the first and most important thing we must do is to challenge this prejudice.“

“Another example of prejudice involves a seven-year-old child who had hydrocephalus, a deformity of the head, as well as deformed legs and a stunted growth. The young boy came from a poor family, and is one among three siblings. His mother told me that she had never gone to the hospital, because she simply could not afford it. However, as we talked, I realised there was more to the story. The mother had taken the boy to a traditional healer, who claimed her child was a sorcerer. Because of the healer’s remarks that ‘this child is not good’, the child was put in a corner, away from the others. There was a mat in this corner — where the child slept. I asked the mother why the boy was isolated. She told me that the healer said he might infect her other children.”

“The difficulty with this kind of situation is we can be tempted to lecture and judge. Instead, I usually just prolong the visit, and start to talk about other things — which can be a way to help a family see things differently. Often, there are a lot of factors that come into play and shape people’s actions. Not only do we have cultural prejudice, but there is also the force of peer pressure. The whole community can put very strong pressure on a family when one person after another accuses a child.”

“In this situation, change is not easy. I think that there is also a kind of institutional deficit. One individual can’t overcome a cultural stigma alone. You can visit regularly and give some advice, but where else can people find support? So often, a situation is stuck.”

“I have found that a few approaches help me better understand situations: being there, listening, valuing people’s capabilities, and respecting their opinions.”

“Very poor people have a lot to tell us. However, others rarely listen to them. Yet, I enjoy listening. In fact, when I visit these individuals, our conversations seem to be never-ending.”

“I try to show them that above all, another life is possible. I try to help them see that they are not under a curse. This is a very difficult conversation to have, especially given that many of the families don’t even have enough to eat. If I say that life could be different, they ask: ‘But how?’ The risk could be for me to just say, ‘Here’s a little cash’ — but then, what?”

“Instead, when faced with this question, I often lead them through a small exercise of introspection. Although introspection is difficult, it helps an individual realize their value and potential. No matter their background, everyone has capacities, aptitudes, and qualities. I start off by saying, ‘Listen, you have potential, you can pull yourself out of this difficult situation. Poverty is not a curse; it is only about living conditions. It can happen to anyone. Someone who was rich yesterday could today be poor. And you have the capacity to change your situation.’ I then say, ‘Tell me, you have positive qualities, right?’ They respond, ‘Yes.’ Then I ask them to list ten of these positive qualities. That’s a challenge because often they’ll respond, ‘No one should list their own positive qualities, that’s for others to say…’ But I insist, ‘No, you can tell me. Just look at what you’re capable of doing.’ It’s only then that the person will begin to say, ‘Well, I think I can do this, I think I can do that….’ I listen carefully and focus on one of those qualities that emerge. Seeing one’s own positive qualities is a powerful tool. A positive self-image gives us the strength to challenge ourselves and to change our perspective of ourselves.”

“Everyone wants and is entitled to respect and solidarity. The poorest people among us want respect — not judgement or lectures. If we can help them gain self-confidence, then I believe that the path to respect and dignity for all will appear. And in the process, we can set an example of challenging prejudice through actions, not words.”