Skip to content
Home > Dimensions of Poverty > Pushed to the Bottom: The Experience of Poverty in the United States

Pushed to the Bottom: The Experience of Poverty in the United States 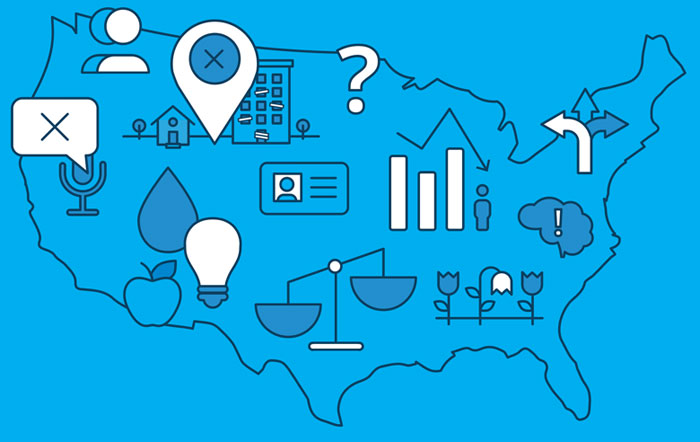 This is why for the past three years members of ATD Fourth World in the United States and around the world have been working together to build a deeper understanding of poverty. At the heart of what ATD in the United States has called the Multidimensional Aspects of Poverty (MAP) project has been the idea that understanding poverty requires not just the insight and expertise of academic experts, but also of social workers who work alongside people in poverty and, most important, people living in poverty themselves.

“This is what makes MAP so unique,” said Maryann Broxton, co-director of the U.S. MAP research. “It combines three types of knowledge about poverty by bringing these groups together to design, implement, and analyze the research. The result is more than the sum of its parts.”

The new report, “Pushed to the Bottom: the Experience of Poverty in the United States,” is the result of several years of work involving hundreds of people in six locations across the country. The report is available for download starting today and will be shared at events across the U.S.

What is it like to live in poverty in the United States?

“When you live in poverty,” one research participant explained, “you are always under somebody’s thumb.”

Poverty in the United States goes much deeper than just income level. Poverty means having to swallow your pride when accessing a much-needed subsidy, knowing that your children are not receiving the same quality education as their peers, and being trapped in a run-down community that lacks resources. You are told to be grateful for the little bit you do have and shamed if you are not. These are some of the essential aspects of poverty.

The U.S. research shows that poverty is the result of a process of subjugation. This subjugation forces one part of society to live in disadvantaged areas where they lack access to basic resources, to suffer ill health, and to struggle against work- and employment-related hardships. People in poverty have their voice silenced or ignored. They live in exclusion and isolation, and they endure stigma and shame. These different aspects of poverty are intimately intertwined with one another.

Addressing one aspect of poverty will often impact another, with cause and consequence impossible to disentangle. For example, when people take time to address health issues, they may miss work and lose their job. Sometimes, aspects of poverty can take the place of one another, leading to a sense that the harsh realities are inescapable: even if one issue is addressed, there is always something else.

Poverty is characterized by constant uncertainty and by having to choose between the lesser of two evils.

Poverty can be aggravated by racism and other types of discrimination, by the way many institutions treat the time of those at the bottom as worthless, and by the sheer weight of the accumulated aspects of poverty.

It will take more than just a report to change the debate around poverty in America – to do that, we have to build a movement.

On March 27, 2019, ATD in the U.S. will take the first steps in that process with an event at The New School for Social Research in New York City. The event will bring together policymakers, academics, advocates, and people in poverty to discuss the key findings of our report.  The first portion of this event will also be live streamed to Facebook – tune in at 6:00 p.m. EST on March 27th.

The following week, on April 4, Harvard University will host a similar discussion, with participation from members of the U.S. MAP national research team, activists from partner nonprofits, and professors from local universities.

On April 18, partners at the St. Mary’s Center in Oakland will bring the MAP report to the west coast. This event will complement the work they are already undertaking with the city, county, and state legislatures to pass resolutions acknowledging the importance of multidimensional poverty and recognizing the MAP Project as key to understanding poverty in the United States.

On May 10, ATD International will release the global findings with a seminar at the Organization for Economic Cooperation and Development in Paris. This multi-lingual seminar will bring together experts from across the international development world. Live streaming will take place and representatives from the U.S. MAP research will be traveling to Paris to participate.

On June 8, the MAP research team will hold an event in New Orleans at the Global Green Community and Climate Action Center.

All of this is just the beginning. ATD U.S. hopes this report can be a launching point for changing the way people understand poverty.