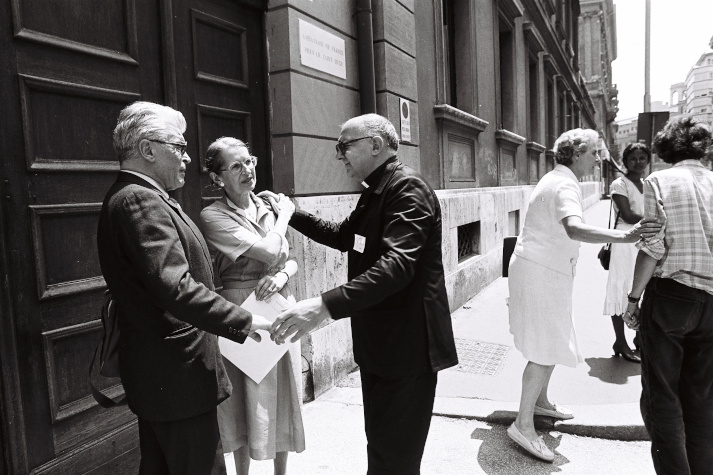 The centenary of Geneviève de Gaulle-Anthonioz’ birth provides us the opportunity to be inspired by a woman who is a vivid example of foresight and determination in protecting human dignity. As a young woman, de Gaulle opposed totalitarianism. Later, with ATD Fourth World, she saw a connection between totalitarianism and social exclusion.

Fighting the German occupation of France in 1940 was natural for the niece of General de Gaulle. However, witnessing the fate of Jews in France and then in the Ravensbrück Concentration Camp for women where she was imprisoned at 23, de Gaulle came to the conclusion that she and the other prisoners had opposed more than just military occupation. They were witnessing inhumanity take control of the German people.

After her liberation, de Gaulle Antonioz returned to Germany. She and her friend Germaine Tillion, an ethnologist who had also survived Ravensbrück, served as witnesses for the trial of the female guardians there, and later the Director of Ravensbrück. De Gaulle Anthonioz agreed to travel again towards the North to do this because she wanted to honour the women who had not survived.

She came home devastated. She wrote an article, “Germany Judged by Ravensbrück”1, in which she described how shocked she was by the lack of awareness—in Germany, in the British and United States press, even in France—of what had happened at Ravensbrück.

From that moment on, even as a mother with very young children, she fought for the rights of concentration camp survivors. She also actively supported causes where she felt human dignity was at stake.2

When her uncle General Charles de Gaulle became French president in 1958, he appointed his niece Secretary of State for Cultural Affairs. That year, the 38 year old visited Father Joseph Wresinski at Noisy-le-Grand outside Paris, walking the last kilometres on foot because public transportation did not reach the camp. In this camp for homeless families, Wresinski just had just started the “European Group for Cultural Action”, an initiative that would become ATD Fourth World.

After seeing the conditions at Noisy and meeting Wresinski, de Gaulle turned down her appointment as Secretary of State for Cultural Affairs and soon become president of ATD in France. She remained president for many years, even after Wresinski’s death in 1988. Her biggest achievement in this role was the French government’s adoption of a law3 against social exclusion.

Where did de Gaulle get her strength?

When I, a native German, informed Geneviève de Gaulle-Anthonioz about my intention to go to Berlin in 1992, after my country was reunited, she said, “Oh! That close to the Man with the Helmet!”  She referred to a painting by Rembrandt4 displayed in Berlin of a man in a lighted helmet on a black background. Geneviève de Gaulle-Anthonioz’ comment shows her perception of human mystery—wandering between the extremes. But she had confidence in the light of hope.5

What I remember most of Geneviève de Gaulle-Anthonioz is her confidence that humanity would always prevail over inhumanity. That confidence gave her courage and determination throughout her life.

So, we never give up the fight for justice.

Mascha Join-Lambert was a young ATD Volunteer Corps member when she first met Geneviève de Gaulle-Anthonioz in 1972. Later, Join-Lambert and her husband started an ATD project called “Forum for a Common Europe” near Berlin, not far from Ravensbrück. With the support of the Ravensbrück Memorial and the Foundation Toepfer/FvS she produced an exhibition about Geneviève de Gaulle-Anthonioz called “Women From Tomorrow.”6