Standing Up to Poverty by Writing 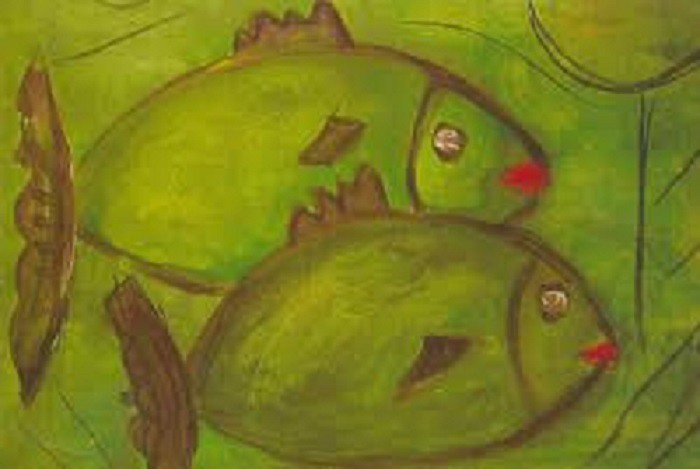 Above: “Don’t be silent like the fish.” Painting by Nelly Schenker.

Nelly Schenker grew up in poverty in German-speaking Switzerland. Telling her story was her life’s work. To write one’s life story is a fascinating job, she says, but it’s also delicate, because “life is as delicate as lace!”

The idea of telling my life story was born when we were living in a tent with our children. A friend told me then: “There are people from ATD Fourth World who say that you should write your story…”

At that moment something came to me. But it was all so strange! You need help and people are talking to you about a book? You have no milk for the children, you are cold and you have no roof over you head… I didn’t get it at all. What good would that do? So I let her words settle. Then much later I said to myself: “You know, maybe if I write about all of this, people will understand how much I need help.”

When I was a child, I was put in an institution, and the nuns there weren’t patient enough to teach me anything. Later, as an adult, I didn’t want anyone to know that I wasn’t educated. When you live in poverty, you’re living in shame, and to protect yourself you have to pretend, you have to act the part. It was only with my own children, years later, that I learned to read. In the evening, I would read their school books.

Swiss Citizens Without a Name

The book Swiss Citizens Without a Name was important to me because finally, in the 80’s, a book talked about poverty in our country! It was then that I realized how much I was trying to find myself. But at the same time, I found that the book wasn’t deep enough. I was almost disappointed; I couldn’t quite connect with it.

And so, encouraged and supported by two members of the ATD Volunteer Corps, I started writing about what it was like to grow up with my mother in extreme poverty. I decided to write this book because I wanted to tell my own story but also because there just aren’t any stories written about poverty in German.

When you can speak and write without embarrassment, without holding back, without shame, confidence grows within you. It is empowering to show your true face, without a mask! These moments are so precious.

Writing, expressing myself… Yes, it woke me up; it made me more aware. Before I was asleep; no, worse, I was in a nightmare. Life was suffering.

Today, this book about my life has been born. It’s called A Long, Long Wait for a Little Golden Nothing.* We’re doing a book tour with the friends who helped me write this book. To do this book tour was my deepest hope. Sometimes during these evenings I am so happy because there is a simplicity, a sense of peace in the room. But there is bitterness too alongside the joy. We’ve lived through so much injustice, it’s impossible to forget. I also have so many expectations — things need to finally start moving! Things need to change! Never again… I want these evenings to be more than just isolated events — people need to take action, to roll up their sleeves and get to work.

At the last event we had, there was a woman there. I could see poverty written on her face; she had been marked by a hard life. Later, as is often the case during these events, she came up to talk to me.

“Deep down,” she said, “that’s my story too that you’re telling there.”

That’s what gives me strength — now we are speaking out! The more of us who stand up and speak, the more the politicians and every person will be obliged to take action.

But so many people are still in silence.

I told that woman: “We’ll see each other again. We’ll keep in touch.”

*The book A Long, Long Wait is available here: