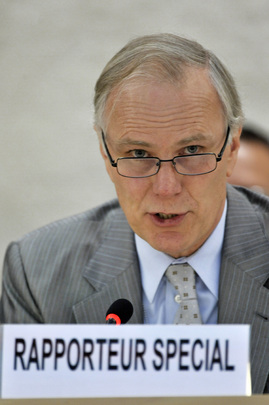 World is ignoring human rights of poor despite disproportionate abuses

GENEVA (16 October 2017) – The world’s poor are at disproportionate risk of torture, arrest, early death and domestic violence, but their civil and political rights are being airbrushed out of the picture, UN Special Rapporteur on extreme poverty Philip Alston has warned in a hard-hitting statement to mark International Day for the Eradication of Poverty on 17 October. Even human rights groups are failing to draw the link between civil and political rights violations and poverty. Alston, who will report on the issue to the General Assembly later this month, said it was shocking that on the 25th anniversary of the international day, so much remained to be done:

“If you are a victim of torture, the chances are significant that you are also poor. The same applies if you are a woman or a child who is a victim of domestic abuse.

As a poor individual, you are more likely to be arrested and prosecuted for crimes and, if you are, you are less likely to be able to afford a lawyer. The poor experience additional barriers when they want to vote and often have virtually no influence on political decision-making.

In short, people in lower socio-economic classes are much more likely to get killed, tortured or experience an invasion of their privacy, and are far less likely to realize their right to vote, or otherwise participate in the political process.

Development and human rights organizations, as well as Governments, mostly ignore violations of the civil and political rights of the poor, with terrible results.

Key international agencies, such as the World Bank and the OECD, ignore human rights altogether and have paid no attention to the specific civil and political rights of those living in poverty.

Even those working in international human rights, including many UN Special Rapporteurs, experts, groups and committees, often focus on civil and political rights violations without dealing with the fact that these are interlinked with poverty.

The same applies to international human rights NGOs. Analytical work like the 2006 report by the World Organization Against Torture (OMCT) on the root causes of torture is the proverbial exception that proves the rule.

Airbrushing the civil and political rights of the poor out of the picture has taken several forms.

Firstly, human rights organizations have assumed that poverty can be explained exclusively by various forms of discrimination. But the use of a surrogate lens is clearly inadequate for capturing the very specific consequences of the varied forms of discrimination, oppression, stigma and violence experienced by many of the poor on a daily basis.

Secondly, virtually all Governments, UN human rights bodies, and human rights organizations have ignored the fact that key provisions in all major human rights treaties prohibit discrimination of any kind on grounds of social origin, property, birth or other status.

The result is that discrimination based on socio-economic class is hardly ever part of any analysis.

I call for a new approach by the human rights community, the development community and Governments that gives due attention to how often and how exactly the civil and political rights of the poor are violated.

It is for everyone involved to determine how that goal can best be achieved, but a key starting point is to begin collecting data.

So little is known about how the poor are differently and disproportionately affected by civil and political rights violations, that no sensible response can be expected without more knowledge of its root causes.

All of us who advocate for people’s human rights to be respected, whether from within the UN system or any other group or organisation, must be part of painting the poor back into the picture, closing the knowledge gap and rededicating ourselves to the search for solutions to their disproportionate suffering.”