Stopping the Cycle of Violence in CAR 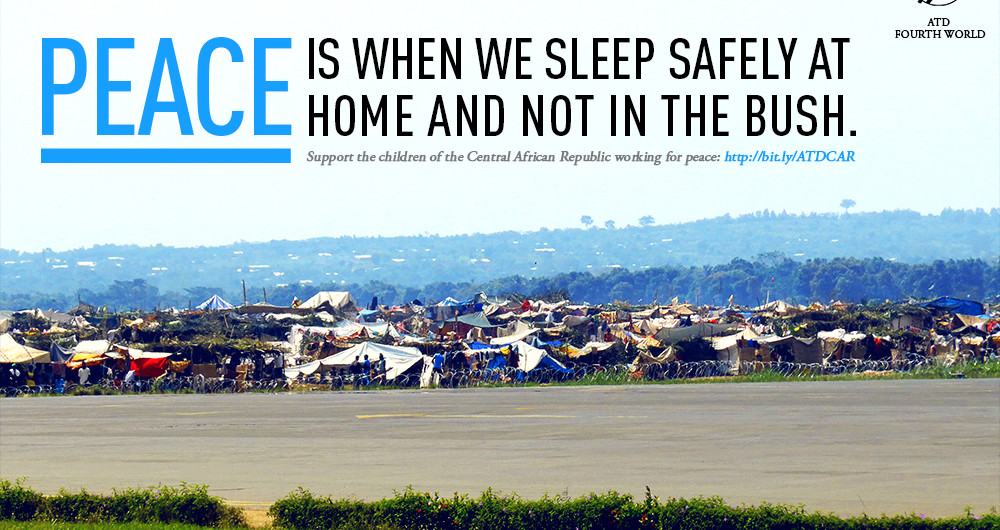 A story of a young boy in one of our Street Libraries in Bangui shows the way that ordinary people are working for the difficult reconciliation in Central African Republic.

The Street Library is a reference point for everyone in the camp, where over 100,000 people have been living for months since the beginning of the violence.

During the day, like many of the children who are part of Street Library, Pierre went back to the neighborhood he used to live in to look for wood for heating and to take care of other jobs for his family. Many of the displaced people at the airport do this, returning to their homes during the day to show they are not abandoned and to check on the local situation, but then spending nights in the safety of the airport camp.

On the way back, Pierre realized he had forgotten something that his mother had asked him to do and so since he didn’t want to get in trouble, he went back. It was already getting late then though. He was scared to spend the night outside the camp, thinking “mom won’t know where I am.” And so when he had done what he needed to do, he returned to the airport.

On the way back, he was attacked. A young man beat him and whipped him. He had cuts everywhere, his foot was broken. He was left along the side of the road. It was a father who was passing by who heard the child crying who then picked him up and brought him back to the camp.

Ulrich, a friend of ATD who helps run the Street Library at the airport, said, “In the camp, everyone knows that when a child is lost, you have to go to ATD. If your child is sick and you want to take him to the hospital, you bring him to ATD because people at the hospital know us.” So Pierre was brought to the friends of ATD at the camp, a group of young people who have come together to help run activities for children, to help new families find their way, and to generally make things run smoothly. They asked Pierre who his family was, where they slept – but he was so weak that he couldn’t respond.

Ulrich took him to the hospital and in the morning Pierre had recovered enough to explain where his family was. Once the family was located, they rushed to the hospital. The doctors from MSF arrived as well and they decided Pierre would need a cast and would have to be taken to a different hospital. Ulrich accompanied him in the ambulance.

The next day, Ulrich was talking with a group of anti-balaka, the militia group most present in the city. He participates in a discussion group with them, trying to encourage them to pursue peace. It is risky work, and he can only continue because he knows some of the members of the anti-balaka personally and feels that since they know him well now, he will be safe.

“This kind of thing,” he told them, speaking of Pierre, “it is dangerous for the children, it will bring about so much hate.”

The anti-balaka said they would discuss the issue amongst themselves to see if it was one of them who had attacked Pierre. Soon after, they found the young man who had beaten Pierre. He had done it because before all the violence, when they had been living in the same neighborhood, Pierre had insulted him, had used words against him that he couldn’t forget. And so when he found him there on the streets that night, he had attacked him.

Ulrich asked him to come excuse himself before Pierre’s family “so that this hate doesn’t continue.”

They went together to beg the family’s forgiveness. He presented himself before Pierre’s mother and excused himself in simple words. Pierre’s grandmother said, “I wanted revenge for the blood of my grandchild. But since you have come and spoken with me, I won’t do anything now.” The young man left, and the anger of Pierre’s family disappeared.

Anonymous violence leads to blind vengeance. From the cruel words of Pierre to the violent attack, it is a cycle that must be broken – and no military force can do that, only ordinary people talking with one another and listening to one another can accomplish that. Once violence has a name, once people meet face to face, only then can there be forgiveness.