The Role of People in Poverty in Eradicating Extreme Poverty 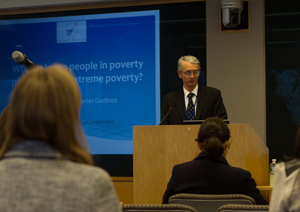 “Many projects and actions concerning people in poverty turn in to persecution of them.” This was one of the key messages brought by Xavier Godinot, Director of Research for International Movement ATD Fourth World to the World Bank on April 9, 2014 as part of a seminar entitled, “What Role Can People in Poverty Play in Eradicating Extreme Poverty?”

Organized as part of the Spring Civil Society Organization Meetings, the panel discussion marked the official release of the results of our participatory research on the Millennium Development Goals. Based on research conducted with over 2,000 people from over 20 countries, the report brings the voice of those in poverty and extreme poverty to the debate on the post-2015 development agenda.

Presenting the panel, Bertrand Badre, Managing Director and World Bank Group Chief Financial Officer, recalled his own experiences of ATD Fourth World when he was a student in France, and brought to mind the memory of Joseph Wresinski. The discussion which followed was moderated by Mahmoud Mohieldin, the President’s Special Envoy on MDGs and Financial Development of the World Bank Group, and Ben Fehsenfeld, National Director of ATD Fourth World USA. Marcelo Giugale of the World Bank spoke on the importance of having people in poverty as shareholders of natural resource rights in order to encourage good governance, Pamela Gomez of the International Trade Union Council spoke on the importance of trade unions in the fight against poverty, and Robert Walker of Oxford University spoke on research he has been conducting on the link between shame and poverty.

The seminar was an opportunity to present the five recommendations which came out of the participatory research to World Bank staff. Those recommendations are (1) leaving no one behind to ensure that development reaches all people in poverty, (2) introducing people living in poverty as new partners in sustainable development, (3) promoting an economy that respects people and the environment, (4) achieving education and training for all based on cooperation rather than competition, and (5) promoting peace through participatory good governance.

Partnership to build a movement to end poverty is a priority of the bank over the coming years, and at the end of the presentation Mr. Mohieldin expressed interest in finding ways to cooperate in the future, particularly in the idea of conducting seminars between bank members and people living in poverty. There is still a lot of work to be done to make that collaboration a reality, but the event in DC represented the next step in creating a sustainable development that truly leaves no one behind.