Skip to content
Home > Europe > Bulgaria and Southeast Europe > Stories of Dignity and Courage, Here and Around the World

Stories of Dignity and Courage, Here and Around the World 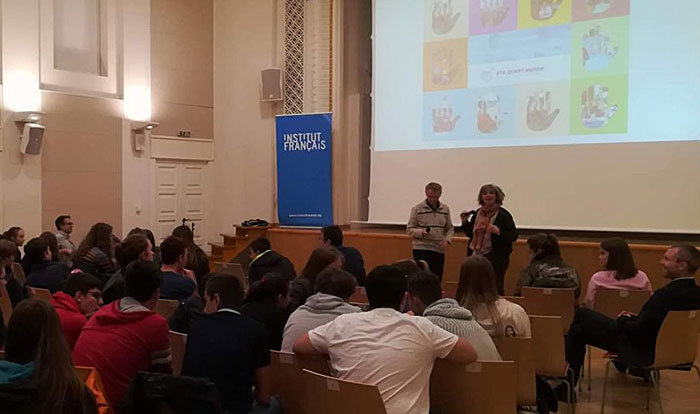 In Sofia, Bulgaria, on the 28th September 2017, the film, Joseph W. The Dissenter was shown, followed by a debate.

The event was hosted at the French Institute at which 45 people gathered to see the film, Jospeh W, The Dissenter.

During the debate, the participants were able to say how the film affected them, and also how this story continues with people living in great poverty today. The participants engaged positively throughout the evening!

“With the street children I meet in Bucharest, something that is really important is laughter. When you laugh, you put your worries aside, you show your happiness, and you share. You are a man and you show you are growing up.”

“The film shows that things can change when people work together. In the work that I do, I meet people that have been able to overcome their despair and their conviction that nothing can change in their lives. I saw the same thing in the film. That gives me a lot of strength and hope….  We have to show them that they are not the only ones fighting poverty.”

“Relationships are forged slowly but surely as we have seen in the film. It took a long time for Father Wresinski to forge relationships with the people, but as soon as these people believed that they were human beings, they were able to escape from poverty.

The debate also offered the opportunity to tackle other themes such as initiatives in agriculture or the issue of energy insecurity. Everyone was able to share their daily actions of solidarity actions with the people living in poverty, so that they would be able to “rise” and “stand up”.

“What we saw in the film is that inequality and poverty are not only a question of resources and energy; they are also a political issue. There are those that have the right to make decisions for others and at the same time those that do not have that possibility. In our group, we are people who seek to act in a radical manner, in the most autonomous way possible, without relying on national or European subventions. We just rely on citizenship. There are others that rely on institutions.”

“In other countries, with ATD Fourth World and other actors, it is this combination of citizenship and political engagement that has brought important changes towards eradicating poverty. That is the case in Guatemala, in Belgium, in France, Quebec and in other places.”

Developing a network of relationships

On several occasions, some people expressed the importance, whilst being involved in local projects, of being inspired by ideas from others and – whatever our means of action – of being able to collaborate in order to be stronger, so as “to develop a network of relationships.”

This is what is shown in the digital book presented during the evening and prepared by the ATD Fourth World movement this year, based on Stories of Change collected from different countries in South Eastern Europe. It helps understand how people living in poverty and those that join them stand up together. You can find the book by clicking here.

A special moment that same morning was when the the film was shown to two classes of the French high school, Victor Hugo. The pupils were able to discover the life of Jospeh Wresinski with the families in a camp in Noisy Le Grand, near Paris. A pupil concluded:

“It is not merely a question of giving, but also taking action and being with the people. I understood from this film that you should not do charity but to be yourself with others”.