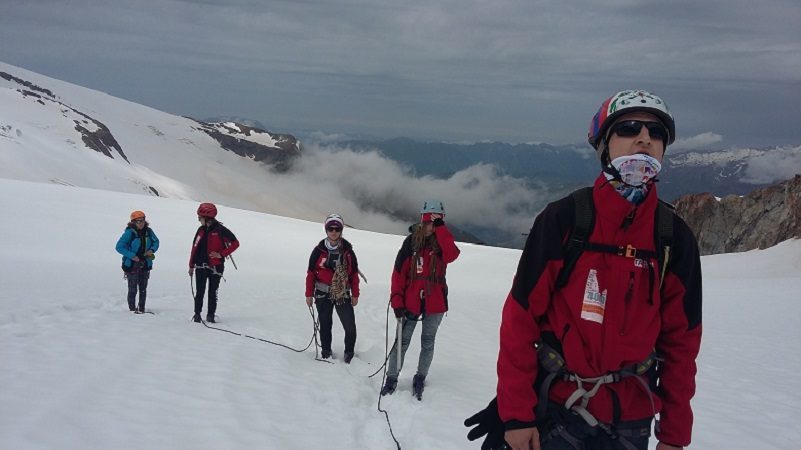 Mountain climbing, sharing international foods, and discussing gender in a safe space were all activities that young people in ATD’s Dynamo project enjoyed last summer. Djynamo promotes encounters among young people in Europe that break through the isolation created by poverty. Participants challenge themselves, have fun, and learn how to develop relationships with others across the divides of nationality and social background.

Getting to Know One Another

In July, Djynamo Belgium met Djynamo Poland in Brussels for a cultural youth exchange. It was a fun and interesting week for everyone!

“We did a lot of activities. We worked in the ATD Fourth World garden in Brussels. We had a BBQ and we went to the seaside.”

The participants particularly enjoyed the combination of freedom, fun and responsibility.

“Everyone was divided into groups to do a job, such as making dinner. We had to do the grocery shopping and then cook the meal. We got to choose what we wanted to make. That was fun.”

“I learned that they [the participants from Poland] are hard workers. They organized the cultural exchange activity in which they presented their culture very well.”

“It was special and fun. You learn things from an exchange like this. For example, they have different eating habits. They eat cheese with everything and immediately clean up after themselves!”

At the end of the week everyone was sad to see the time together come to an end.

“Saying goodbye was difficult because we knew that we would not see each other again. It was the first time I really regretted a summer camp ending. We formed a connection very quickly and we had a great time.”

During the first week of July, a group from Poland took part in a European youth project called “82 4000” that provides Alpine expeditions to people who cannot afford mountain sports. The Polish group met other young people from France, Belgium and Switzerland in the picturesque town of Le Monetier-les-Bains, situated 1300 meters ASL (above sea level). Their goals were mountaineering, Via Ferrata (Italian for “Iron Road”, climbing rigorous paths attached to an iron cable to prevent falls), walking on a glacier, and sleeping in a tent at 1800 meters ASL. Despite some initial doubts, the young people achieved their goals and finished the week both exhilarated and proud of themselves.

In addition to outdoor activities, there were opportunities for cultural exchange and meeting new people. For example, every evening the young people prepared traditional dishes from their home country. One of the participants, Diana, commented:

“This wasn’t just a holiday trip to an interesting place. It was really a turning point in my life. The trip allowed me to learn about a new way of life, to meet wonderful people who have a different way of thinking, and to have a fun and inspiring time together in a beautiful place. On a trip like this, it was impossible not to fall in love with the mountains.

The physical effort of climbing allowed me – for first time in my life – to forget about everything, to forget about everyday problems and difficult decisions awaiting me. The trip gave me the chance to look at my life from another perspective and to see that it is not so bad, that I will manage. Thank you for this great adventure.”

In August, eight Djynamo young people from different areas of Belgium travelled to Malta, a country located between Sicily and Tunisia. EERC, a Maltese association, invited the group to take part in a gathering with 48 other young people from Turkey, Hungary, Ukraine, and Armenia.

For eight days, the young people went camping and engaged in a variety of activities and tours as well as organized discussions and debates. Although it took some time to get up the courage to talk to strangers, the gathering turned out to be a great opportunity to meet new people from new places. There were challenges, however:

“Despite our hopes for a new adventure, the living conditions were challenging and we sometimes felt we were in an episode of “Koh-lanta” [the French version of the American TV show “Survivor” in which contestants try to survive in isolated conditions]. We sometimes felt like political refugees trapped in some sort of military camp […] certainly not young people wanting to get to know one another. Nevertheless, we managed to get through these difficulties together and we really bonded with one another.” The experience pushed the group out of their comfort zones and forced them to see things from very different perspectives. They learned that there are people whose every day lives are more difficult than their own. In the end, they all agreed that, given the choice, they would definitely do it again.

A year after Ireland passed the ‘Equality Referendum’ allowing same sex marriage, the Irish participants in Djynamo’s 2016 youth meeting on Sexuality, Gender and Sexual Exclusion were well versed in many of the issues on the agenda. The meeting took place in Ireland and also included Djynamo groups from Belgium, France, Poland and Switzerland.

The groups from different countries initially got to know each other through some simple games. They met new people and heard new languages playing basketball together and doubles on the pool table (where cross-country rule differences quickly emerged). One participant described how the group developed its own schedule:

“Early in the week we drew up rules together to keep us on the straight and narrow. We were up and about early for breakfast and, well, literally it was a case of ‘if you snooze you loose’!”

The Sexuality, Gender and Sexual Exclusion workshops were facilitated by agencies outside of ATD Fourth World. When someone wanted to raise a topic or share their thoughts, that person would fly a paper airplane across the room. Participants knew that they could speak openly and that anything they said would be treated respectfully and kept within the group. Over the week there were moments of laughter, embarrassment and sadness.

A parenthood workshop group shared what they had learned through a live demonstration of how to dress a baby and change a nappy [diaper], carefully supervised by the baby’s mom herself. Participants celebrated freedom and diversity together by inventing new words to a well-known French song.

The young people discussed the idea of ‘normal’, examining how people can identify their own sexual orientation in many different ways. They agreed that people could look at sexuality and gender from many perspectives: social, physical, psychological, etc. The common and resounding ‘check out’ message of the week was how good it was to meet new people and be together!