Skip to content
Home > Leadership Team > The Journey from Outcast to Activist: It Starts With “A Seed in the Heart” | Diana Skelton

The Journey from Outcast to Activist: It Starts With “A Seed in the Heart” | Diana Skelton 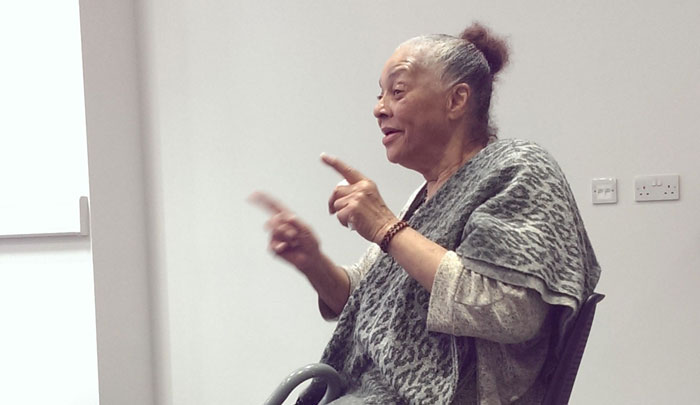 “When we got into the room with Dr. Martin Luther King, it was like talking to someone with an aura around him. It was all in his eyes. But did we hold our heads down? No! And we said to him: ‘We want respect.’” To mark Human Rights Day on 10 December, ATD member Jean Stallings was the guest of honour at the opening of a special exhibit in London called Journey to Justice. As this exhibit tours schools and community centres in different parts of the country, veterans of social justice struggles recount human rights history to young people, who draw inspiration to take action themselves.

The history that Jean told them is about an aspect of the civil rights movement that is not well known. In the 1960s, when Jean was a young single mother, there was no place for unmarried mothers in that movement. She was refused a membership card by the NAACP. The issues that single mothers cared about were ignored. On top of that, Jean did not see herself as an activist. It was one day when she was at a second-hand shop to find clothing for her children that a woman invited her to a meeting about rights for mothers. Jean says:

“I hesitated. I was terrified to walk through the door into that meeting with my babies in their stroller. But the other women reached out to me that day. They planted a seed in my heart that began my journey to activism. At that time, there was no recognition for single mothers as human beings. You were outcast because of the colour of your skin, and also as a single mother. We were stigmatized by case workers who would inspect our homes looking for a trace of a man, trying to prove we were lying about being single, and turning our homes upside-down in front of our children. Our goal was to let people know that we wanted to be treated with dignity. In the welfare rights movement, other women trained me. I found my own voice. And we cared for each other, even in hardship. In your worst moments, what you need most is someone who will look into your eyes without disgust.” In 1968, Jean was one of a small handful of women chosen from across the country to meet with Dr. Martin Luther King. Again, she says how frightening this was: “It was my first time taking an airplane. I didn’t know if I would be properly dressed. Someone gave me shoes—proper shoes—to wear when we would meet Dr. King. But when we got into the room, it was like talking to someone with an aura around him. It was all in his eyes. But did we hold our heads down? No! They didn’t call national welfare rights activists ‘women’; they called us ‘warriors’—’mother warriors.’ And we said to him: ‘We want recognition, we want respect. And we want to be a part of your movement, but you will have to include us in your talks. You have to tell people the challenges we face, because mothers are the bearers of the next generation.’”

In 1999, Jean’s journey to activism took her to ATD Fourth World where she has spent years as an advocate at the United Nations, and also in low-income communities reaching out to and mentoring people who are struggling. Looking back at our journey together, with members of ATD across North America, Africa, and elsewhere, I see three key threads that nourish the seed of activism in our hearts: So many of our members have been finding their unique voice, as Jean Stallings said she did once the seed of activism was planted in her heart. And as a movement, we have been finding our collective voice where each person has the chance to develop her or his thinking in dialogue with others.

About the injustices that people around the world face today, Jean said: “We’re in trouble! But we can never give up. We have to cast away our doubt, and our fear, and our anger. I get discouraged when I see evil. But will I let an evil spirit overtake mine? Can I let it make me lose the purpose of my life? The answer is no. We can never let that happen, and we will never give up.”