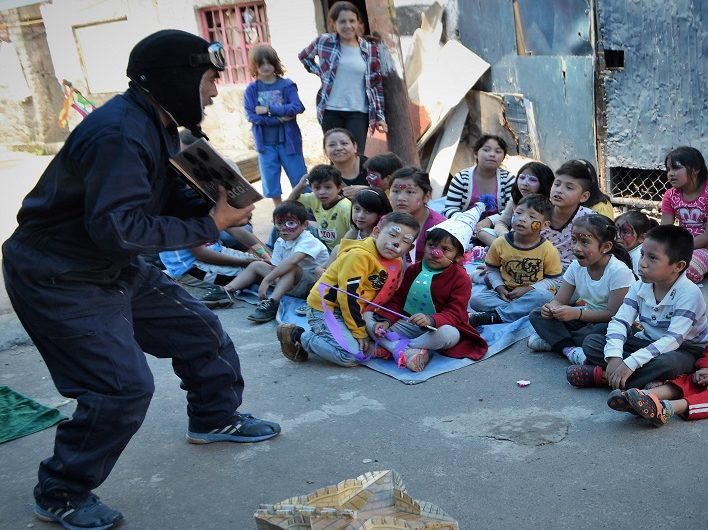 During two days in July, in Tlalpan, Mexico City, the first ATD Festival of Learning took place in Colonia Mesa de Los Hornos. Residents from neighbourhoods in poverty and people from other areas of the city came together over the two days and got to know one another. Many volunteers were eager to share their time and skills bringing art and culture to parts of the city where they are not always available.

The Festival in Los Hornos opened the neighbourhood’s doors to these volunteers who organized art workshops for the young children and a hairdressing workshop for teenagers. For the children who come to the regular ATD Street Library in this part of the city, the Festival provided practical, fun, and useful skills and knowledge. For two summer days, the colourfully painted streets were full of the laughter of children and young people enjoying the chance to create things for themselves.

The street became a stage, the scenery a set of chairs on tarps covered with work supplies showing where all the different activities were. Children went from one workshop to another making masks, circus costumes, ribbons, bracelets, necklaces, and musical instruments. The teenagers listened to tips on cutting hair and then, holding scissors and combs, invited everyone to come visit their makeshift salon. Throughout the day, a volunteer Storyteller performed for the crowd. The children and teenagers experienced art and learned new skills, but also had the chance to express their creativity and let their imaginations run wild.

To celebrate the last day of the Festival, children asked the organizers to do face painting. There was a lion, a princess, a clown and even a warrior. Then, as everyone divided up into two teams for games, the street filled with shouts of encouragement and laughter. In one game, two participants had to move around while pressing a balloon between their bodies. There were sack races, the egg on spoon race, and balloons popped loudly by the children’s feet. In the end, a tie was called between the two teams and everyone celebrated by breaking open a candy-filled piñata.

Young artists adorned themselves with their artwork and paraded through the neighbourhood dancing, shouting, and singing “Come out to the party!” inviting neighbours to the last act of the festival: Apollonius performing a thrilling story that left everyone speechless.

After the Festival, Erika, one of the volunteers, said, “It affected me deeply to get to know these beautiful children, their stories and their hopes–especially Victor, Gerardo, Citlalli and others. Their smiles and the lovely things they said reminded me that it is a great privilege to work with and for children. This Festival of Learning gave me lots to think about and some new ideas, which I hope to share with them soon”.

The Street Library in Los Hornos would start up again in early September but for now, everyone had beautiful memories from the summer Festival of Learning. ATD Fourth World is very grateful for donations received through the “Adopt a Street Library” campaign. Thanks to everyone who contributed to make this Festival and all its happy memories possible.

Video of the street library in Mexico City.