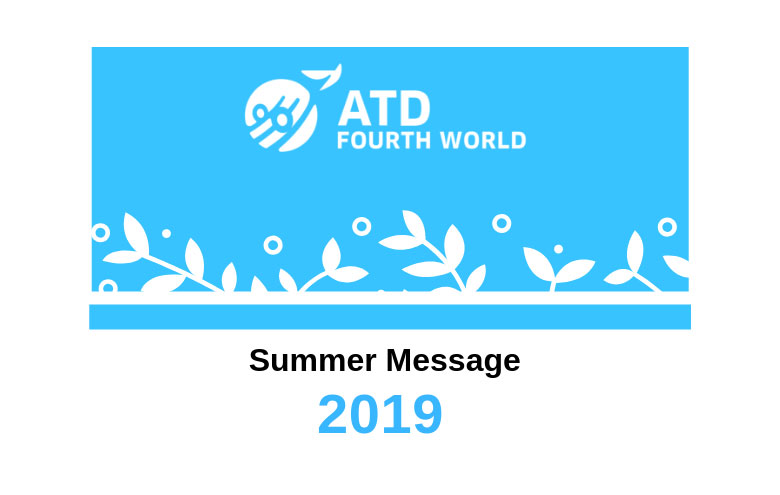 “From all corners of the world, the young people of the Fourth World demand to be acknowledged. They want skills of the future. They say to those who are older: we refuse the poverty of our parents; with you we want to live in a world without oppression and exploitation. They seek men and women in whom they trust, from whom they learn freedom, with whom they push back the frontiers of ignorance to finally give birth to a real brotherhood and sisterhood for all.”

It is 10 pm in a large French city, Juliette is on her way to the shelter where she has chosen to live. She sees a young man with a dog and can in his hand. He is looking for a place to sleep for the night without being disturbed. She tells him the first words that come to her: “Wow, your dog is big! It scares me.” They begin to talk and a simple discussion between two human beings commences. His name is Kevin. Over the course of the conversation, he names the places where he takes refuge most often: on his mattress in front of the bank, in the subway when it rains … Juliet engraves them in her memory. Since a teenager she has kept important ideas in a box. Among them:

In the past Juliette had thought about becoming ​​an ATD Fourth World Volunteer Corps member, but she pursued other paths in life. After her studies she ended up spending several years in Africa with various NGOs.

However, she is now a Volunteer Corps member and has been for three years. Her job is to reach out to young people excluded from society. This includes young people in the neighbourhood where she runs a street library. She also meets young people excluded from society in the shelter where she lives, or in chance meetings, such as with the afore-mentioned Kevin. Many have little contact with their families. Placed as children in foster care, they are required to get to know their parents, brothers and sisters again. This is often after childhood or as an adult and is not in ideal conditions. “We do not know each other any more, it creates confusion”.

She helps, encourages and connects many of these young people with educators, local services, schools… She also listens to their hopes:

She has been bold enough to suggest a support group so that members can talk and share together. “What?!” At first, there were only two attendees. Now, when she arrives, there are sometimes a dozen who leave what they are doing and come to her: “Yes! There is a group today!” they exclaim.

Together they prepare a Fourth World People’s University and continue a dialogue with local authorities.

“When we were in special classes, we were treated as people without a future.”

“I’m sick of people making choices for me. ”

“Sometimes when I ask for help at a centre or government office, I’m told to just use the internet, but if I come it’s to see someone!”

“Given all the problems I’ve had, I want to help others so that the cycle can stop. Taking action helped me understand.”

For Juliet, their words come as blows.

“It’s crazy what these kids teach me,” she says. “And to believe the world deprives itself of all this brainpower!”

These support groups require tenacity and know-how plus a good knowledge of how to work together and build bonds. Juliet gives an example, “I followed Kevin from the street to prison, then from prison to the street…. I was the only person to go see him in prison. Over time I noted all his phone numbers. I’m at 13!”

We ask Juliette where she finds her strength and she answers, “It is a group strength, because we are together, we want to be strong together!”

This summer ATD is planning many events and activities: 25 Festivals of Learning, 4 youth projects, a gathering in central France that will bring together 300 young people from a mix of backgrounds for a week.  As young people in the Central African Republic said:

“It’s the new things we learn with others that move us forward. If everywhere young people could meet, new projects would be born and everyone would have hope.”

Thank you for supporting these projects, we will keep you updated.