Taking Initiative to Clean up the Neighbourhood

Posted on 1 May 2019
This page is available in Malagasy 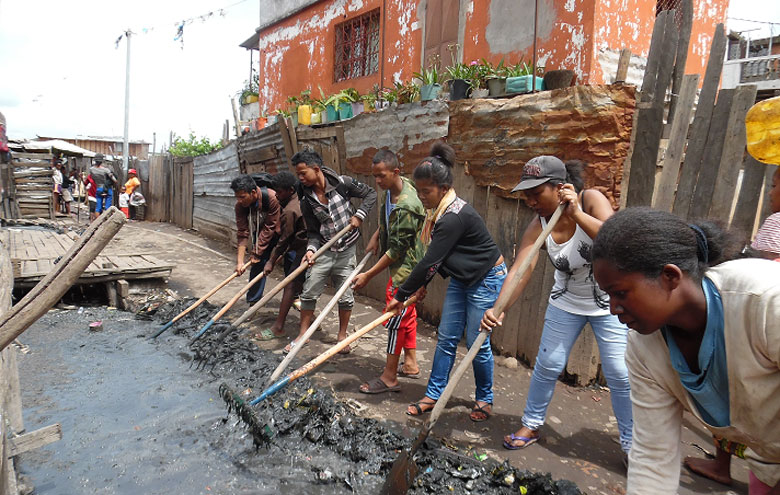 During the rainy season, it is impossible to walk anywhere without getting your feet wet in the Antohamadinika district, a neighbourhood located at the heart of Antanarivo, the capital of Madagascar. Increasingly violent cyclones and floods, and other effects of climate change, have become a big problem. Poor maintenance of drainage channels and ineffective waste management are not helping the situation either. The streets, already very narrow, are often flooded. Rubbish overflows from the canal that runs along the district.

All of this causes serious problems for the inhabitants enduring these difficult conditions. The water damages houses and even disrupts traffic. In addition, humidity and unhealthy conditions lead to illness. Faced with these problems, the Antohamadinika residents rallied around a project to clean up their district, forming a partnership with ATD Fourth World Madagascar and “Miharisoa”, an association of experts in the field. Together they worked to repave the main street with paving stones made from recycled bottles. The project also hired local young people to carry out the work and to receive technical training in the manufacture and installation of the paving stones.

“Miharisoa” introduced the participants to plastic waste collection and sorting techniques, bricklaying, and safety technology in an effort to give young people long-term access to the world of work. These young people also helped to clean up the district by recycling bottles, with a focus on those blocking the gutters or littering the streets. People involved in ATD solidarity projects in the area also helped clean the district’s smaller canals. Throughout the street-paving project, the President of the “fokontany” (a traditional village, or a district), the association RF2 (Rafitra sy Fikojana ny Rano sy ny Fanadiovana), and ATD all provided support to the work.

A successful project continues to grow

In 2017, the project managed to renovate 90 metres of the street. As a result, traffic in the district is now smoother and safer.

The inhabitants are delighted to see such a change in their district, which is often forgotten by the municipality. Today, there are plans to renovate an additional 235 metres of the street, a segment used by more than 2,000 people each day. “We must continue to renovate the streets in this district”, said resident Hanta Lys, “because streets made from ecological paving stones make the district look beautiful and clean. The project also provides young people with training and work. When all the paved streets have been completed, we will need to find someone to maintain the cleanliness of the streets. And we will need a ‘dinam-pokonolona’ [a fine agreed to by all the members of the community] for those who do not respect our common goods.

“The government should also provide additional rubbish bins”, Hanta Lys continues, “because just one bin for all five areas of the district really isn’t enough. There needs to be a bin every 20 metres. The government should empty the rubbish bins regularly. Otherwise the rubbish will fall back into the canal and it will overflow everywhere again.”

A vibrant but neglected neighbourhood

Antohamadinika is a “fokontany” which is full of life. It could be a very pleasant place to live, except that the rubbish is almost never collected. Also there is a lack of toilet facilities and those that do exist are in a terrible condition. All this continues to create extremely unclean living conditions for the residents. Despite everything, there is always a lot going on in the neighbourhood. There are many shops and small businesses that provide cooking, laundry, and other services.

Nevertheless, the inhabitants crave change and long for better living conditions. Naturally they want their children to grow up in a healthier environment with less poverty. They hope that, one day, people will no longer exclude them or brand them as lazy because of their poverty.

“One thing is certain”, says Charles. “We are not lazy. We have responsibilities. Every morning, we leave the house and we come back in the evening with food. Perhaps we are poor, but we are clean.”

One of ATD Fourth World’s priorities is to “promote an economy that respects people and the earth”. Often others do not recognize the skills of people living in poverty or value the ways they contribute to creating a more cohesive society.

The Antohamadinika street paving project demonstrates that by coming together and using everyone’s skills, it is possible to tackle the difficult environmental conditions caused by the public authorities’ abandoning the poorer districts.

For more information about ATD’s goal to “promote an economy that respects people and the earth”, watch the video in French.

More on ATD in Madagascar.