Taking the Floor at the UN Social Forum 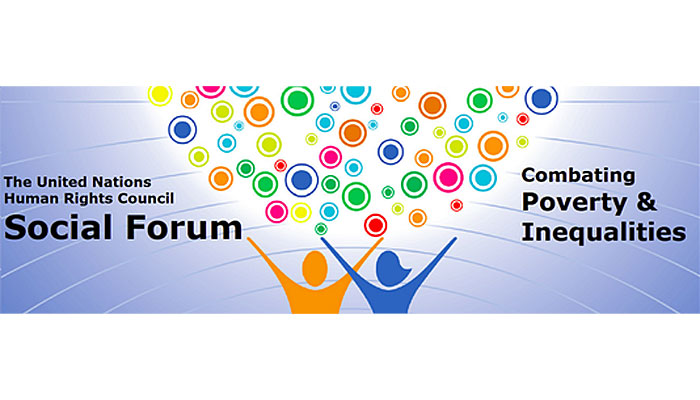 “This new school year will bring to the fore the social inequalities that harm our country and many other countries throughout the world.”

This was the opening observation by Alassane Gano, a young ATD ally from Senegal who, along with other young people, has been tutoring students who last summer had to pass their final exams under particularly difficult conditions as a result of the COVID-19 pandemic. Through a video message, he was addressing The 2020 Social Forum, which is organized in October of every year by the UN Human Rights Council in Geneva.

The UN Social Forum is a unique space for open and interactive dialogue between civil society actors, representatives of Member States, and intergovernmental organizations. The theme this year was “Good Practices, Success Stories, Lessons Learned and Current Challenges in Combating Poverty and Inequalities.” One of the challenges mentioned by Alassane was the need to put into practice the Abidjan Principles on the right to education, in consultation with people living in extreme poverty as set out in the UN Guiding Principles on Extreme Poverty and Human Rights.

As a result of the pandemic, the 2020 Human Rights Council Social Forum took place virtually, which enabled ATD Fourth World members from five countries to participate. In one of the plenary sessions, Xavier Godinot, Research Director at ATD’s Joseph Wresinski Research Centre, made a presentation on the participatory research he carried out with Oxford University on the hidden dimensions of poverty, with a focus on social and institutional maltreatment. (See UN webtv video)

Godinot defined social maltreatment as the stigmatization and discrimination suffered by people living in extreme poverty. He quoted a man from the UK who said that

Institutional maltreatment is the result of the inability of national and international institutions to respond appropriately and respectfully to the needs of those in poverty, which leads to ignoring or humiliating them.

Godinot went on to say that people living in poverty are too often treated like the planet – exploited and then abandoned when their ability to work is exhausted. In conclusion, he emphasized two points:

During the interactive discussions that followed the presentations, in addition to the above comment by Alassane Gano, Janet Nelson, ATD Vice-President, referred to the lessons learned around participation in the development of policies and programmes to address poverty. Herman Van Breen, from ATD’s International Relations team, emphasized the importance of birth registration and addressing the situation of informal workers.

These contributions had an impact, especially on Olivier De Schutter, the UN Special Rapporteur on extreme poverty and human rights, who in his concluding remarks made a point of mentioning the ATD participatory research on the hidden dimensions of poverty. In his opinion, the rhetoric that blames people in poverty for their situation is one of the major problems hindering the struggle to overcome poverty.

“Public services do not necessarily reach the poor, partly because the people whom public services are meant to reach and support sometimes do not claim the benefits they have a right to because of shame, because of a fear of social or institutional abuses, or because they do not want contact with social services that have been traumatising for them in the past. The discourse that blames people in poverty for their situation is a major reason why people do not claim the benefits they should have a right to.”

Read the statements of all participants.

The Office of the High Commissioner on Human Rights, which organized the Forum, was also very pleased that Alassane Gano had participated in this year’s Forum, for he had been one of the speakers at the 2019 Social Forum on the theme of education. They promised to try to include more young people and people with a direct experience of poverty as speakers for next year’s Forum.

More on ATD’s advocacy at the United Nations