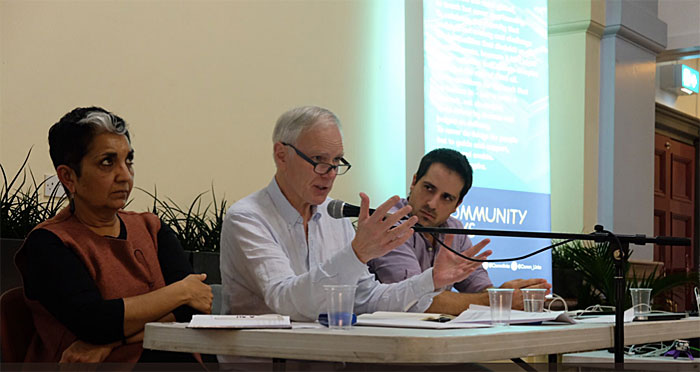 “I have never known such fear, uncertainty, trauma, panic, numbness and surrealism. I feel trapped in a parallel universe. Did the marginalised in 1930s Europe feel like this?? Every word out of our mouths is ignored or twisted and misconstrued.”

Speaking Before the Special Rapporteur

On 12 November, Cathy* and other people living in poverty spoke about their lived experience of poverty to Philip Alston, the United Nations Special Rapporteur on Extreme Poverty and Human Rights, at a Town Hall meeting in Newham, London. The UN Special Rapporteur and his team were on a twelve-day visit to the UK. Following their visit, he will write a report for the UN’s Human Rights Council. Tom Croft, a member of ATD Fourth World-UK’s national coordination team, notes “how accurately Philip Alston has sought to hear and defend the voices of those experiencing poverty at the sharp end of austerity Britain”.

Alston’s statement at the end of his visit concludes that: “Key elements of the post-war social contract are being overturned. In the process, […] great misery has been inflicted unnecessarily. […] It is the mentality that has informed many of the reforms that has brought the most misery and wrought the most harm to the fabric of British society. British compassion for those who are suffering has been replaced by a punitive, mean-spirited, and often callous approach. […] For almost one in every two children to be poor in twenty-first century Britain is not just a disgrace, but a social calamity and an economic disaster.”

“Too often, financial sanctions imposed by the Department for Work and Pensions are based on misinformation, such as when a person is punished for not having attended a required meeting — despite the fact that officials scheduled two simultaneous required meetings for the person in two different places. These sanctions are often cruelly disproportionate, such as when a single missed appointment means an entire month of benefits being withheld.

“The system seems purposefully designed in such an obstructive way that vulnerable people cannot easily challenge sanctions when they are unfairly or incorrectly imposed. Mounting an effective challenge would require extra time and know-how, just when people are stretched to the limit to try to make ends meet despite the weight of the sanction.

“The rhetoric used to justify sanctions is divisive and negatively stereotypes people on benefits. This leads the general public to view them with suspicion and mistrust. Today’s era of sanctions feels to many vulnerable people like systematic bullying by the state. The well-documented harm caused by sanctions — including hardship, debt, anxiety, and physical and mental illness — is extremely disempowering and often makes it much harder for job seekers to find paid work.”

Climate of Fear and Cruelty

Croft commented that Alston’s statement “acknowledged the climate of fear and cruelty — the violence — caused by austerity, benefits sanctions, and the whole attack in the UK on the poor and the attitudes behind it. He has also established the intimate connection between poverty and human rights in the British public debate on poverty, which has been so difficult for us to raise in a country where the media frequently undermines the concept of human rights, portraying it as something used only to defend criminals and terrorists.”

Despite the great step forward that the Special Rapporteur’s visit to the UK represents towards overcoming poverty. A significant challenge remains unacknowledged in ATD Fourth World’s view. Croft is increasingly concerned about the impact of poverty on the right to family life in Britain. And about bias in child protection services against families living in poverty, particularly those facing severe and multiple disadvantages. ATD’s statement to Alston also said:

“As documented by The Observer, at a time when poor parents most need support services to help them to provide for their children (such as libraries, community centres, children’s centres, and youth clubs), those services are being cut, resulting in more children from poor families being taken into local authority care due to ‘neglect’. But this begs the question of who exactly is neglecting whom? In our daily work with parents struggling to cope with the damaging effects of poverty, we see them increasingly boxed in and neglected by society. With no budget for early, preventative support, taking children into care is the purported solution, as the upsurge in numbers suggests. In fact, there is increasing evidence that forcibly separating children from parents itself causes lifelong emotional harm. The system of child protective services, as undervalued and underfunded as it is, can itself be neglectful and harmful to children.”

Another activist from ATD, Jane,* joined Cathy in speaking to Alston at the Newham Town Hall meeting. She said, “The way parents in poverty are treated is massively disproportionate. When you’re scrimping on the basics, you don’t have the money to cover up the cracks. The state spends money on foster care that could instead be used to help prevent the need for foster care. I used to believe that I was safe in this country and that the country would look after you in time of need. But it doesn’t.”

*A pseudonym to protect the privacy of the speaker.

To read Jane’s full statement to Alston, please see: “When the Right to Family Life Is Violated: Trust Betrayed Again and Again” on the ATD UK web site.

To read a second ATD activist’s statement to Philip Alston, see “Trapped in a Parallel Universe”.