My Turn to Read Stories to Others 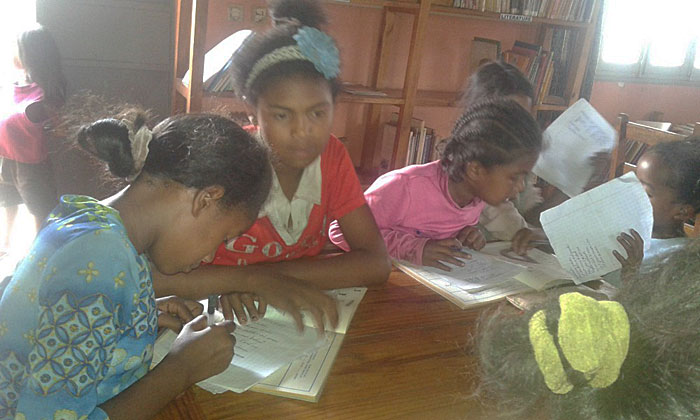 This story tells how Fanja, from the Tapori section of ATD Fourth World, makes friends with other children. Her desire to go to school grew within her.

Fanja will soon be 13 years old. She has three brothers and three sisters. Fanja comes from the countryside of Antanamalaza, Madagascar, where her parents worked as farmers and livestock breeders.

Eventually the family decided to move to Antananarivo (or Tana, as the capital city is commonly known) in order to earn more money. The parents started to sell fruit and garlic on the street to feed their children. For a time after they arrived, they went through some difficulties. They were used to a calm life in the countryside where the air is pure; and in the city, it is always noisy, and there is no security.

Not having any friends, they often thought about returning to the countryside. They weren’t able to succeed in this new life and, more and more, they felt rejected by people around them. One day, a little girl named Nadia, a bit older than Fanja, approached her. They began to talk and then play together; and every day they met to play.

Fanja often saw Nadia going to the street library. “What do you do there?” she asked. Nadia told her, “Every Wednesday afternoon, we go to the library, and we talk about the friendship between children here and all over the world. We call it Tapori. Would you like to come with us?”

So Fanja went there with Nadia and saw what the other children were doing. She had never gone to school, and so she didn’t know how to read. On the first day, she felt intimidated by the other children and she didn’t dare to make a move. But still, she felt at ease with them. She did her best to look at the multitude of images in the books; and she also made drawings, which she brought home to show her parents.

Fanja was truly happy to have made many friends. Little by little, her desire to go to school grew stronger.

The fact that she didn’t know how to read was what most made her want to go to school. Her parents, though, were not certain about enrolling her because she had a very young sister, and there was no one in the family except Fanja to care for her when the parents went to work.

In the Tapori group, we often talk about children’s rights. Fanja wanted to express what she felt and to claim her right to go to school, but she also wanted to respect her parents’ wishes.

She shared her dream with the Tapori facilitators. They visited Fanja’s parents several times, and together they discussed the young girl’s education. The parents finally agreed.

A few Tapori facilitators had accompanied Fanja’s mother to help her find a school. The mother chose to enroll Fanja and her brothers and sisters in the public primary school in Antohomadinika. The facilitators became close to Fanja’s mother during this time, and the trust between them grew.

She told them why she hadn’t educated her children: it wasn’t because of a lack of money, but because she herself didn’t know how to read or write, so she was afraid of going into the office to enroll the children in school.

Two years later, the parents had sent four of their children to school.

Fanja found herself in a small section of the school with her younger brothers and sisters, and she was the oldest in the class. Today, she isn’t ashamed, because her goal is to learn to read and write, and later to become a teacher. Fanja was so happy to be able to tell her friends, “From now on, people won’t be reading books to me anymore. It will be my turn to read to other people.”