Skip to content
Home > Participatory Research > Extreme Poverty, Violence and Peace > Understanding the violence faced by people in chronic poverty and the pathways towards peace 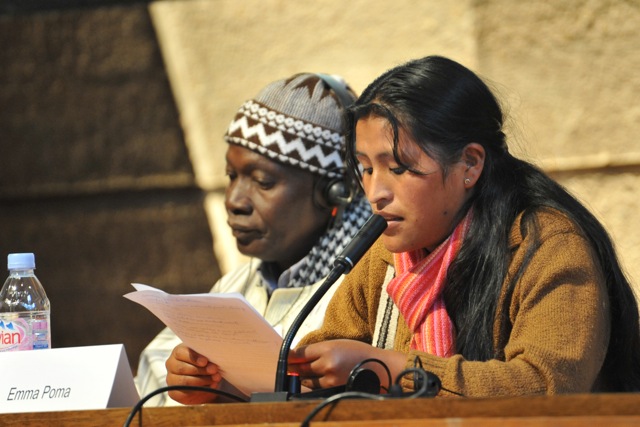 “The violence of contempt and indifference causes chronic poverty, since it inevitably leads to exclusion, to the rejection of one human being by other human beings”. This statement, by Joseph Wresinski, founder of ATD Fourth World, needs to be heard and understood by more than the participants to this international Colloquium at UNESCO House, but the whole of society in order to truly build the pathways to peace.

This event held on 26th January 2012 at UNESCO House, Paris, France, brought together over 250 participants including those in extreme poverty. Present amongst the guests was Magdalena Sepulveda, UN Special rapporteur on extreme poverty and human rights, Olivier de Schutter, UN Special rapporteur on the right to food, Marta Santos Pais, Special Representative of the United Nations Secretary-General on Violence against Children, and Federico Mayor Zaragoza, ex director-general of UNESCO and founder of the Fundacion por la Paz, in Spain.

The day was devoted to the three year participatory research project and days spent at ATD Fourth World’s international centre. “This has been a lesson in humility”, said Cécile Molinier, director of UNDP in Geneva, referring to ATD Fourth World’s core participation, and the blending of life experiences and knowledge of those who have experienced extreme poverty.

Further highlighting the importance of participation, the example of ill-adapted projects to the needs of people living in chronic poverty were discussed. Moïse Compaoré, from Burkina Faso, explained how a project thought out without the participation of those most concerned, is doomed to fail. Amanda Button, in the United Kingdom, spoke out on the violence of having her children taken away from her and put in foster care. Social services did not seek her involvement or opinion.

Martine Le Corre’s inspriring speech again emphasized the core need for participation in order to build pathways to peace. “Peace cannot be imposed. It is something we build and live, in our daily experiences”. The knowledge of those who live with the violence of poverty needs to be recognised. Once society recognises the value of this knowledge, then pathways towards peace will take on true substance.

The Colloquium ended with the opening of the art exhibition created by members of ATD Fourth World. The photos and artwork are the expression of the lived experiences of people living in extreme poverty, of the violence of poverty, and of their commitment to building peace.

Download the summary of the three days of the Colloquium