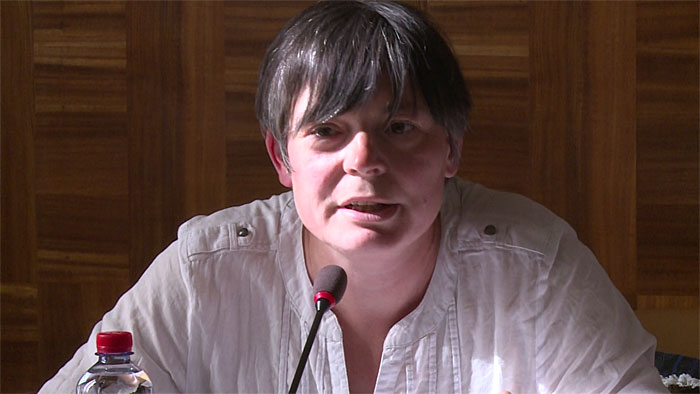 On June 8, 2017, ATD Fourth World organized a panel discussion at the UN with Philip Alston, the Special Rapporteur on Extreme Poverty and Human Rights on the subject of a universal basic income. Thirteen governments from all regions, three UN agencies and over 50 NGOs attended the event. Isabelle Doresse (photo above), the person responsible for ATD People’s Universities in the north of France, talked about the reactions of people living in extreme poverty to the idea of a universal basic income. Surprisingly, there were a number of hesitations and concerns about the idea.

The idea of providing a basic income to every member of society is one that has been gaining ground over the last years – even in Silicon Valley! It would be “basic” because everyone in a society would receive a monthly income that would provide a “floor” to help meet basic needs. And it would be “universal” because everyone would receive it, regardless of their level of income. The idea is seen as a solution to many of today’s concerns. It would help to reduce the growing disparities and it would ensure a level of financial security. In addition, it would make better use of available funds because it would eliminate the bureaucracy currently in place to implement welfare programmes. Finally, it would provide an income to people (often women) who spend much of their lives in care-giving.

The idea has gained enough ground that it was discussed in the recent French presidential campaign. And so ATD France wanted to know what people living in extreme poverty thought about the idea – after all, they were one of the main groups of beneficiaries that people had in mind.

Four meetings of ATD’s People’s University programme in France worked on the topic. In addition, a European Fourth World People’s University took place in December 2016, where participants from Belgium, France, Ireland, Netherlands, and Spain worked on a guaranteed right to the means necessary to live decently.

Interestingly, the reaction was not wild enthusiasm. The idea was welcomed as providing some clear advantages, but also some dangers.

What did people see as the advantages?

1) First, perhaps a universal basic income would reduce stigmatization. As expressed over and over again by the people with whom ATD Fourth World works in France, when you are on welfare, you are suspected of not wanting to work, of liking to live off of others, of cheating by hiding income or by lying about the family’s situation.

Receiving a basic income is not perceived as a right, but as a humiliating aid. So 35% of people who are eligible to be on welfare don’t request it, because of the lack of information and the complexity of the procedures, but also because the procedures are too intrusive and too constraining. One person said: “There are lots of indiscreet questions, when you establish a welfare file. I didn’t want to answer, but you have to talk about your private life, if you want to be helped.”

2) A universal minimum income should allow everyone to live in dignity and to have access to basic necessities; they would not be forced to make impossible choices. Extreme poverty is not only a problem of material deprivation. As stated in the UN Guiding Principles on Extreme Poverty and Human Rights: extreme poverty is the result of insecurity in several areas of life, that is persistent, and that compromises the chances for people to reclaim their rights by themselves. Extreme poverty gives people a feeling of failure and shame, and so affects their self-confidence and self-esteem.

As one participant said,

“If we constantly are running out of money, if we are in a constant state of anxiety about how we are going to make ends meet and raise our children, then we can’t live in dignity.”

3) A basic minimum income can help empower people, for it would no longer keep them in a position of dependence and insecurity.
One person said:

“I go from shelter to shelter. There’s no stability. I can’t plan for tomorrow. It makes me feel very insecure.”

“The social worker tells me to pay my rent first, but I can’t. My first choice is my daughter’s education, I pay for school and music first.”

4) People would no longer be maintained beneath the poverty line, since the current system discourages initiatives to increase their incomes.

As one man in the People’s University explained:

“During the summer holidays, my daughter had a job. When the holidays ended, she went back to the social service center to pick up the family allowance but was told she was not eligible for it because she was working, even though she provided papers proving she was no longer working. She is struggling more than before.”

Another participant provided this example:

“A girl obtained a scholarship for her studies but this scholarship was then deducted from her mother’s minimum income. It was like she had no scholarship anymore… “

A universal basic income could provide a floor on which a person can build through his or her work, however minimal that amount is. Similarly, if the person loses their income from work, a basic income could maintain his or her rights without delay and without difficulty. This means that the basic income should be allocated to each individual person, and not calculated by household.

Serious concerns were expressed about the idea in the People’s University discussions. People living in poverty would prefer to be able to live from their work. With a universal basic income, they are afraid of being permanently excluded from the world of work, to which they aspire. They are afraid they would be told, “Now, with the basic income, you have some money, we don’t want to hear from you anymore.”

A basic income would provide an income, but it does not allow for insertion into society, the recognition, the self-realization that people seek.

Also, the minimum income policy must be integrated into a comprehensive policy to eradicate extreme poverty. If we really want to fight poverty, we cannot only talk about income. The policy for the right “to an adequate means of subsistence” must be closely coordinated with policies for access to decent housing, to health care, to education, to employment… Other forms of family support would need to be maintained.

And the policies to fight extreme poverty must be designed, implemented and evaluated with the concerned people. Experiments with a universal basic income or other anti-poverty approaches should involve people living in poverty from the outset. Only then will we succeed in eradicating extreme poverty.

Video of the UN panel discussion.