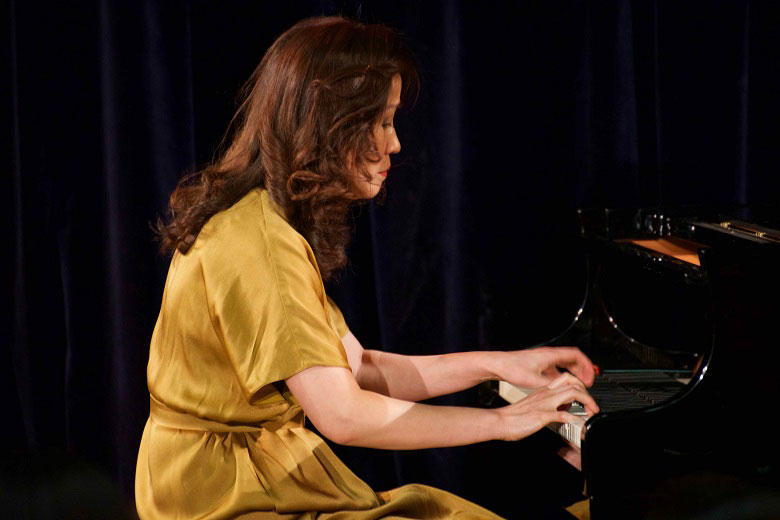 On Friday 16th June, a large audience attended the Wang Bin concert in the Richelieu amphitheatre at the Sorbonne, Paris. Among the 366 people present, many were discovering this virtuoso pianist and Chinese music, as well as her ties with ATD Fourth World, for the first time.

“I would like to offer my music to the Fourth World”

Wang Bin generously held the concert in support of cultural projects lead by ATD Fourth World throughout the world, providing access to culture and beauty for the most disadvantaged people. Isabelle Pypaert Perrin, Director General of ATD Fourth World International, explained the origins of this commitment in her introduction to the concert:

“We are pleased that so many of you have the opportunity to listen to Wang Bin tonight. She invites us on a musical journey from China to Europe. She crosses borders, seeking through music to cultivate friendship between different people. Just like Jean de Miribel, the friend who put us in contact, who brought ATD Fourth World to Wang Bin’s attention. Jean, who died in 2015, lived in China for 40 years, attracted – he said – by the wisdom and incomparable goodness of the Chinese people.

“Ten years ago, in Xian, Jean set up a meeting between Wang Bin and a small group of friends of ATD Fourth World. That day, one story touched her in particular. It was the story of a child, Joseph Wresinski, who lived with his family in a poor area of Angers, France. His father, vilified in his own neighbourhood, went to look for work far away in Poland, where he originally came from. Meanwhile Joseph’s mother stayed, alone, with her four children and fought to support her family. “One day, to the surprise of all and under the gaze of the neighbourhood, a piano arrived at the door of their home in Rue Saint-Jacques. It was Mr. Wresinski who had sent it to his family so that the children could learn to play. Perhaps he had finally found work? For Mrs Wresinski it was a promise of peace, harmony; a future that she could offer to her children through music. Who does not need grandeur, beauty, art and culture in their life? Is it not as important as bread and a roof over our heads?

“The children of the neighbourhood were delighted to come and play on the shiny black keys of the piano; its solid feet planted firmly on the washed and worn-out floor of the family home, much to the scandal of the neighbours. What, a piano in a house where there is not even electricity, where it is always cold? A piano in a family where the daily soup is donated by the nuns from the church where Joseph serves the mass every morning in exchange for two sous for his family?

“The whole district was talking about it. A piano in their house! Everyone pressured Joseph’s mother to sell it. And – as Father Joseph Wresinski would recount years later:

‘The day came when people around us began to say: If these people have a piano, it is because they have money and we must no longer help them. So my mother had to sell the piano for a ridiculous price. In exchange for help, she sold a hope. Since then, I have been jealous, as God says he is jealous in the Bible, of those who from childhood learned to love music and dance, art and poetry. I did not have that chance and all my life I suffered. Being able to offer it to the poorest became my struggle.’

“Undoubtedly, this story resonated deeply with Wang Bin, who has always said that music, a passion passed on by her mother, a singing teacher, helped her family cope with the difficulties and hardships they and many others faced in the 1970s.

“That day in Xian, after hearing the story, Wang Bin, the recipient of many international awards and accolades, said: ‘I would like to offer my music to the Fourth World.’

“And here we are tonight for this concert, the highlight of our Stop Poverty: All Together in Dignity campaign. We want to show that the world can only be built by bringing together the talents, courage and intelligence of all people, regardless of background.

“This concert was able to take place thanks to our partnership with the University of Paris 1 Sorbonne, which we thank, and it would not have been possible without the commitment and support of Patrick de Bellecisze, who took the lead in organizing tonight’s event.

“It is held under the patronage of the French National Commission for UNESCO.

“With this concert, Wang Bin wanted to pay tribute to Joseph Wresinski, the founder of ATD Fourth World, who would have been one hundred years old this year. He has paved the way for peace by encouraging us to unite with those who matter least in the world and who have the most to offer if we allow ourselves to be led by them.”