Skip to content
Home > Africa > Senegal > “We Carry on the Legacy”

“We Carry on the Legacy” 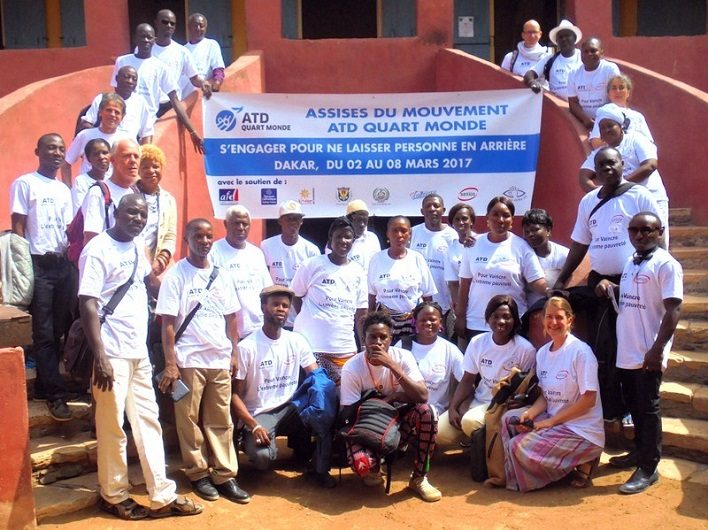 The second Inter-African General Assembly of long-term ATD Fourth World members took place in Dakar, Senegal, from 2 to 8 March 2017. A total of 32 delegates attended from Burkina Faso, Cameroon, the Central African Republic, the Democratic Republic of Congo, the Ivory Coast, Senegal, and Tanzania. Some of the delegates themselves live with a high degree of insecurity; others enjoy social stability, and support the former in their desire for a dignified life.

The discussions built on the issues laid out at a first meeting held in Bangui (Central African Republic) in July 2016, and on preparatory work undertaken by each delegation in their home country. Two main themes were identified by this assembly of long-term African members of ATD Fourth World:

It was quite something to take part in this Dakar meeting in the year that marks the centenary of Joseph Wresinski’s birth. On behalf of the event’s regional organising committee, El Hadj reminded us in his opening address :

“Senegal was the last country that Father Joseph visited – in 1987, a few months before he passed away. Meeting here gives us an opportunity to better understand the path that he took and ensure that it continues. To that end, we will strive to get to know our founder better.”

A legacy of standing against the injustice of poverty

A quote by Wresinski, positioning ATD Fourth World members as activists who carry on the work of leading humanitarians of the past, set the tone for the discussion: “We are all guardians of the legacy of love and of standing against the injustice of poverty, left to us by the generations which came before us. We are all students of Gandhi, of Martin Luther King and of Raoul Follereau. We are all students of history’s great messengers. It is very important to realise that we are simply continuing their work because that keeps us from acting above ourselves. You need a lot of humility when you are surrounded by poverty, to ensure that you do not put yourself in the lead, and do not always think that you are right. You need to know how to listen.”

Wresinski was always reminding people that those who are the first to take action to stand against poverty are those who endure it. This is what he makes clear in the message he left in the guest book at the Maison des Esclaves (The House of Slaves memorial) on Gorée Island where this meeting’s delegates went to reflect. Wresinski’s message is reproduced on a plaque in the courtyard:

Today millions and millions of men, women and children say no to shame and misery because, in days gone by, those enslaved by the powerful steadfastly maintained in their hearts and souls that they were dignified members of humankind. And over three centuries many were those that perished so that no-one would ever forget it. “We carry on the legacy,” reiterated sociologist Djiby Diakhaté of the African Institute of Management. Invited to the round table that brought our discussions to a close, Professor Diakhaté related ATD Fourth World’s research to the work of authors, philosophers, thinkers and politicians of Africa and elsewhere who, during their time, reminded their fellow citizens that what is important is Humankind.

Leave no one behind

Sometimes you need time to let yourself to be transformed, and, alone, you feel powerless. The workshops enabled participants to identify measures taken in the struggle to overcome poverty that have led to significant changes, and to talk about the activities and knowledge which have made it possible.

“When I was with ATD Fourth World in Burkina Faso I befriended a child who lived on the streets. At first I found it difficult to go with him to where he slept. I have a job and work hard for what I’ve got. So I had to break something inside me. I had to kill off this character in me who found it difficult to accept a fellow human being living in such dehumanising circumstances. He had millet sacks on the ground for a bed and no access to clean water. He lived surrounded by prostitutes openly soliciting for business. If this change hadn’t taken place in me, I could not have befriended these children. If you don’t let that character die and leave it behind, you can’t go forward. You have to get rid of a lot of prejudices.”

“My work is to teach the young people who live in extreme poverty, who steal and smoke weed. They scare people. I reach out to them and tell them they can make something of their lives. When they first come to work in the training centre at the blacksmith’s workshop that I have set up, they are always intent on stealing. Hammers and other tools disappear. My own children ask me to kick them out. But I tell them that we want these young people to become honest, upright men. When I learnt about Father Joseph’s life, I realised that even if you win a battle the hurt is still there. The objective is to see things through to the very end. Father Joseph had boundless patience and love. The young people benefit from having a skill. They even end up being able to make the very hammers that they would steal at the beginning. Plus, they will support a new batch of apprentices who will perhaps act like thieves themselves. But because I didn’t kick them out, they won’t kick out the new arrivals either.”

“What makes a carpet beautiful is the variety of colours it contains.”

To be co-responsible means sharing responsibility in the decisions affecting ATD Fourth World. Guillaume gave the example of the evaluation and planning steering group in the Central African Republic. He pointed out the important aspects that allowed members to work together and share responsibility: “We had the courage to see the job through to the end even though life in our country was not easy. We had prepared. We had a methodology, an approach, interviews. We tried to understand what others were saying before presenting our own case. We took a lot of time so as to understand one another, because our ways of speaking were so different. We dared to question one another. No-one decided anything on their own.”

This sharing of responsibility among the diverse members of ATD Fourth World can also impact their relationships in other areas – at work, for example:

“I am a porter at the harbour market. We have a very authoritarian boss who does hardly any work herself, but demands a ‘report’ from each of us at the end of the day – a payment of half of all that you have earned that day. When she was ill she demanded contributions of around 20,000 Congolese Francs. We said to ourselves that the decision ought to be a collective one of all the members. That is the kind of governance we need to move forward and to avoid mistrust.

“I shared with my fellow porters the work we have done on the governance of ATD, which stresses the importance of the input and agreement of all involved. There is no big boss issuing orders to the detriment of others. Sharing this experience enabled me to let others know about our movement and its achievements. The time I spend with ATD Fourth World is never wasted, nor is it ever just theory, because what we experience within ATD, we put to use elsewhere.” -Louise (DRCongo)

The youngest delegate, Pape Mody from Senegal, concluded by reminding us: “[Malian philosopher]Amadou Hampaté Bâ stated that what makes a carpet beautiful is the variety of colours that it contains. So to make sure that we leave no one behind we have to cooperate, come what may, right now, starting today. Because poverty still exists. This meeting has been a time for us to regroup in uniting to overcome poverty. Cooperating is co-responsibility.”

At the end of this week of encounters in Dakar, both those for whom life is a painful daily struggle, and those who enjoy a stable social situation, reported that they had learnt a huge amount. This General Assembly of long-time members is not the end of the road, however. It was a chance to gain strength to keep building on the work already underway, and to mobilise others to join a long-term endeavour. F. from Burkina Faso summed up the sentiment:

“I came here as a shadow, a shadow of the families in Ouagadougou. And my presence here was a reminder to other delegates, and to myself, that there are other people who are even more forgotten. We’re making efforts, of course, but in light of the deprivation experienced by the most excluded, it sometimes seems as if we are just playing games. We talk about the future, but those who suffer are talking about the here and now. But the solidarity which is evident in what we have heard at this meeting from Mama Louise, from Reuben and from others, and what we have heard about the efforts being made, has given me hope.”