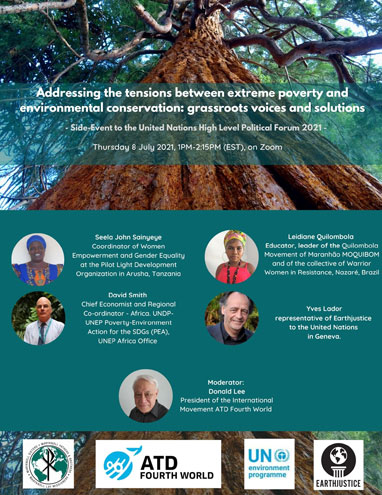 Addressing the tensions between extreme poverty and environmental conservation: grassroots voices and solutions

On July 8, 2021, the International Movement ATD Fourth World hosted a virtual side event on the margins of the High Level Political Forum 2021, the main UN platform assessing progress in the implementation of the Agenda 2030 for Sustainable Development in the context of the Decade for Action. This webinar, dedicated to addressing the tensions between environmental conservation and local communities living in poverty, was a space for the participation of powerful Indigenous and local activists who shared some of the struggles their communities face regarding their land, resources, freedom and identity. Fellow panelists were two professionals, one in the field of human rights and environmental justice, and the other on environmental management and sustainable development.

Together, they led a rich and complex conversation connecting the local to the global, and asking the audience thought-provoking questions about whose lands are ”protected” and the reasons behind it, how this can negatively impact local communities and right holders, and what can be done differently in the future.

Leidiane Quilombola, Educator, leader of the Quilombola Movement of Maranhão MOQUIBOM and of the collective of Warrior Women in Resistance, Nazaré, Brazil

Leidiane Quilombola opened the conversation with an acknowledgement of her origins within her Quilombola community, as a descendant of slaves from Africa and Indigenous ancestors from the country now known as Brazil. As a leader of the Quilombola Movement of Maranhão, Leidiane knows from experience of the various challenges that her community is fighting against. Leidiane explained that illegal extractive activities and deforestation on the Quilombola territory affect the spiritual connection of her community with their territory. Since the community relies on the land for self-sustenance and identity expression, this connection to the territory is vital. Further, Leidiane highlighted that, through deception and lack of consultation, the government encroaches on their territory to implement agro-forestry and other development projects.

Leidiane is also part of MOQUIBOM, the Collective of Women Warriors in Resistance, and in her talk she consistently connected her community’s struggle with women’s empowerment. She also emphasized that taking back education (Retomada, meaning Retaking) is a major part of resisting oppression and conserving the identity of the Quilombola communities.

Leidiane finished with a song dedicated to the freedom of the territory and a message of togetherness across borders.

“Presently in the Maasai districts, more than 80 percent of the population lives below the poverty line, where traditionally Maasai pastoralists were prosperous and self-reliant.”

Seela, via video message, presented the life and challenges faced by the Maasai communities in Tanzania. As pastoralists, Maasai are highly dependent on large open areas of land where their cattle can graze. Seela explained that the peace experienced by the Maasai between wildlife, nature and their community has been disrupted by external pressures and interests, such as national conservation areas, tourism, small and large scale farming, land grabbing, and mining areas, pushing many pastoralists away from their lands and causing them to gradually lose their traditions and cultural practices. For example, as natural conservationists, Maasai used to know how to survive a drought thanks to knowledge inherited from ancestors and freedom of movement. Today, with the combination of climate change as well as the loss of open spaces of land, forests and natural water sources, traditional knowledge is not enough to survive.

Some men leave pastoral life to look for work in the city, often leading to increased rates of poverty and HIV-Aids infections. This adds more burden and responsibilities on Maasai women who, without herds or lands, have to resort to cutting down trees to make charcoal and selling it for survival. Seela insisted that this harmful practice was not a natural part of Maasai women’s lives, and led to overwork, poor health, and harassment by forest preserve officers.

Against this backdrop, Seela emphasized the efforts of her organization, Pilot Light Development Organization (PILIDO), and the project ‘Light For Women’ she coordinates, which focuses on small-scale entrepreneurship projects for women, microfinance loans, the Share a Goat project, and securing title deeds to women’s plots. The project also helps raise awareness of land tenure rights, gender rights, child rights, and environmental rights. For Seela, the only solution in the long term is to invest in projects allowing for sustainable development.

Yves Lador, representative of Earthjustice to the United Nations in Geneva

Yves Lador’s contribution helped to connect Leidyane and Seela’s experiences with the conservation processes being undertaken by UN bodies. In particular, he delved into the UN’s 30×30 plan, which aims to protect 30% of land and water on Earth by 2030. Yves explained that ecosystems need space and time in order to be self-sustained, which is what the 30×30 plan aims to provide in order to counter human activity that causes ecosystems to collapse. However, such a plan must carefully consider where and why an area is being protected, and how it would affect local right-holders. Land conservation practices should take into account the right to self-determination of communities whose livelihoods are tied to those areas. Yves made a strong case for respecting the human rights of Indigenous communities, not for their role as custodians of the land, but as equal right-holders.

Yves hopes that the Convention on Biodiversity, which was set to take place in 2020 but has been delayed due to the pandemic, will decide on a new agenda that can tackle the relevant questions posed by the 30×30 plan, while highlighting the issues of the human rights and livelihoods of communities living off of the land.

Yves finished with an example of land protection that is based on meaningful dialogue between scientific and traditional knowledge. In New Zealand, the Whanganui river has been granted rights, and is now being managed by both representatives of the state and of the Mauri.

“If people are treated with respect and their needs are met, they are far more likely to succeed and be sustainable in managing forests and lands.”

David Smith from UNEP regional office in Africa started with highlighting a necessary shift in language, explaining his preference for ‘sustainable management’ over concepts such as ‘preservation’ or ‘conservation’, the latter words suggesting that local communities are ‘locked out’ in these natural areas. To reduce the potential for conflict between land preservation and livelihoods, and to reconcile it with the overarching objective of the Agenda 2030 to eradicate poverty, UNEP uses a tool of comprehensive economic analysis that demonstrates how dependent people living in poverty are on the environment and natural resources. For example, in Malawi, 18% of household income comes from the forest. If a government restricts access to the forest, this would immediately deprive local communities of 18% of their income, which would be devastating for people who are already poor.

Further, David pointed to the need for both quantitative and qualitative disaggregated data between men and women to understand who has the control over how natural resources are used.

David closed by explaining that the UN cannot impose but only convince decision makers in key ministries such as ministries of planning, finance or agriculture to adopt this equitable benefit sharing model, as the decisions they make have the most impact on the environment and communities.

Highlights and Questions from the Q&A Discussion:

To read the report in PDF version, please click HERE.