Creating a Movement Against Poverty 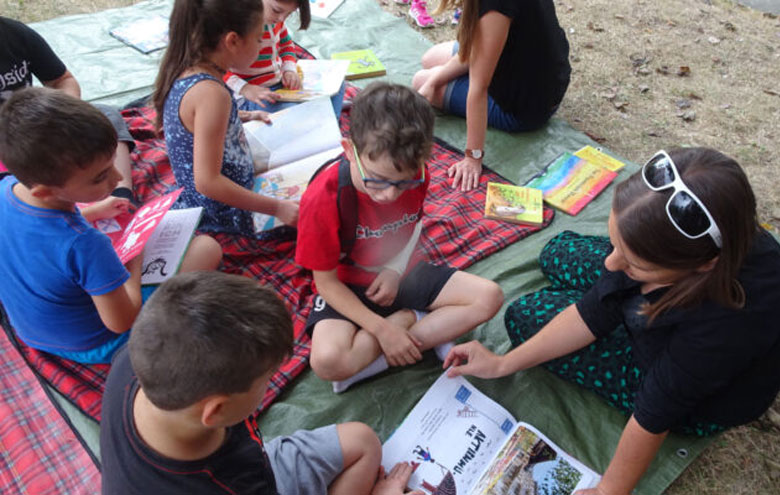 Above: Street Library in Basel.

Michael Zeier is an Ally and member of ATD Fourth World Switzerland’s national coordination team. In this interview, he talks about ATD’s decades long effort to remain a movement guided by people with a lived experience of poverty. From children’s projects to research and political advocacy, Michael says, the goal is “not to teach but to learn together”.

Where does ATD Switzerland work and what activities are there?

We work in Geneva, Basel, the Fribourg region, and Rorschach in Eastern Switzerland. Our activities don’t just address everyday difficulties of poverty, but also structural problems and political advocacy. Everything we do is based on the ideas of people with a lived experience of poverty.

One of our goals in Switzerland is a National Strategy Against Poverty that is based on the ideas of people living in poverty.

And we want to change the way they are treated at the national and local levels by governmental and non-governmental institutions. Our central idea is that policy should come from the perspective of people who actually live in poverty. And ATD doesn’t just ask people living in poverty their opinions. Rather, we work with them to make their ideas a reality.

What is your job?

I work at the national centre in Treyvaux and I’m on the three member national coordination team. This team consists of an Activist with lived experience of poverty, a Volunteer Corps member, and me as an Ally.

I also coordinate the Poverty-Identity-Society participatory action research project, which brings together people from different parts of society (a technique called Merging Knowledge). Together we study what has to change so that structural problems like poverty don’t persist over generations. The project involves people with an experience of poverty, of course. But we also include people from different scientific fields as well as professionals like social workers, lawyers, psychologists, public health workers, and others.

What motivates you to do this work?

I once worked with people living on the street. While doing this, I saw that things need to change on a bigger scale so poverty doesn’t continue to exist.

I think the ATD approach is really different because it’s not about other people knowing what’s best for people in poverty.

Rather, it’s trying to create ways of collaborating to bring about change. So that’s really what motivates me.

Can you give examples of some ATD activities?

In Basel and Geneva we have Street Libraries. Once a week, a team goes to different neighbourhoods there. They place a blanket on the ground and read books with children or do other activities.

The goal is not to teach but to learn together. We want to bring a different approach to learning, to create something different from what the children do in school. Sometimes there are children with school or language difficulties. It’s about creating a safe space where everyone can bloom.

Another example is the People’s University for the Poverty-Identity-Society project. In the People’s University, adults with an experience of poverty from different regions of Switzerland come together. Here at the Treyvaux national centre we all discuss a topic together. Then we develop a broader shared understanding based on different people’s perspectives and experiences. Because people prepare beforehand, it’s also a kind of training for speaking in public.

What are the main challenges?

One of our main concerns is to always be a movement based on people with a lived experience of poverty. There are a lot of people in ATD who don’t have a direct experience of poverty themselves. For example, there are Allies like myself and many Volunteer Corps members. So we are always asking ourselves how we can make sure our activities and ideas come from people who have experienced poverty.

How do you answer that question?

By always rethinking how we work and what methods we use. I’m not sure if we do this enough. It’s really important that we don’t just keep doing the same things, without reconsidering if we’re doing it right. When we come together in our main gatherings, it’s always with people living in poverty. Together we call into question ATD’s various projects and activities. Are we on the right path? But it’s not easy.

Another important aspect of ATD is that we try to find a place for everyone.

We don’t say, “You have to have these skills and if you don’t, you can’t work with us”. Rather, we say, “We appreciate your willingness to be part of ATD and we’ll find something for you to do”. Or we might ask, “Maybe you have an idea of what you can do?”

How do you make the voices of people in poverty heard?

By changing the way we work. For example, people from various universities and organisations participate in Poverty-Identity-Society. Through taking part in this project, we hope they see that they can do things differently. We are trying to understand how organisations today contribute to poverty being passed from generation to generation. That’s something we see very clearly through working with people in poverty – or people with an experience of poverty, as we say.

For example, someone in poverty might think, “It’s my fault that I’m in this situation”. But then, at a People’s University, they see other people having the same experience. They realise it’s not just them. Rather, it’s structures in society that are responsible for them not being able to get out of their situation.

And that’s a powerful thing — to see what structures contribute to the fact that you’re stuck in a particular situation. And it’s equally powerful to realise that by bringing our forces together we can be much stronger and accomplish real change.

This interview  first published as “To create a movement of people fighting against poverty” and has been edited.

More on ATD in Switzerland

More on ATD Fourth World Allies around the world