Skip to content
Home > Djynamo > What are the Djynamo youth up to? Highlights from their weekend

What are the Djynamo youth up to? Highlights from their weekend 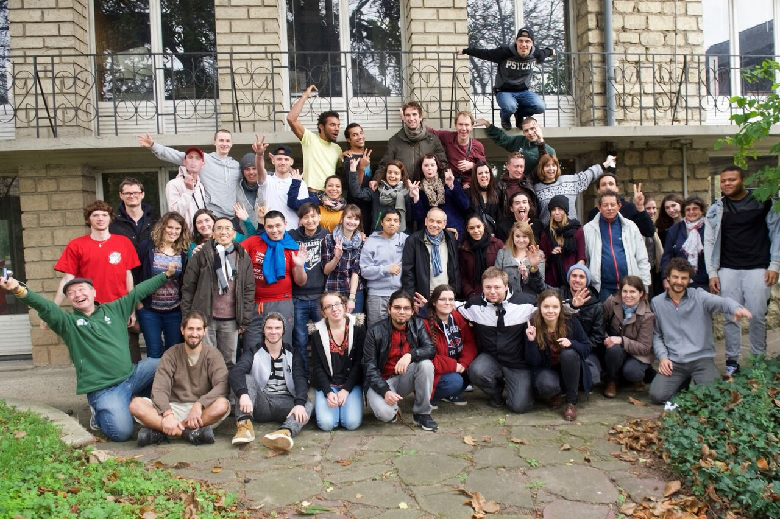 Twice a year, dynamic European youth from ATD Fourth World, known as Djynamo, gather to exchange news, ideas and coordinate their actions. On 14-15 November 2015, the second Djynamo weekend of the year took place. It brought together 45 young people from Belgium, Spain, France, Ireland, Poland, and Switzerland.

The weekend started with an exchange of news and events, each group shared their actions over the months leading up to the weekend.

In the afternoon youth split into four groups for four different workshops.

Background on the COP21 and a debate about the fight against global warming and overcoming poverty. In Switzerland, people try and leave as much room as possible for youth in situations of exclusion or extreme poverty. So that they feel like they are taking responsibility for their lives and advancing their own goals. How can youth have more involvement in their own goals? We must take into account their opinions, what they really want to do and what they expect from those that help them. Then, after putting together the various ideas and priorities, set target dates. With this kind of “scheduling” young people know what they face and can look beyond just the next day. This will make them want to go ahead and make plans because they will feel more involved in their own goals.
It is important that youth reach outside their own circle to see how others do things.
Is it required to have a leader? And if so how should he or she act? We came to the conclusion that the difference between a “leader” or “driving force” was that the “driving force” had no more power than others and they cannot make decisions as a “leader” could.

A game on communication and cultural differences:

The group was divided in two: a group of engineers and a group of Djynamiens. The engineers had to build a bridge to connect two Djynamienne valleys, and for that they needed Djynamienne labor. Engineers and Djynamiens did not speak the same language, and they had very different cultural codes. For example to greet a Djynamien with a handshake is a serious offense, engineers had to learn as they went.
Participants in this workshop enjoyed the game.
One said: “When you’re supposed to do something we often do not consider that others might have different cultural codes and opinions, one is convinced of the way we do and how things should be.”
Another said: “Despite our differences we can build things together.”

During summer 2016 Djynamo Europe is organizing a European meeting for young people from ATD Fourth World. During the weekend, organizers wanted to take advantage of the presence of these young people to think about some of the possible themes and topics that could be brought up in the summer. The group made several proposals: These proposals were presented on Sunday morning and voted on by the youth. Seven people were in a room, each represented a topic. Youth walked around the room and were able to talk to the person representing each topic. Youth then stood by the topic that interested them the most. This was the voting process. The theme of sexuality and gender won narrowly after many walks around the room. So the European meeting in summer 2016 will be on this theme. The other themes won’t be forgotten and they will be talked about at a later date.

Following Sunday morning, the youth talked bout their groups on Saturday afternoon, and then everybody evaluated the weekend. In the afternoon the delegations began to leave while others were responsible for cleaning the premises.
Meetings were planned for a weekend in spring 2016 and to keep up-to-date on the different projects.