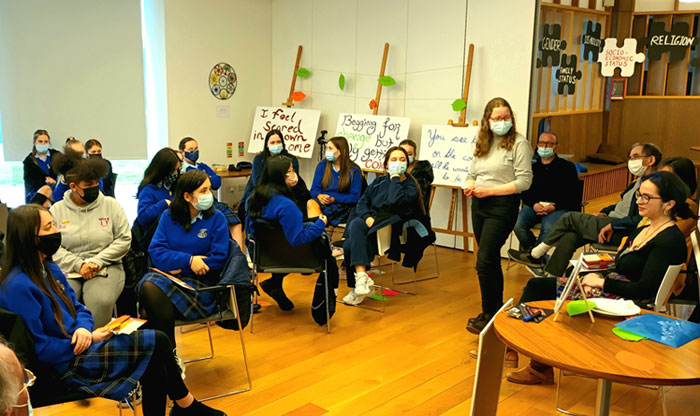 In February, ATD Ireland ran a series of workshops* on “Understanding the Hidden Dimensions of Poverty”. These “Dignity in Dialogue” conversations raised awareness of poverty, its various causes and, in particular, the hidden dimensions of persistent poverty. Input from people with a lived experience of poverty was at the heart of these in-person and online conversations.

Hearing first-hand stories helped participants understand the struggles that undermine the dignity of people in poverty. Workshop conversations highlighted deeply rooted inequality as well as injustices made even more apparent by the COVID pandemic. One workshop at a secondary school in Dublin illustrates the impact of these conversations.

The students then talked about a tree graphic created by an ATD activist who has lived in poverty. When workshop leaders asked students what they thought about the graphic, one pointed out how lonely the person sitting on the box looked. This sparked a conversation about how people in poverty feel isolated or as if they have a weight on their shoulders. Society, the students stated, may force people to appear a certain way on the outside even when there is a lot going on inside.

Factors outside their control

Pointing to the tree’s roots, another student suggested that deep systematic factors outside a person in poverty’s control actually determine much of their experience. These factors, the student added, could include structural inequalities, politics, economics, and lack of opportunity.

A person’s life, the students said, could be rooted in inequality and unjust power dynamics that limit individual opportunity. Students also noted the connection between lack of choice and limited access to services and education. All these factors lead to financial uncertainty that is detrimental to quality of life and well-being.

In this context, the students brought up the interconnectedness of mental, physical, and emotional health. Poor health, discrimination, and a lack of security may lead to depression, addiction, homelessness, prison, and institutional intervention. Yet students also mentioned the possibility for hope, resilience, determination, joy, creativity, and family. Above all, they emphasized the core value of love, represented by the leaves at the top of the tree.

“What does poverty mean to you?”

Following this conversation, students watched the ATD Ireland video, “What does poverty mean to you?” featuring community activists, some with direct experiences of poverty. Highlighting what struck them most, students mentioned,

Students learned about the issue of socio-economic discrimination, not currently part of Irish equality legislation. Then they visited the “Socio-Economic Discrimination: Through the Creative Lens” exhibition of creative work produced during the Covid lockdown. Then students watched a powerful “Lockdown Liberties” video clip in which a person with a lived experience of poverty read a poem they had written based on their life. One student commented that,

“One of the lines in the poem that struck me was ‘would Santa believe me if I told him I was never bold’ because I think that there is this stereotype around homeless people and people like that, that they done stuff to get themselves in that situation whereas that’s not necessarily the case.”

Finally, workshop leaders asked students to write their hopes on leaf shaped papers, which they then hung on a future tree of hope. When asked what changes they could go out and make themselves, the students had plenty to say:

Lastly, students talked about what they could do to bring about these changes. Here again, they had plenty of ideas: