World Day for Overcoming Poverty at UN in New York 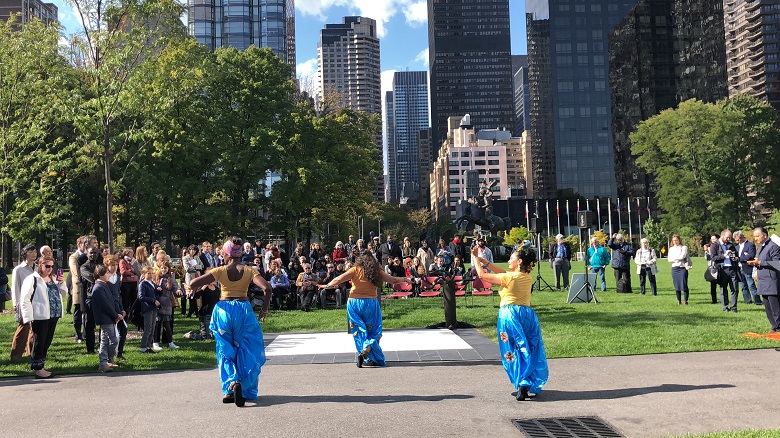 “Ending poverty is not a matter of charity but a question of justice.”

– United Nations Secretary-General António Guterres in his message to the world for the International Day for the Eradication of Poverty.

By choosing to deliver his message during the commemoration organized by ATD Fourth World and its UN partners, held this year in the main UN building lobby, Guterres put the event in the spotlight. Several ambassadors and the president of the UN Economic and Social Council (ECOSOC) took part in the commemoration along with António Guterres, who stated, “We must listen to the millions of people experiencing poverty and destitution across the globe, tackle the power structures that prevent their inclusion in society, and address the indignities they face.”

François Delattre, France’s Ambassador to the United Nations, added “October 17 provides a unique opportunity for the world to listen to individuals living in extreme poverty. They are key partners for peace, development, human rights and dignity.”

Activists from Tanzania, Kenya, and the United States

A number of speakers addressed the gathering, all of whom had experienced exclusion and encountered obstacles when trying to participate in society.

Patrick Matara described his despair when he could no longer afford to continue his education, then his good fortune to receive a scholarship. Today, he continues to support children with little hope for the future in Africa’s largest slum, on the outskirts of Nairobi.

Stacy White, from New York City, talked about living in a shelter for the homeless and how, despite her problems, she helps those around her.

Kim Cook, from Boston, emphasized that, “in the end, welfare keeps people in poverty.” Drawing on her own experience, she explained: “If you have more than two thousand dollars in your bank account, you no longer qualify for welfare, but you have to have more than two thousand dollars to be able to rent an apartment and change your life.” Her words made a strong impression.

Salehe Seif came from Tanzania to speak on behalf of an ATD member who had been denied a visa to come to the UN. She made that denial the focus of her message: “Because of poverty, because of mistrust based merely on economic status, people who are living in poverty cannot attend or express themselves. Their rights are not respected.” Following the ceremony, commemoration participants gathered around the Esplanade in the UN garden for dance performances and the reading of a poem by an ATD member who had died recently, accompanied by the UN orchestra.

Because 2018 is the 70th anniversary of the Universal Declaration of Human Rights, a magnificent tree made of wire mesh and paper mache stood in the garden, symbolizing the various rights that serve as the foundation for protecting human dignity and fighting exclusion. Each participant was invited to add a leaf to the human rights tree illustrating their personal commitment to defend rights in order to put an end to poverty.

Conversation with the High Commissioner for Human Rights

ATD’s four speakers then attended a special dialogue organized by the UN’s Department of Social Affairs and the High Commission for Human Rights. They explained to the High Commissioner, Craig Mokhiber, how important it is for them to be involved in making decisions that concern them. The ATD members described the negative consequences they have experienced when unable to participate in these decisions.

The High Commissioner for Human Rights responded by describing the particular legal human rights that had been violated in the examples each person described. He then called on the representatives of the various bodies present to talk about what they planned to do to involve people experiencing poverty in the UN’s work.

More about the World Day for Overcoming Poverty.