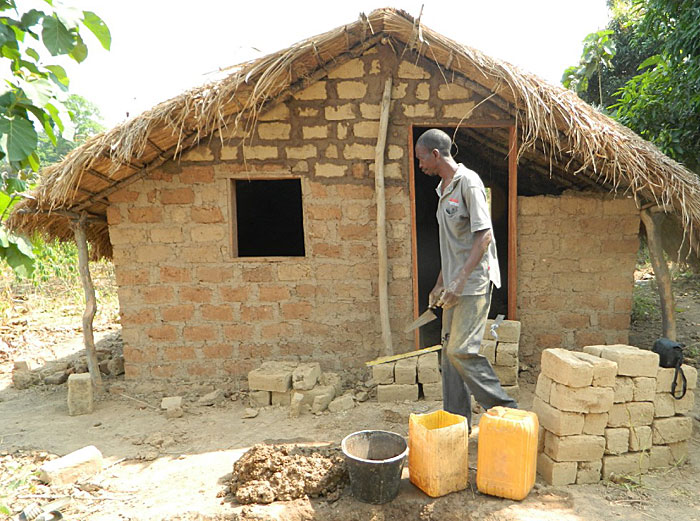 In 2017, ATD Fourth World invited people around the world to document real-life “Stories of Change”. These stories are about situations of injustice and exclusion caused by extreme poverty. In them, activists, community leaders, and others show that when people work together, real change can happen.
More about “Stories of Change”.

A community comes together to help a man build a new home for his family after eviction.

In a rural village near Bangui, the capital of Central African Republic, a family found itself on the street after someone sold their home without telling them. They began to look for a place where they could maybe build a little straw house. This happened in January 2016.

The father of the family is an ATD Fourth World activist and helps coordinate the Street Library in the village. When his friends learned what had happened, they organized a solidarity workshop. From April to September, 10 coordinators helped make earth bricks and sew the roof straw for a new house.

By December, the group had produced 800 earth bricks. The challenge of actually building the house inspired the family’s young friends. The leader, named Ruffin, coordinated the construction. Groups of three young people took turns building the walls of a two-room house. During two months, they worked two days a week, usually on weekends.

An Opportunity to Give Back and to Share Skills

Mr Charles, another ATD Fourth World activist, joined the young people as they worked on the new house. When Mr. Charles was young, he had learned masonry and other building trades at ATD’s “Courtyard of a Hundred Trades” in Bangui’s town centre. Thirty years later, it was his turn to show young people what others had taught him.

“This father was evicted”, Mr Charles explained. “He was staying with family, which bothered him a lot. In my heart I said to myself that I had started with ATD Fourth World in order to help people like this gentleman. If he can rest comfortably then I will be happy”.

Ruffin saw how important it is to have a living space where one can be comfortable. He has saw how this father made friends in his new neighbourhood, five kilometres away from where he lost his home a year ago.

“The neighbours also call me ‘son’”, Ruffin explained. “They are happy to have this new neighbour. When we young people come to work here, we always greet everyone. There is a neighbour who is a mason and he advises us.”

At the end of December, the walls and the floor tamping were finished. Ruffin organized an “opening ceremony” in May 2017 (over a year after the eviction). He gathered together everyone who had worked to build the new house. The Village Chief came to the ceremony and there were songs and dances. The event helped the father show his neighbours that his friends are their friends now.

A New House in a New Home

In his new neighbourhood, he dreamed aloud, “With a book each week, I could also give the children of this village the desire to set-up a Street Library!” 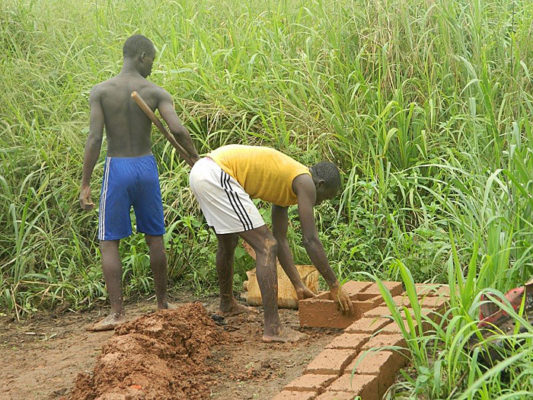