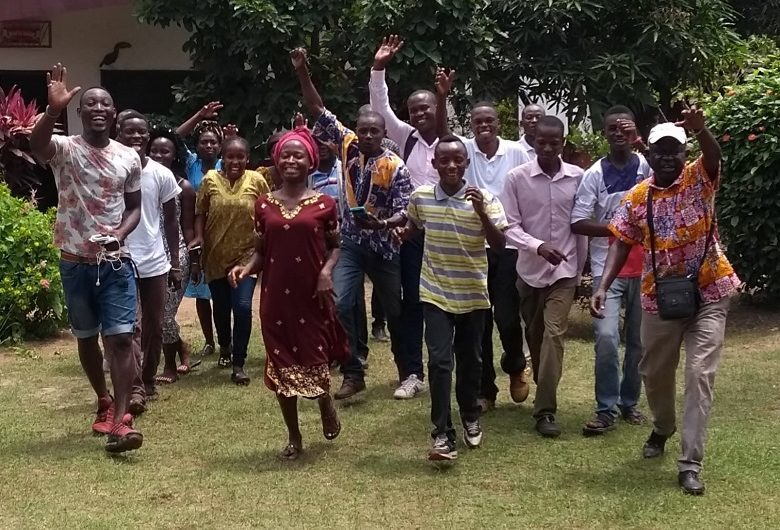 From March 2018 to February 2019, five young women and seven young men participated in a Social and Cultural Mediation training program in the Central African Republic. Organised by ATD Fourth World and its partners, the program began with its first group of young people in 2016.

This initial group of young trainees worked in various ways to promote peace in their communities and counter the violence that has ravaged the country. They came from places whose names still evoke grief, suffering, and exile. Yet the young people in the training program seek to re-establish connections between people and restore hope. Their goal is to disarm antagonism, with a focus on people most affected by poverty. Some of the young people brought books and games, hoping to gather children in an environment where they can believe in themselves and dream of a better life. Others came empty-handed, hoping find a more meaningful way of living.

A program of theory and practice

Training program leaders include professors from the University of Bangui, members of the ATD Fourth World Volunteer Corps, and other people involved in work on poverty and human rights issues. The program supports young people’s enthusiasm by providing various tools that help them become more involved in their community. These tools help the trainees identify and understand problems, then create a project that unites people around a common solution.

The training itself alternates between theory and practice, covering various topics. These include anthropology, history, psychology, and project management techniques. Trainees also learn practical skills such as French, computer science and administrative writing. In addition, trainees get job experience through two one-month internships in local organizations.

An ethical approach to addressing poverty

An important aspect of program was the design, implementation and evaluation of cultural and citizen outreach activities that focus on how best to become involved in the community. The training emphasises an ethical approach to addressing poverty. This involves recognizing the equality and dignity of each person and the importance of seeing people in poverty as partners who also want social change and sustainable peace. Use of the United Nations Guiding Principles on Extreme Poverty and Human Rights and the implementation manual “Making Human Rights a Reality for People Experiencing Extreme Poverty” was a critical element of the program.

One important goal of the training program is helping trainees learn ways to build bridges within society in order to help people of all ages live together peacefully. Using integrated methods that involve both discretion and perseverance, the trainees sought to create an atmosphere of peace in the communities where they worked. The young people faced various challenges related to problems of everyday life and the many unsettling events that took place in their country during 2018.

The main criterion for selecting young people was their commitment to the training program. Participants ranged in age from grade 9 to the first year of high school. However, the age range did not prove to be an obstacle. All had experience with volunteer work and managed to master the theoretical elements of the training.

Graduation and plans for the future

The 12-month training program came to an end with a three-day seminar where the young people presented their projects. These included work they hoped to do in the future and demonstrated how attached the trainees had become to the neighbourhoods where they were working. The seminar audience included university professors, students, mediators from the first training course, and other people involved in related associations.

Four areas of focus emerged during the seminar: education, youth, community and family, and free movement and choice of residence. In addition, the trainees identified a need to look at questions of gender across all the focus areas. During the seminar, the audience gave examples from their own experience and expressed support for the young people’s enthusiasm. The trainees all talked about wanting to work together in the future. They also expressed their hope that the Social and Cultural Mediator training would gain additional recognition.

At the end of the seminar, ATD Fourth World said how pleased the organisation is that there is a growing network of social and cultural mediators in the country. Plans are in the works for an action seminar to learn from this experiment. This seminar will also develop a plan to further promote social and cultural mediation with a focus on using the United Nations Guidelines on Extreme Poverty and Human Rights. ATD announced that the University of Banqui plans to launch a Masters program in cultural mediation. In addition the École Nationale Supérieure has designated an educator to become responsible for mediation at the school. 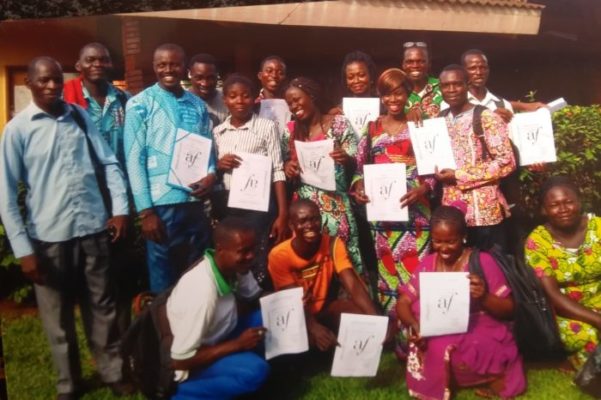 It was an honour for Amira, Delphin, Eben-Nezer, Enock, Fiacre, Guémine, Jean-Bertrand, Martine, Modeste, Odile, Sadia and Yannick to receive their Social and Cultural Mediator diplomas from two representatives of the Central African Agency for Vocational Training and Employment (ACFPE), two university professors and Charles Ngafo, a leading activist with ATD Fourth World.

The seminar ended with a performance of Zo Kwe Zo (“Everyone is a person”), a hymn promoting peace, followed by a moment of silence in memory of those who had lost their lives to violence, poverty, and disease in the past year.

ATD Fourth World thanks the members of the Central African Republic Volunteer Corps and the coordinators of the project. Thanks also go to the following partner organisations: ACFPE, Caritas France, the French Development Agency (AFD) and the French Embassy in Bangui. For six months, the project also benefited from brainstorming workshops and technical recommendations of the Solidarity Fund for Innovative Projects set up by the French Embassy in partnership with the ACFPE.