Skip to content
Home > Africa > Tanzania > In Africa: Women and Speaking Out

In Africa: Women and Speaking Out 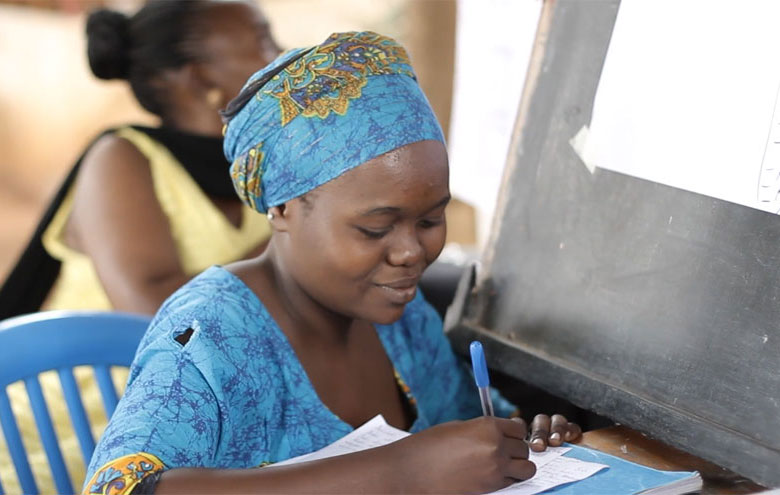 Photo above: Tanzanian participant in The Hidden Dimensions of Poverty project.

In this article, Alexie Gasengayire discusses the participation of Tanzanian women in The Hidden Dimensions of Poverty research project. She outlines the project’s efforts to create an environment that would enable women in poverty to speak out. This article is adapted from En Afrique: Femmes et Prise de Parole (In Africa: Women Speaking Out) that first appeared in Revue Quart Monde n° 257.

In Tanzania, a team consisting of male and female Activists, academics, and professionals working with people in poverty led a three year research project examining The Hidden Dimensions of Poverty. The activists included those with a lived experience of poverty. The project had planned to follow ATD Fourth World’s Merging Knowledge process that was used in the other countries involved in the project. The process organises participants into peer groups with a mix of men and women. However, due to cultural conditions in Tanzania, a decision was made to organise peer groups by gender.

Before organizing the peer groups, the ATD team had visited all research participants in order to record their life stories and professional experiences. Our visits to some of the women activists led us to rethink this aspect of standard procedure, due to the lack of privacy in the women’s home environments.

Our first interview with one of the female activists provides a perfect example of this issue. The woman, who lived outside Dar-Es-Salaam, immediately made us feel welcome and invited us to sit in the courtyard to chat. However, the courtyard was shared by several families. No sooner had we started to talk than a neighbour came and began to cook near us. This meant we were unable to continue our dialogue in private. Since the activist lived in a shared apartment, there was no other place to continue the interview and so we had to leave. Our second and third visits to this activist were similarly unsuccessful due to the presence of the husband, children, or neighbours. This was a problem that we encountered with other female activists who lived in similar circumstances.

As we had not been able to conduct successful individual interviews with all the female activists, we decided to organise a preliminary women-only focus group before starting the second, Merging Knowledge, phase of the project. This focus group was a rich, comradely experience for everyone, and each participant opened up without difficulty. The women raised very personal and sometimes difficult issues that required a lot of trust. In a mixed environment, they would not have felt able to talk about these things.

Conditions that enable women to speak out

The situations described above enabled us to understand the conditions needed to create an environment where women could express themselves freely. We saw that it was not possible to meet activists in their homes. In addition, the women’s free expression was likely to be curtailed in mixed peer groups. For this reason we decided to organise discussion in peer groups by gender.

We also decided to extend Phase Two of the project from two to three days. The first day could then be devoted to collecting life experiences, replacing the previous strategy of home visits. Participants agreed to this new arrangement. As a result, when all the participants finally gathered for Phase Two of the project, the women were confident and cooperative in their peer groups.

This confirmed our decision to organise the peer groups by gender, but it was disappointing to see the extent to which the women’s confidence evaporated in a mixed setting.

The presence of men can silence women

In Tanzania public speaking is a great challenge for women. In the presence of men, women are reserved and silent. This comes from a strong patriarchal culture that puts men at the centre of family and community. The influence of traditional Islam is also very powerful in parts of Tanzania. The man is the spokesperson for the family with women in the shadows.

A participant from the peer group of professionals explained the situation like this:

Before they dare express themselves in public, women must break down these barriers and value judgements. During one of the peer group sessions, a woman from a rural village told us:

Having the confidence to make a heartfelt disclosure such as this is only possible in the right conditions. In one of our Merging Knowledge sessions, women from a village did not risk sharing something they had discussed beforehand in a women’s peer group because of the presence of a man from the same village. They feared that disclosing it would backfire on them once they returned home.

Across Africa, a struggle for equal rights

However, it is not only women in Tanzania who face challenges about speaking out. Elsewhere in Africa women are in similar situations. In Senegal, for example, men enjoy a similar level of recognition and respect that places them in a privileged position over women in family and community life. This seems so normal that, according to a friend’s experience, “Even if a man and a woman share the same responsibilities, people tend to talk more to the man than to the woman”. This is simply a cultural norm.

However, it must be stressed that conformity to these cultural values does go hand in hand with the woman’s level of education. The more education that women receive, the more responsibilities they are able to shoulder, the more confidence they gain and the more able they are to express themselves freely. They can then become agents of significant change at individual, family, and community levels. This is a struggle for equal rights on a wider scale.

Although there is still a long way to go for some countries in Africa, there are an increasing number of pro-women initiatives and organisations campaigning for a change in attitudes. Rwanda is a case in point. For some years now, women have been encouraged to participate actively in the country’s social and political life. They are represented in administrative bodies in a remarkable way. For example, in parliament women account for 61% of members. This is the result of a sustained mobilisation and willingness of women and others to bring about a social transformation.

Video on conducting Hidden Dimensions of Poverty research in Tanzania.