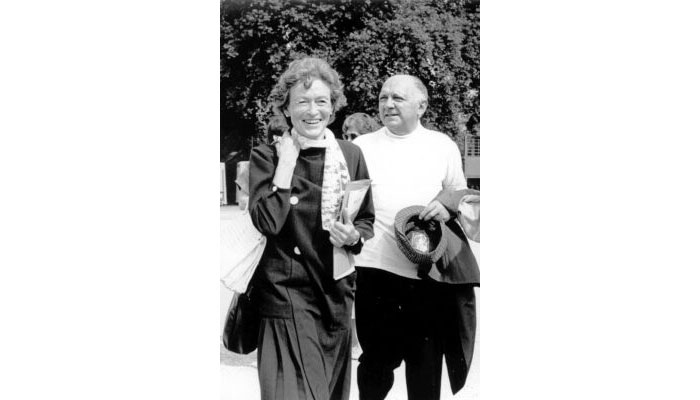 In 2021 Alwine de Vos van Steenwijk would have been 100 years old. In the 1950s, she was posted to Paris as a Dutch diplomat. There, she learned about a homeless camp just outside the city and went to see it for herself. In the camp, she met Joseph Wresinski, a meeting that would change her life. Eventually, she gave up her diplomatic career to help Wresinski. At his request she became involved in research to increase awareness and recognition of poverty. Between 1974 and 2002, she served as president of ATD Fourth World International. During this time, she helped Wresinski and people in poverty speak out and gain the attention of the highest international bodies.

After Wresinski’s death, she  continued her work with ATD Fourth World. Alwine de Vos van Steenwijk died in January 2012 in the Netherlands.

In his book The Poor Are the Church, Joseph Wresinski recalls his first meeting with Alwine de Vos van Steenwijk .

“When Alwine de Vos van Steenwijk arrived, on a wintry first of January, I asked her to sort out clothes. But then, when she asked me, “What shall I do now?” I told her to go and study.  She was taken aback.

“Alwine remained pensive for a while, especially because, as she was a diplomat, I had asked her to go and study what was happening in other countries. The following day, because she was Dutch herself, I asked for her help in receiving a Dutch journalist. Then she understood that, in order to explain things to other people and to persuade them, she had to be knowledgeable herself.  This was how the Research Institute started, the first one to be started by a French association fighting extreme poverty.

“The Institute was gradually built up, not without hardships and tears, and amid general misunderstanding.  Alwine had a letterhead printed as “Social Research Bureau”. She then started to do what her profession had taught her; that is, set up public relations, become known at UNESCO, and organize a study tour of the Netherlands, followed by an international symposium.  We had to provide accommodation for the experts she invited to the camp at Noisy.  Sessions of the working groups were held in a shack where we had to sit on piles of mattresses.”

Alwine de Vos van Steenwijk wrote many books and published numerous articles. Her first book, The Sub-proletarian Provocation, published in 1972, had a considerable impact. Here is an extract.

Learning from the most deprived citizens

“There is of course a simpler reason for accepting the most deprived citizens as brothers and teachers. It is too simple for some, because there is nothing revolutionary about it and it does not involve any spectacular project at the outset. Yet it seems to us to be the truest, the most immediate, the most humane of reasons.

“The most reliable campaigners we have met in the fight for a new egalitarian society are those who went to the grey areas, simply because they recognised unspeakable suffering there and found it unacceptable.

“They went there on the spur of the moment, often with no clear strategy and not knowing whether they would make a difference, simply because they found a people so wretched who at least would no longer be alone in their misfortune. They had too much respect for them to drop into their lives out of the blue: their first wish was to understand and become their allies. Little by little the alliance gave rise to understanding, then to short and medium-term projects, and finally to the blueprint for civilisation. As people of their time, they also had the desire to organise themselves, to improve, to learn new trades, to develop a set of principles, to work out how to measure their effects, to use computers for this purpose, in short, to be effective.

“All this came about as a matter of course, but also because from the beginning, there was a genuine desire to walk alongside people and really listen to them.

“The poor are, it seems to me, good teachers. We owe them everything we have tried to set down in this book. If this record leaves so much to be desired, it is because, on this point, our teachers could not help us. They will say it infinitely better for themselves when we have finally given them the means required and equal opportunities to enter University”.