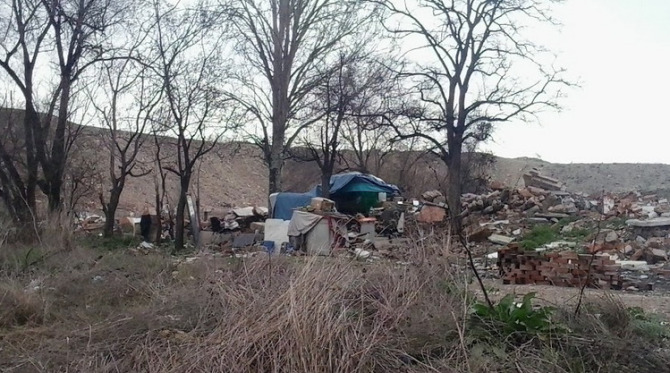 For many people all over the world human rights effectively exist only on paper.

In Spain, for example, people who have been out of work for a long time are eligible to receive an “Active Insertion Benefit”. With a value of around 400 € ($440), the benefit provides about half the poverty line in Spain.  Recipients can receive it for only 11 months in a row and there is a lifetime limit of three years.

On paper, citizens in Spain have a right to this benefit. However, it took Javier and Jaime two years to complete the incredibly complex application process.

Javier and Jaime are brothers. Born in Madrid, they have lived in persistent poverty for more than 14 years.  Using tarps, a tent, and whatever else they could find, they had built themselves a home almost six kilometres from any public services. There was no running water, electricity or heating, and no access to mail services.

Outside Madrid, Javier and Jaime lived just along a path to a garbage dump. There they could scrape together enough money to live by collecting and reselling things other people threw away. Adding to the physical suffering of being essentially homeless was the social isolation they experienced. Taken together, their living conditions meant exclusion from any community life.  A benefit designed to connect people to the workforce was something they could definitely use.

Unfortunately, the application for “Insertion Benefits” was not designed with people like Javier and Jaime in mind. The process assumed that applicants could receive mail on a regular basis, had a telephone, and could easily visit many administrative offices to file papers.

Javier and Jaime were required to have a national ID card, something they hadn’t had for several decades.  In addition, they had to register at the Employment Office to show they were looking for work. Then they had to get themselves on the electoral register. And, in an odd requirement for people with no money, they had to open a savings account at a bank.

For all these official procedures, Javier and Jaime needed to document where they lived. People who don’t have a home with an official address must ask the police to verify their location. One day, the police visited to document Javier’s address. Five months later, they returned to verify Jaime’s address. The five months difference meant they could not prove that they had lived together for six months, a necessary step in the process.

Javier and Jaime are very clever people.  Despite their incomplete education, they have a long history of managing in precarious jobs. Since they were children they have done work such as recovering scrap metal, pallets, clothes, and food.  They have also done an endless number of odd jobs without a contract, work for which employers underpaid them or sometimes did not pay them at all. These meagre jobs were essential to their survival. However, they had to hide the tiny amounts of money they managed to scrape together each day for fear of having that income deducted from the final benefit they would receive.

On one occasion they had only been on the electoral register for five months instead of six when they submitted the required documents.

The administration wrote to tell them about this problem – nine months after receiving their application.

Even though ATD Fourth World gave the brothers a lot of help with each bureaucratic step, the entire application took more than two years. At no point did the administration take into account Javier and Jaime’s long experience of daily suffering or the urgent nature of their situation.

Last December, after years of rejections, Javier and Jaime finally managed to receive their first “Insertion Benefit” of 14 Euros/day (approximately $435 per month).  This amount is far less than the minimum wage recommended by the European Social Charter. It will hardly cover rent in even a very cheap apartment. For that, the government expects Javier and Jaime to find a job, something that will be difficult when they are, essentially, still homeless.

On the day they received their first benefit payment, Javier and Jaime experienced a huge blow to their hopes for a better future. The government plans to demolish the self-built home they have lived in for so many years.  Recently, Madrid has decided to create a green “belt” around the city, removing the rubbish tip (dump) that provided Javier and Jaime’s livelihood.

Many other applicants simply give up on ever receiving this benefit, which the government calls a “right” for those living in poverty.  People often talk about international development programs not responding to the needs of the people they were designed for.

Yet even in “developed” countries like Spain, government assistance programs do not take into account the reality of what people living in poverty experience on a daily basis.

The complicated application process effectively shuts out many people the government says it wants to help.  To add insult to injury, people often accuse those living in poverty of not wanting help or being too lazy to apply for benefits.

Javier and Jaime, however, worked tremendously hard to obtain their meager benefit. Their determination represents the hopes of so many people in extreme poverty to live with dignity. Sadly, their resilience and strength is often invisible to others.

For more information on ATD in Spain