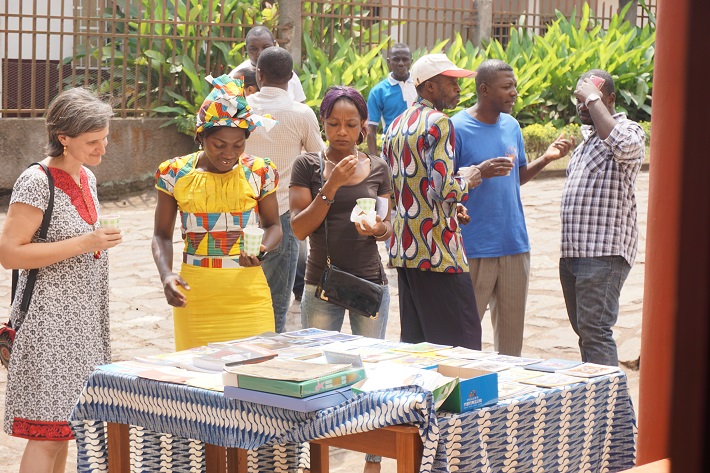 “Activism can happen anywhere in ways we never planned, depending on whom we run into and what is going on in our own personal lives.”

One of ATD’s newest teams is a group called “Friends of ATD Fourth World” in Cameroon. Recently, the group celebrated three years of work supporting activism in that country. It was a memorable day for the approximately 50 people who took part in a ceremony to recognize the importance of activism. In the group are people engaged in many different kinds of work aimed at eliminating poverty. Below, Isabelle Ekeme, a member of the group, talks about the ceremony.

“It was a great day for ATD Fourth World Cameroon as we celebrate three years working together as a team. I feel we have achieved three important things during this short time. We have all made a lot of connections and solidified a great group of people. Our group has really grown and we feel much more comfortable working together. Finally, we have achieved one of our first goals: “Becoming a hub of support for people whose activism involves some form of shared experience with people living in poverty, or working with them one-on-one in a variety of ways.”

Speaking at the ceremony were Nadège Onguene, who presented ATD Fourth World, and Chantal Eyango, who talked about the importance of the group in her own life.

“I am speaking here today because of last year’s Activism Day which really changed my perspective and made me start to ask a lot of questions.

I started paying attention to children who were a little out of the ordinary in the Institution where I work. I saw for the first time people I hadn’t really paid attention to in all the 18 years I’ve worked there. I noticed that there were orphans, people living in deep poverty, and people with disabilities.”

Since joining us, Chantal, who is very engaged with visually impaired persons, has been a real pillar of support for our group. As people introduced themselves, we discovered that we shared many of the same values: accepting our differences, believing in human dignity, and avoiding an attitude of contempt or pity towards those we work with.

Philosophy professor Dadjo Emilienne talked about her work with young people suffering from drug addiction, which is currently a significant public health issue in the area. Bidong Patrick of the Edimar Social Centre talked about supporting children and young people living on the street. Anne-Marie Manga, a psychologist with Humanity First Cameroon, talked about her work in HIV prevention and support of HIV-positive people who are often very marginalized.
After some rather heavy and emotional discussions, the mood was lightened with entertainment by a professional comedian named Piko who has supported Friends of ATD Fourth World for a long time.

The event provided an opportunity for networking and information exchange that will be helpful to attendees when they return to their work. Activism can happen anywhere in ways we never planned, depending on whom we run into and what is going on in our own personal lives. Activism can be simply responding to the suffering of someone close to us, or taking the time to listen to someone who wants to talk. We just have to watch out for the opportunities that we run across every day!

The Friends of ATD Fourth World group agreed that there are many ways to follow up on the energy the meeting generated. What’s important is not fearing commitment to a cause, joining together to overcome indifference, and paying attention to the suffering of people around us who are forgotten and ignored.”