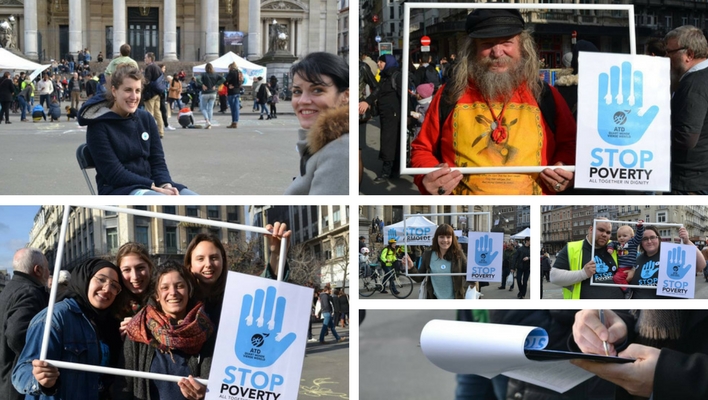 ATD Fourth World Belgium launched its new  #StopPoverty, All Together in Dignity campaign in front of the Stock Exchange building in Brussels on 18 February, 2017. An information stall, a street quiz and musical activities were set up to try and raise awareness with passers-by.

Poverty still persists in Belgium today. Statistics show that 20% of children nationwide (with 40% concentrated in Brussels) live in poverty and face social exclusion which affects the lives of many families. ATD Fourth World held this event to raise awareness with all citizens, including both those who have misconceptions about poverty and those who suffer from it and to remind people that poverty is indeed a violation of human rights.

In this endeavor,  ATD Fourth World invited people who were present on the day to sign the campaign call to action – a call to ensure that no one is left behind. By signing, people showed an individual commitment to a collective message that poverty is not inevitable and that when we act together it is possible to overcome it.

Furthermore, ATD Fourth World is seeking practical measures to be taken in order to reduce poverty in families.

“Those people in a situation of poverty are often considered as people who are either cheating or taking advantage of the system, but we have to make sure their rights are complied with so they can live a decent life”, said  Marijke Decuypere of ATD Fourth World’s Belgian national team.

“Social benefits must be increased, as for many years they have been set below the poverty line. Moreover, there is a severe shortage of affordable social housing, and that is why we are encouraging landlords and others to change this situation”, she added.

Throughout the event, hundreds of people were engaged in discussions with ATD Fourth World members who were present. They were encouraged to sign the call to action, to enjoy a live musical performance by a group of young percussionists, and to take part in various workshops.

The event proved to be a successful launch for a year of advocacy!
Watch the video here:

Come and join us, and keep yourself informed throughout the year.
In the coming months, we will be planning for a significant commemorative gathering on 17th October in Brussels to mark the 30th anniversary of World Day for Overcoming Poverty at which people who struggle with poverty in their daily lives, along with those who support them, will express their resistance to poverty.