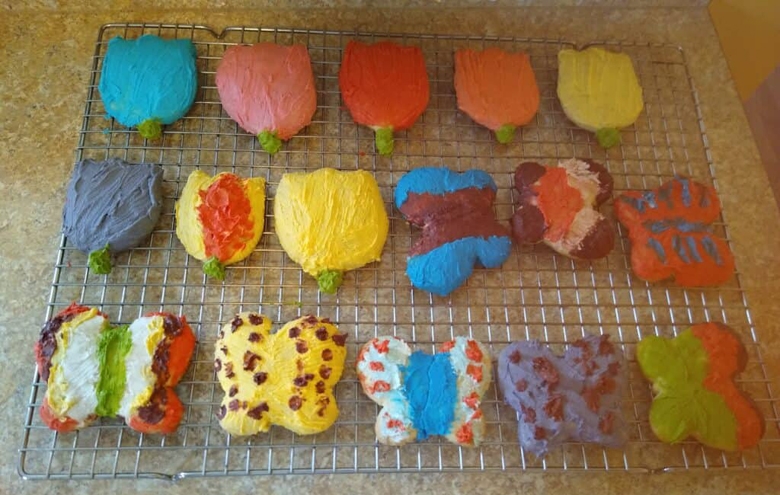 Above: Cookies made by Dierdre Mauss to be shared with her neighbors.

The will of neighbors and family

We are all one family, but sometimes people don’t experience family within their communities or within the greater community of the world. Many people feel isolated and, worse, ostracized. The pain and suffering of aloneness, of being forgotten or pushed aside, is one of the multi-dimensions of poverty, which cannot be addressed by an act of political will. It takes the will of neighbors and family to break through that isolation. I think this is why Mr. Troy of the Seventh Ward in New Orleans always used to address everyone as “family.” It was always, “Hey family.” That was his greeting to everyone.

ATD Fourth World strives to break the isolation of poverty by creating a familial spirit within the communities where we are present.

We can be sister, brother, aunt, cousin, or a friend to everyone we meet, especially with the most isolated. Being present means stopping by to say hello and ask, “How is it going?” Being present means baking cookies and sharing them. Sometimes it means attending a funeral or a wedding. It means having books available for the kids to read and talking with mom and dad.

Being present means talking about big questions together, like the next hurricane, or the elections, or about how to access a service, or simply comparing experiences. Being present means listening quietly while another cries about the injustices they are experiencing. Sometimes it means accompanying someone to an appointment or taking them to a food pantry, or the grocery store, or the furniture store, or the driver’s license bureau. Sometimes it means spending time helping someone move out and look for a new home. Being present means showing someone how to pay a phone bill by phone or how to write a money order. Sometimes it means reminiscing about the old times when we used to go to the park together, to have a good time or to work on a project together. It means building new memories.

Being present also means allowing the neighbors to watch you enter the homes of the people that they fear or have ostracized. Letting them see that you find joy in being connected to people they hold in suspicion. With the hope that they will rethink their opinions and judgments. If it doesn’t change their opinions immediately, perhaps they might at least become less fearful and be willing to reach out later.

There was a young man who used to come to visit me and my husband daily for a meal. Other people used to stop by and warn us that he could turn on us at any moment. People we didn’t know stopped and warned us. One evening about a half hour after he left our home, a light was shining in our window. It was the police. They were arresting him for looking into our window. I tried to tell the police that he was a friend and harmless, but they arrested him anyway.

Days later a neighbor told me that he had called the police, and he warned me to be careful. After the man came out of jail, he continued to visit us. Finally, one day we saw the neighbor who had called the police working with this young man and taking him on jobs. People began to accept him and to speak well of him.

Being present sometimes gives people courage to believe and to find the strength to try something they hadn’t tried in a while, like gardening. Nothing is promised, but there are glimmers of hope in each life and each community when people take the time to be present to others.

More on ATD Fourth World US’s work can be found on this website.
This article was first published here.