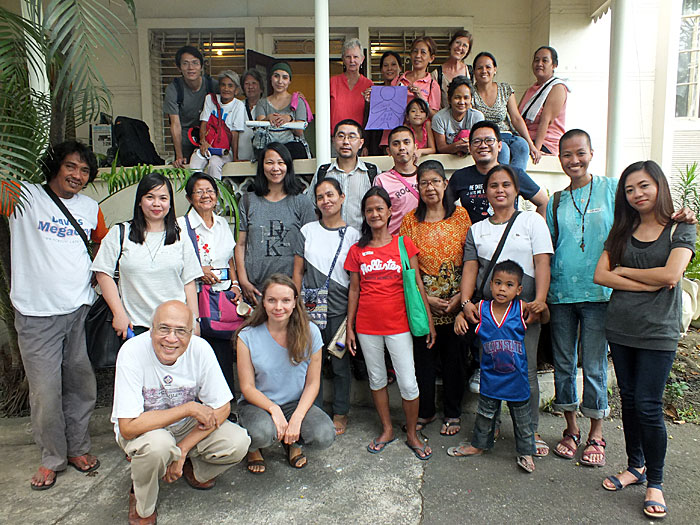 Almost everyone wishes they could do something to make a difference in the world. Concerned about poverty, some people give money or serve food in a soup kitchen. Still, it’s easy to feel helpless about such an enormous problem. ATD Fourth World provides an opportunity for people to do more. An important part of ATD’s work is bringing together ordinary people who want to figure out how to go beyond giving to charity or traditional volunteering. ATD Asian members met in the Philippines recently and drew inspiration from people who struggle every day but still manage to help out their neighbors.

In January ATD Philippines hosted a gathering for people from different Asian countries who wanted to learn more about the organization and meet Filipino members: people who live in poverty, local friends, and ATD Volunteer Corps members working there full time. Among the visitors was Ming Hung from Taiwan, a PhD student at Dong-Hwa University in Hualien. Ming Hung was particularly interested in how people experiencing poverty become responsible for ATD projects like the Street Library and Ang’Galing literacy program.

Two ATD members from Taiwan, A-Yong and Liliana, visited Manila’s North Cemetery where homeless families live, taking care of tombstones and mausoleums that belong to others. ATD has worked there for more than 30 years and currently runs a savings program that allows families to choose an amount they want to save each week and then access the funds whenever they want. People living on very little begin to see that they can save some money. Liliana and A-Yong remarked on the level of trust that existed between these families and ATD. They asked how ATD develops relationships with people in poverty that allow for a genuine exchange of ideas on an equal footing.

Some of the visitors travelled two hours outside the city to resettlement sites where the government had relocated Manila families without permanent housing. ATD visits relocated families several times a year, taking books to read with the children. These relocations are a source of contention for many reasons. There is little work for people outside the city. In fact, a number of families return to their makeshift homes in Manila because they can find work there. At the resettlement site, the ATD team and visitors met with several people who had recently been forced to return to their new homes from Manila.

The out of town guests also attended an ATD regional meeting. Discussions focused on sustaining commitment when working to overcome poverty. Ate* Hilda talked about gaining the confidence to speak out and help others.

“I’ve known ATD since I was a kid,” she said. “But before I didn’t have much courage and I was too shy. When I became older I started to attend ATD’s Forum meetings and learned how to fight for my rights. Now I help in preparing activities for kids in Norzagaray, one of the resettlement areas. When I was asked to facilitate activities for children, it turned out that I am able to encourage them to get involved in activities and parents saw that they can trust me.”

Hoang from Vietnam talked about people she knows who live near a dump site. They feel stronger, she explained, when they are able to tell their story and bear witness to what others suffer. Paul, Liya, and their son, who came from China, were impressed by the involvement of ATD community facilitators who, despite difficult life conditions, are very enthusiastic and ready to help others.

Community facilitator, ate Lilian, described how she got involved in ATD’s educational projects when she saw children struggling to go to school.

“Sometimes I bring kids to school on my own or help them in different projects,” she explained. “By helping kids, I became one of the main community facilitators in Ang’Galing, the tutoring program in North Cemetery. Poverty is not only about lack of money. It’s mainly about lack of access to education.”

Susie, an ATD member from USA, talked about learning to understand more about the feelings of people living in poverty. A mother once showed Susie a pile of old clothes heaped in her back yard.

“I don’t know why people keep giving us so many clothes just because we are poor,” she said. “We don’t know what to do with all these clothes.”

Ate Lydia used the words “bridge of hope” to describe her involvement in efforts to overcome poverty. She has spent most of her life living under a bridge in Manila and earning a living selling bottled water. Despite her difficult life, she still has hope for a better future for her family and other people living in poverty.

The Asian visitors were enthusiastic about discovering new ways to work alongside people in poverty. They returned home eager to stay in touch and to support each other in activities that are both personally meaningful and important for their own communities.

* “Ate” is a term of respect and endearment meaning “sister.”

For information on becoming involved in an ATD project near you.

More information on ATD’s work in the Philippines.