Citizens Organize to Guarantee the Right to a Home 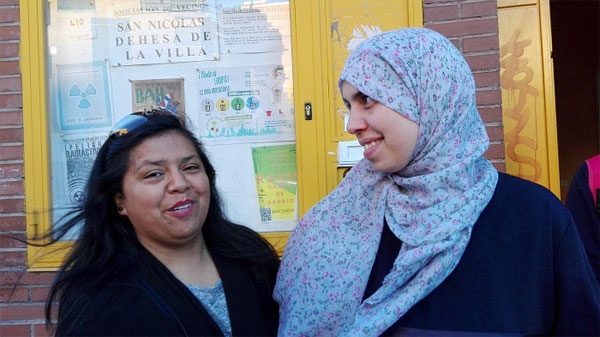 By the Anti-Evictions Group of Tetuan, Spain

The bursting of the real-estate bubble in 2009 created a paradox in Spain: while there was a large number of homes unfinished and unsold (3.5 million empty houses which was more than any other country in Europe), there were also just as many people homeless. Furthermore, the economic crisis, the rise in prices due to speculation, and high rates of unemployment (25% of the active population) have caused many people to lose their homes, unable to pay the rent or mortgage. The houses are in the hands of banks, real-estate agencies, and vulture funds (speculative investment funds that take advantage of a situation to gain economic benefit). The lack of public housing or of houses available for rent prevents many from realizing their right to housing.*

Since the beginning of the crisis, people continuously organized in protest over the lack of housing. Their efforts denounce the absence of public policy initiatives designed to solve the housing problem. There are a number of individuals and organizations fighting against speculation and evictions: squatters, popular associations created in the most affected neighborhoods, and social movements like PAH, a movement for the right to dignified housing. (PAH, for instance, has taken a number of steps to make landlords rent out their empty homes.) Facing thousands of evictions, which we believe are acts of violence against the most vulnerable families, activists search for alternatives to guarantee access to housing for all.

One of these alternatives is the Anti-Evictions Group of Tetuan (a district in Madrid), which meets every Wednesday. During each meeting, every member presents his or her situation and together the group looks for solutions with the assistance of a lawyer and mutual support from other members. When they need to defend a case, they go together because together they are stronger.

Today, they want to denounce the various houses of the Institute of Housing in Madrid (IVIMA) that are left empty in the neighbourhood. The members present their problems. One of them tells us that the IVIMA has offered him public housing, but the location is in another town in the Madrid region, uprooting him from where he currently lives. “They turn into robots”, one neighbour complained. “If you reject the housing, you can’t access public housing for another three years!”

Another woman, whose house belongs to a bank, says, “Now they don’t announce the time and day of an eviction; sometimes we only know the very same morning.”

Suddenly, a man who was recently evicted explains with emotion that his family is living on the street. They still don’t have the money to pay for a hostel. Social services told them that the children would be admitted to a shelter, but the parents don’t want to be separated from them. A neighbour offers to take in his daughter, but she doesn’t have space for the whole family. Finally, the neighbours organized to provide the family an empty house to stay in.

Another woman says that her apartment was expropriated because an urban planning project decided to make a parking lot on their land. They were given money. “They left us in the street and destroyed our home. But they didn’t build anything!” The family has been renting, but at this point they’ve run out of money.

As the day progresses, different people talk about the date of their eviction and wonder what to do. Ask for an official lawyer? Go to the bank and ask for a three-year moratorium?

They know that the last resort will be to try to physically block evictions together, as they have done already in various cases. Yet, this often results in a violent confrontation that everyone wants to avoid, as individuals chain themselves to the house and others sit next to the apartment to prevent the police from entering and forcing the family out.

Even when individuals sign for a house, they might not get access. One person told us that he signed for a house, but that he still has not received the key. “You have to ask them to give you the key before the eviction,” recommends the lawyer.

Yet this group gives the participants hope and a sense of community. Jessica, for instance, has experienced two evictions and has had to live on the street for a time with her two children. She is occupying an IVIMA house and has sent the documents to formalize her situation. However, the IVIMA says that the house has been sold and that they are going to evict her. Because of this, she lives in constant anxiety. “We have to make the media aware of this!” said the other neighbours. Jessica told us, “If I didn’t have this group of neighbours, I wouldn’t have any hope! The mutual support in the group is what helps us.”

Samira, one of the neighbours encouraging the group who has herself lived through similar situations, reminds everyone in the neighbourhood to continue signing the Popular Legislative Initiative (PLI).[1] In Madrid, the PLI Madrid Housing project has been mobilizing all of the neighbourhood associations for a number of months. It proposes a law to guarantee the right to adequate housing in Article 47 of the Constitution. They had to collect 50,000 signatures and present the PLI to the Madrid Assembly on 26 May to apply for and process the law.

Finally, they secured the signatures of 76,733 people who supported a parliamentary debate of the proposed law – many more than what was necessary. The debate is still pending.

Is this finally the long-term solution to make the right to housing a reality? The solution must be a collective political effort, according to the neighbours of Tetuan, who are committed to struggle together everyday. 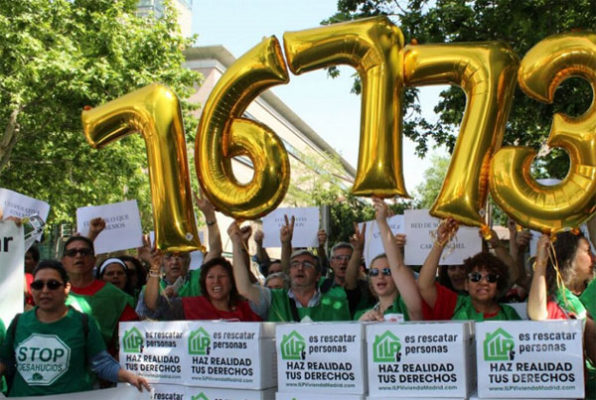 [1] The PLI has several goals: protection against evictions and access to public or social housing, a clear policy of emergency access to people in distress, and the obligation of banks and real estate agencies to offer public housing or rent support in the event of the expulsion of vulnerable people, among others.

*The European Constitution and Social Charter state that citizens should have the right to housing. However individual countries do not always respect these rights.