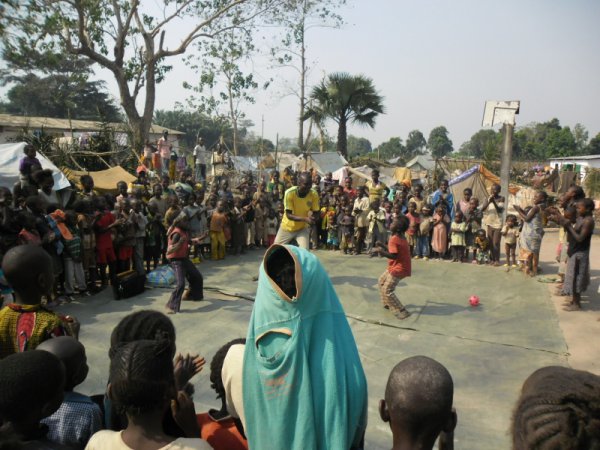 Herbert, a friend of ATD Fourth World in Bangui tells us about his work over the past few months: “In the refugee camp [at the airport], there are a few of us youth who help out. We help to point people in the right direction and to help them get oriented. We support mothers so that they have water; when they have to take medicine, we help them understand how to do it. Seeing us, people say: “But who are you? What organization do you work for? Are you getting paid?” And we say: “No, we’re ATD Fourth World”.

“Mothers participate too, and the way they support us helps other mothers to get involved as well later on. We have a strong base so we can keep going.”

Since Christmas, activities have been taking place next to the airport in the Mukassa neighborhood. UNICEF asked ATD Fourth World to participate in a one-day training for running activities with children; Herbert’s enthusiasm and experience are such that he was the designated trainer or much of that day.

He explained for example that activities must take place where everyone can see what is going on, and that any child who wants to can join in. Herbert also brought books to spark children’s curiosity, and built a Mikado game out of straw to show a simple and educational game that works well with children. And he taught lots of songs too, of course.

Herbert also went to speak with the head of the field-hospital built at the airport by Doctor’s Without Borders (MSF). He wanted to offer the drawings made by the children in street library to decorate the space. The director was delighted: “It’s the first time someone has come to us to suggest something for that space.” At 3 pm, she was there in the middle of all the children, singing with them and dancing. The children were so excited. The next day they went to decorate the hospital together.

Herbert, Firmin, Chancella and others guarantee a time of happiness and joy for hundreds and hundreds of children who smile and laugh for part of the day, (especially with the song: ‘Makoutoudé tou na na na’).

“What we’re doing,” Herbert added, “we have no idea if it will lead to bigger things. But it shows that everyone needs us – everyone needs ATD Fourth World.”

One week later, UNHCR provided three packs of tarps to support the activity!

It’s through the youth and what they give to their community that we see a future for the Central African Republic – and we believe.