Burkina Faso: Eight Proposals for Education for All 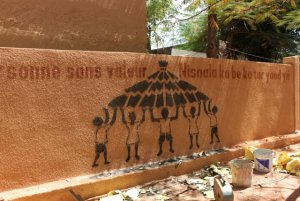 Promoting a quality education for all has been the central focus of ATD Fourth World members in Burkina Faso. In October 2014, after various events at the international level, members brought their message back to the local level, re-iterating the eight proposals put forth by the local Committee of Partners for the Educational Success of All:

We decided to celebrate the World Day for Overcoming Poverty, [October 17, 2014], at ATD Fourth World’s Courtyard of a Hundred Trades in Ouagadougou because that’s where we gather to meet, exchange, and “Think, Decide and Act Together against Poverty.”

Among the 300 attendees, there were the French Ambassador to Burkina-Faso, Mr. Gilles Thibault, the former UN Burkina-Faso Ambassador, Mr. Filippe Savadogo, and a representative of the national Ministry of Education, Emmanuel Kiemtoré. The program included music, giant marionettes, and testimonials.

We read the eight proposals for an education that really includes everyone, which we had drawn up with a committee of partners that included people living in extreme poverty, others in solidarity with them, and stakeholders in political and civic organizations. (See PDF below)

We also created a collective piece, painting a mural in which everyone could participate. It represented a Mossi proverb which says, “Only together can we lift the roof onto the house.” We wrote around it, “Every person is valuable,” in French and the Mossi language of Mooré.

To finish the event, we provided a guided visit of the Courtyard to present what we’ve done together over the past 30 years to ensure that no one was left behind and that everyone could express themselves.”