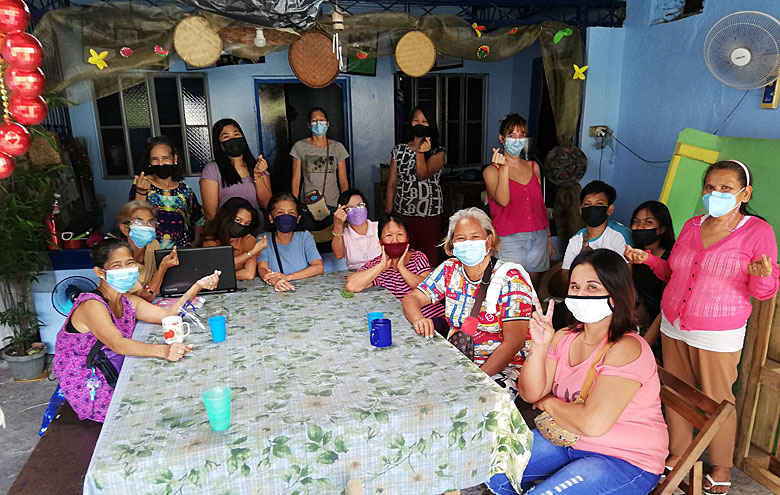 For ATD Fourth World Philippines, Christmas workshops1 are a long standing tradition. As many people can’t afford to buy Christmas decorations, the workshops provide an opportunity to make something that will brighten up their homes and communities.

ATD believes that cultural and artistic expression is an important part of one’s dignity and the struggle against poverty. So the workshops encouraged people to be creative and imaginative, as well as proud of what they created. In this way, the workshops achieve a number of goals: they strengthen ATD’s connection with the community while creating Christmas spirit, joy, and beauty.

Planning starts in November for the December workshops that always end with a joyful party for ATD Philippines team members, friends, and “facilitators” (community activists who live in poverty).

Sixteen community facilitators from Manila were involved in planning, running, and evaluating the Christmas workshops. Two young women from the Manila North Cemetery2 community facilitated for the first time and enjoyed themselves very much. And organizing the workshops together created and strengthened real bonds between facilitators and ATD team members.

Planning started with three days of brainstorming and everyone creating their own Christmas decorations. Via a vote, the group decided which decorations to make, then taught other facilitators how to run the workshops. The three days of practice and preparation were very important. Not being professionals, the facilitators needed time to learn how to run the workshops. Equally important, they also needed time to gain confidence that they would be able to carry out the activities.

In 2020, the team found it difficult to get the workshops going. So for 2021, the team decided to start preparation with activities around “Komunikasyon,” which means communication in Filipino. One of these involved finding words using Komunikasyon letters. For example, for the letter “M,” someone in the group mentioned the word “Magbigayan,” which means “to give way to each other.” Because sometimes there are disagreements while planning the workshops, compromise is important so everyone can express themselves.

In order to help with collaboration and stay focused on planning, the facilitators also decided on some rules and guidelines. Having these helped to create a more peaceful atmosphere and avoid distractions. Even during the workshops themselves, ATD Philippines team members noticed facilitators often reminded one another of the rules.

The 2021 Christmas Workshops produced almost 700 decorations made by more than 450 participants, including some 200 children. Workshops took place in six locations where ATD has run activities in the past and where ATD hopes to continue working in the future. Children were eager to color and make new friends, share things with each other, and talk. They especially enjoyed the workshops as many could not attend school because of Covid. In fact, children in the Philippines were not allowed to go out on the street for almost two years during the pandemic.

Each workshop ended with evaluation questions like: How was the workshop today? What did you enjoy? How did you feel? What do you think could help improve the activity? Regular evaluations like these allow people to gain confidence and better express themselves.

Feedback from the evaluations

“All the workshop are beautiful and I am very happy because we had a lot of people.”

“I was very much impressed by the children who were so eager to learn.”

“I was impressed by that one child. That even if he’s not very capable, he kept trying even when he struggled a lot. So I just assisted him so he can finish. He was very happy.”

“We did not neglect the children, but I hope next time we’ll have more mothers.”

“We should check the feasibility of the workshop before we choose it.”

Food for thought for the future

The ATD team hopes that in the coming year, they will be able to stay in touch with the communities where the workshops took place. In the future, the team’s goals include reaching the most isolated people and inviting new people, including young people, to be facilitators.