Well-being and Dignity for All 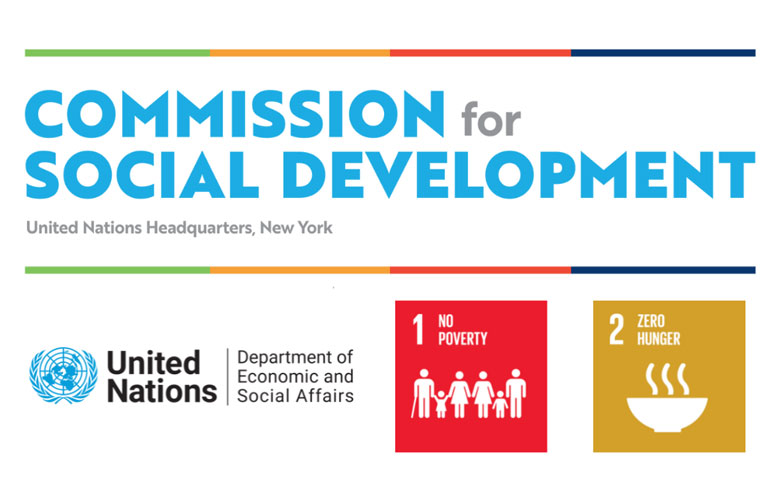 From February 7th to 16th, 2022, the 60th session of the Commission for Social Development (CSocD60) addressed the Priority Theme: ‘’Inclusive and resilient recovery from COVID-19 for sustainable livelihoods, well-being and dignity for all: eradicating poverty and hunger in all its forms and dimensions to achieve the 2030 Agenda.’’

Drawing on its 65 years’ experience learning and working alongside communities experiencing poverty and social exclusion, ATD Fourth World used this theme as the perfect opportunity to emphasize and bring substance to the concept of dignity (present in the Commission’s theme). This word can sometimes be seen and used by policymakers as an abstract concept. Through workshops, webinars, and supporting the advocacy work of the NGO Committee for Social Development, ATD Fourth World strove to build a better understanding of essential concepts such as “well-being,” “dignity for all,” and “eradicating poverty in all its forms and dimensions.” More specificically, ATD Fourth World worked with key partners to bring to the forefront the concept of discrimination and opened spaces for lived experiences of discrimination on the grounds of poverty to be heard and recognized.

The content of this resolution was highly influenced by the UN Secretary-General’s report on the theme of CSocD60, released in preparation of this Commission. During the drafting phase of this report, the NGO Committee for Social Development, using advocacy elements from ATD Fourth World, demanded that further language on dignity be inserted in the report. This push directly resulted in Paragraph 34 of the UNSG Report:

This paragraph 34 represents major progress in the understanding of poverty and how its eradication must rest on an approach based on the dignity and human rights of the person. Even though the paragraph does not go so far as to define what dignity is, it states that dignity implies ‘’civil registration and access to legal identity and non-discrimination on any grounds.’’ The paragraph also posits that dignity ‘’implies the participation and empowerment of the most vulnerable in decisions that directly affect their lives.’’

This perfectly aligns with ATD Fourth World’s vision and values and as such should be positively welcome as it offers a solid basis to continue advocating on these issues. This paragraph 34 and the UN Secretary-General’s report as a whole were used as direct sources and references for the Priority Theme resolution. ATD Fourth World welcomes the resolution and in particular its various references to the commitment to poverty eradication; to the multiple causes of poverty, hunger, and inequality; and to the need for a multidimensional approach in tackling all aspects of poverty (paragraph 26). This same paragraph 26 also mentions “combating all forms of discrimination; empowering all people and facilitating the social inclusion and participation of those who face multiple and intersecting forms of discrimination.” The new language, “multiple and intersecting forms of discrimination,” though criticized by several Member States at the closing session of the Commission, is a victory for the recognition of the multiplicity and intersectionality of discrimination that many of Fourth World activists have highlighted.

The resolution further encouraged Member States to facilitate the meaningful participation and empowerment of those in vulnerable situations, including those living in poverty, in the design, implementation, and monitoring of COVID-19 recovery plans (paragraph 25) – a recommendation and practice at the core of ATD Fourth World’s advocacy at the United Nations. This in part comes from Paragraph 34 of the above mentioned Secretary-General report. We regret that more elements from Paragraph 34 (especially regarding dignity, civil registration, and non-discrimination on any grounds) were not brought into the resolution.

The direct connection made between climate change and the eradication of poverty in paragraph 30 is also a positive development as it explicitly underlined the need to address the economic, social, and environmental impacts of climate change. Additionally, the resolution stressed the need to use “multidimensional analytical tools, including multidimensional poverty indices and risk analysis, to capture the interlinked nature of deprivations and vulnerabilities as well as understand poverty dynamics and shape policy” (preambular section). The multidimensional measurement of poverty is a concrete area of work that ATD Fourth World is focusing on with the Hidden Dimensions of Poverty research.

Finally, the resolution referred multiple times to the promotion and protection of human rights and to the affirmation of the fundamental dignity of the human person (paragraphs 3, 7). The direct reference to the Guiding Principles on extreme poverty and human rights in the preambular part of the resolution is highly appreciated, as ATD Fourth World contributed directly to the drafting and publication of these Guiding Principles.

Taking the floor at the Commission for Social Development

In the afternoon of the same day, Maryann Broxton, Co-Director of the Multidimensional Aspects of Poverty (MAP) Research, ATD Fourth World USA, took part in the high‑level panel discussion on the Priority Theme of the Commission. She examined the meaning of “dignity for all” and explained what development through the “lens of dignity” should look like. She explained that dignity cannot simply be the latest “buzzword” and that it is crucial to work from a more developed concept, including in United Nations documents and resolutions, which starts by following the lead of people on the ground, in the communities most directly impacted by poverty. Her full statement can be watched here.

On Tuesday February 15th, ATD Fourth World representative Aria Ribieras was able to deliver an Oral Statement at the virtual Plenary Session of the Commission.

This was an opportunity to recall that, for people in poverty, the meaning of the word “dignity” is clear. The dignity of a human being is built through self-esteem and the recognition granted by other individuals and societal institutions. It belongs to everyone, and is at the core of building healthy communities and societies. The following recommendations were then shared:

In the context of a global pandemic where pre-existing injustices and discrimination have been exacerbated and sufferings linked to poverty and hunger have dramatically increased, it is crucial that Member States recommit to eradicating poverty in all its forms and dimensions everywhere and, more importantly, that concrete actions follow these commitments. This year’s Priority Theme allowed ATD Fourth World to share its understanding of the concept of dignity. The resolution coming out of this Commission contains promising language around ending discrimination and promoting human rights and participation, elements that we will always continue advocating for. And to do this, we will continue to create spaces highlighting the voices, recommendations, and experiences of those who face the injustices of poverty and discrimination on a daily basis.

Click here to read about the virtual events organized by ATD Fourth World during this Commission for Social Development 2022.