Skip to content
Home > Indian Ocean > Madagascar > “I, Too, Am A Citizen”: The Fourth World People’s University in Madagascar

“I, Too, Am A Citizen”: The Fourth World People’s University in Madagascar 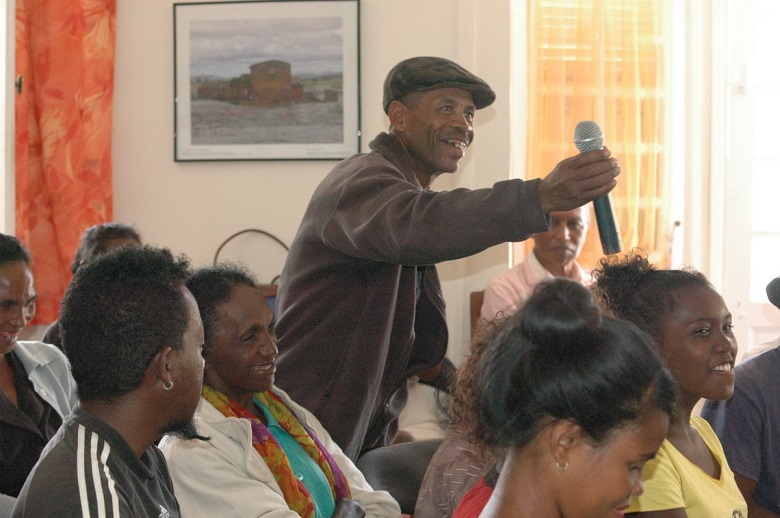 ATD Fourth World has been involved in running a People’s University in Madagascar for the past two years. A project conducted in many countries, the People’s University usually involves a series of meetings where people from different social backgrounds can talk together in an atmosphere of equality and respect about a particular issue.

The most recent People’s University in Madagascar was held in Faravohitra, a neighbourhood in the heart of Madagascar’s capital, Antananarivo. It was open to a number of organizations and citizens, and provided an opportunity for ATD Fourth World to work with the Arrupe Social Center (Pastorale de la Santé et de la Famille). Their collaboration is based on a shared vision of creating a society that is more just and enables everyone to live decently by working hand-in-hand with society’s poorest members.

Several participants took the floor to explain the problems they encountered when trying to get an identity card, take part in elections, and participate in neighbourhood affairs. Some of them raised the problem of birth certificates. Many women have to give birth at home with the help of a midwife. This can be for financial reasons, but also because they are afraid or ashamed to go to a maternity centre. Sometimes women have to walk several hours or even a full day to get to a maternity centre. Some women have been trained to help with these situations, but there are still too few of them because this work is not easy.

The result is that many people grow up without a birth certificate. Later they cannot obtain an identity card because their birth was never declared at city hall.

When people don’t have a birth certificate, they meet with considerable obstacles that deprive them of numerous fundamental rights. In the eyes of some, they have no value. The police can arrest them at any time. They ignored because there is no trace of their existence, either in life or in death. When they die, their families encounter major difficulties because the permit to bury or transfer the body is granted only with papers that prove the person existed. If they die at the hospital, the hospital directors must be bribed to get the body out of the morgue. During their lifetime, they cannot fully participate in neighbourhood affairs if they don’t have a national identity card. The name recorded in the neighbourhood registry must be copied from an identity card. So officials cannot record a person’s participation in elections or community responsibilities like street cleaning, water pump maintenance, formal condolence visits, etc. If you do not take part in neighbourhood affairs, the office of the manager of local governments does not have you in its records. To be a citizen you first have to exist on paper. The guest speaker Ms. Sahondra Rabenarivoson, a business lawyer and member of SeFaFi (a group that works to defend democracy and human rights by identifying societal problems and notifying the people in charge), listened attentively to all the speakers. She then stated that she had “learned a lot from the very poor families of Antananarivo.” She explained the Malagasy laws and parts of Madagascar’s constitution related to human rights. She also emphasized  the duty all citizens have to never accept the denial of their rights, to speak out against all forms of injustice, and to call out people who do not fulfill their responsibilities.

After the session, several participants stated that this was the first time they had ever heard the contents of Madagascar’s constitution.

Families don’t hesitate to set aside their daily “breadwinning activity” to participate in a People’s University because many say there are benefits to taking part: the ability to share, to listen and be listened to, to learn, and to get some relief from the daily grind. Another People’s University was in the works for later in the year but did not take place because of the country’s public health emergency. However, these families in Madagascar were eager to think about what they could do together to beautify their neighbourhood and keep it clean. The next People’s University will address the question: “How We Can Take Care of Our Shared Spaces and Resources?”