Community Librarians in the Neighborhood 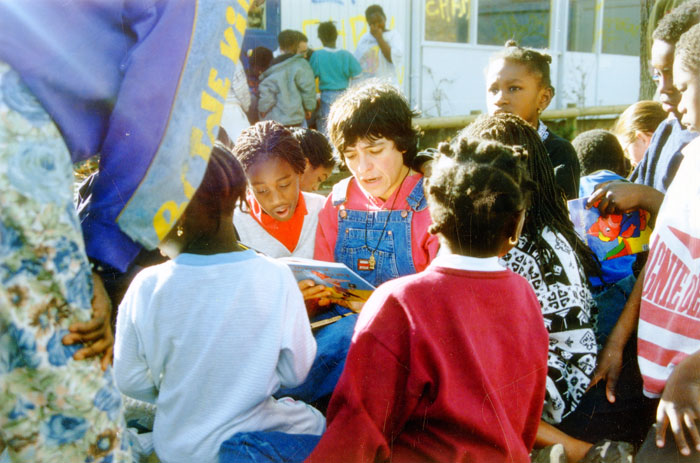 Young people from disadvantaged neighborhoods receive professional training as “Community Librarians” to bring library books “outside the walls” and the joy of reading to others.

Since 1968, across France and around the world, young people have brought books into disadvantaged neighborhoods. Joseph Wresinski launched this initiative during that time of upheaval, calling on striking students to bring books into the most under resourced neighborhoods.

Over the years, these “Street Libraries” have been a simple and concrete way for young people of all social classes to express their support for these neighborhoods’ children and families.

As the street libraries evolved, different people have taken on the role of organizers. Often these were young people who lived in the neighborhoods, the big brothers and big sisters of children who participated. Their initial curiosity often led to increased interest and a leadership role in organizing the activities themselves.

Being committed to the young people of the Fourth World myself, I was witness to their involvement with the children of their neighborhood and their desire to do something to liberate these children.

Who knows these children better than the young people who live in the same neighborhood? Who can better communicate with them, use language that the children understand, and make themselves understood? Who can feel more strongly the suffering, deprivation, and discrimination; but also the dreams, the strength, and the struggles of these families? Who could be a better mediator between the knowledge of their world and the more structured, more academic knowledge illustrated by books?

So it was in 1988 that a first meeting took place between the French Ministry of Culture’s publishing department and ATD Fourth World. The goal was to create a project to give these young “activists” from disadvantaged neighborhoods professional training in a new occupation: that of community librarians, working to build connections between libraries and the people in poverty who all too often would not dare set foot in them.

As I was close to these young activists whom I worked with in their project of social and professional integration, I was asked to be the point person for the pilot project.

So from 1992 to 1994, I was the coordinator for ATD Fourth World of the first cohort of community librarians. A training institute for social workers and the association in charge of training librarians, supported by the Ministry of Culture, designed a training program. Twelve young people from the network of ATD Fourth World’s street libraries were selected for this experimental training. Two young people from an association of the city of Amiens joined them.

The selection criteria were: having a good understanding of the context of extreme poverty and/or having come from a similar background, having led cultural programs as a volunteer, experience in leading street libraries, and not having a bachelors degree.

The pilot project involved a number of area partners in the definition and the implementation of the community librarians in the neighborhoods. These included the Ministry of Culture, the cities (Grenoble, Caen, Rennes, Bezons, Vaulx-en-Velin, Lille, Ermont, Saint-Quentin, Marseille, Bordeaux and Amiens) and their libraries, local associations, and the outreach workers themselves who invested wholeheartedly to develop this new profession and bring libraries “outside the walls” in order to reach the target audience of non-readers.

Twelve out of 14 young people obtained their training accreditation as community librarians and earned diplomas as assistant librarians. With the aid of the Ministry of Culture, they were employed in a library at the end of their training. Other library outreach trainings took place subsequently with a certificate granted from the State as a Specialized Organizer of Popular Education.

The start of the 1995 youth employment plan gave city halls the necessary financial help to hire new employees, without defining in advance the precise tasks to be done by the newly recruited community librarians.

It remains a challenge to go into the neighborhoods to work with children who don’t read. Nevertheless, many of the libraries undertake some manner of engaging the most isolated communities: activities with books in these neighborhoods, bookmobiles, book trucks, storytelling in the street, public spaces or the presence of community librarians with a story of poverty…..a path to be continued!