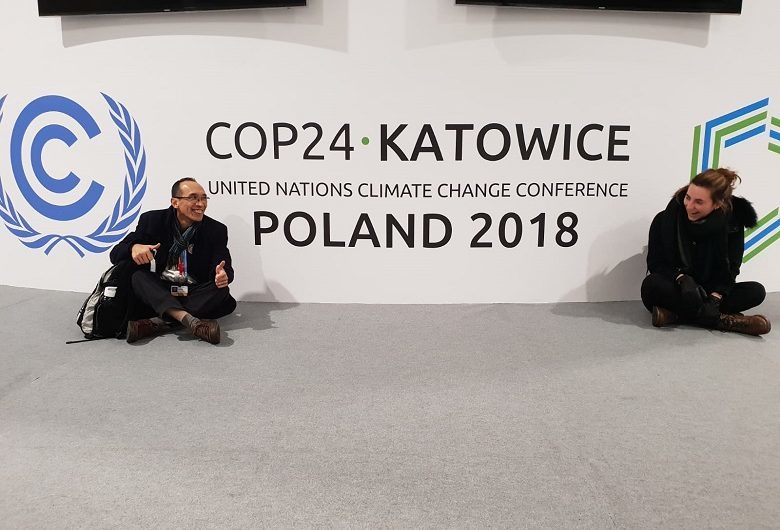 One more day wasn’t enough to get an ambitious document signed by the countries assembled in Katowice, Poland for the 24th Conference of the Parties to the United Nations Framework Convention on Climate Change (COP24).

COP24 had three objectives: first, assess for the first time the level of engagement by the countries to tackle climate change; second, agree on common guidelines for the implementation of the Paris Agreement; and third, increase the ambition to effectively limit global warming to 2º C, or even 1.5º C, by the end of the century.

Four members of ATD Fourth World attended COP24 as negotiations observers. For the past three years, ATD has been part of the “Human Rights and Climate Change” working group, which connects 30 organizations from different countries. The group makes the case for human rights to be at the core of the Implementation Guidelines and, consequently, in climate action policies and programs set up nationally.

A Reluctance to Accept the Scientific Facts

COP24 took place exactly two months after the Intergovernmental Panel on Climate Change (IPCC) released its latest report. This group of scientists showed the consequences of a more than 1.5º C temperature increase: heat waves, species extinction, rising seas, islands completely submerged, etc. All of these phenomena will intensify, the report stated, if the world does not reduce CO2 emissions more rapidly over the next 12 years.

The draft Rulebook for the implementation of the Paris Agreement provided for an “acknowledgement of this report” but four countries (Saudi Arabia, Kuwait, Russia, and the United States) insisted on changing the language to “take note”. The final text limited itself to asking for recognition of the IPCC’s role in providing scientific information to enhance the global response to climate threat. The scientific facts have clashed head-on with the geopolitics of States. It is difficult for certain countries to accept these facts when they appear to threaten the country’s economic interests. The countries eventually reached a consensus around a set of minimal commitments. It makes no mention of the goal of limiting global warming to an increase of 2º C, let alone 1.5º C, between now and 2100, a limit necessary to avoid catastrophic scenarios.

Everyone talks about this but the concept means different things to different people. According to the International Trade Union Confederation, a just transition requires a labour relations dialogue between workers, employers, communities, and governments. A just transition puts emphasis on creating jobs and generating livelihoods, so that no one is left behind in the race to reduce emissions. This issue had even more resonance at COP24 as it was held in Katowice, the centre of the Polish coal industry. There is considerable anxiety in the area about what an ecological transition would mean for the workers involved.

However, most people living in extreme poverty are unemployed or have only precarious jobs in the informal sector. Thus, ATD makes the case for a broader vision of a just transition. Several conferences and COP24 side-events were organized around the theme of a just transition. The first question was often: fair for whom?

This was an opportunity for ATD to emphasize that a just transition must not leave behind people living in extreme poverty whose informal work is not always recognized by much of society. Human Rights out the Window

ATD has insisted for many years that all people must have access to fundamental human rights. It was therefore upsetting to see that in the final hours of COP24, the countries in attendance chose not to make specific mention of human rights in the implementation rules. It is disappointing that the much-awaited Implementation Rulebook of the Paris Agreement is less ambitious than the agreement itself, which includes human rights in its preamble.

The consequences of this decision could be disastrous for citizens of all countries, and especially for people living in extreme poverty. They are and will continue to be the first people impacted by climate change. It is urgent to take action for the future of our planet; however, it is equally imperative that responses to global warming are not detrimental to the people who live in precarious conditions around the world.

In France, ATD Fourth World has launched an “ecology and extreme poverty” initiative in order to consider these issues from the point of view of the most marginalized people. For more information, you can write to .