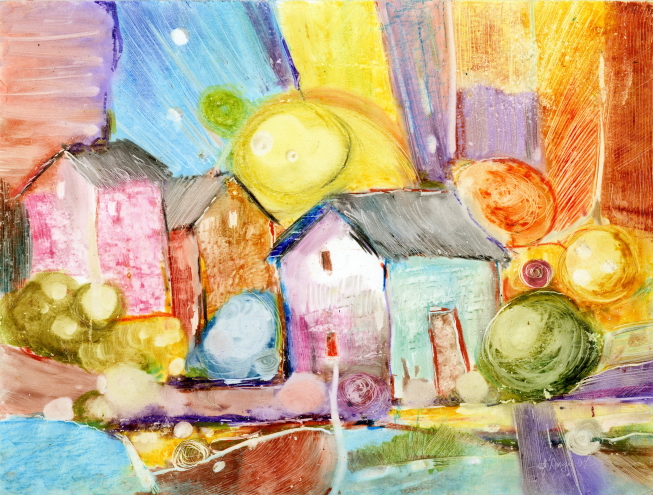 By Bruno Dulac, ATD Fourth World Volunteer Corps. His account of living during lockdown in Madagascar.

Measures to protect the island came in early. The closure of the airport, schools, and the prohibition of gatherings were announced on March 20; the lockdown of the Analamanga region1 and of the city of Toamasina2 on March 23; public transport and taxis were banned on the same date.  Since then, new measures are announced daily such as not going out after noon and curfew from 8 pm to 5 am. Only food shops can open in the morning. No more than two people per car, with the passenger in the back seat. Only one person per motorcycle. Lots of military and police on the streets, roadblocks to enter and exit the city.

We had to rethink the organisation of our (ATD Fourth World) work. We suspended all our group activities (Street Libraries, Tapori, People’s Universities, MMM workshop, etc.). We are concentrating our work on two objectives.

The first objective is to make sure that the families we work with do not starve to death.

Families who earn enough money every day to eat in the evening from that day’s work are now deprived of their income, partially or totally as the case may be, and need support. This isn’t our goal, as it does not allow us to advance towards the empowerment we are seeking, but we are in an emergency.

The second objective is to help families understand and apply the instructions given by the health authorities. Quarantine is impossible in certain neighbourhoods due to cramped housing, non-existent private outdoor spaces, and tiny public spaces.

As for social distancing, we are organising small individual awareness workshops in the neighbourhoods, one family at a time. We are going to produce cloth masks with the help of MMM craftswomen living where we work.

In some neighbourhoods, many families are suddenly destitute and do not even have enough money to buy subsidised rice. They fear further quarantine.

Our production of masks started well in Antohomadinika4 and will soon start in Andramiarana5. Many people in Andramiarana continue to make carpets by weaving strips cut from scraps of fabric retrieved from the garbage dump. The result is very pretty and cheerful. Their buyers are middlemen who sell to retailers in the markets. These middlemen have now disappeared. We have appealed to our donors to buy these carpets in the coming weeks so that these families can continue to live off the fruits of their labour.

In his address on Sunday, President Rajoelina announced the extension of the lockdown for another two weeks. From 5 a.m. to noon, the streets are crowded, and then from noon on, empty, the city is dead. All this apparent morning activity does not, however, allow the informal sector to continue to function. Two interesting measures have emerged this week.

To date, there have been no deaths and 93 reported COVID-19 cases. One would hope that Madagascar will make it through… but with 150 tests officially announced a day, where are we really?

The situation in precarious neighbourhoods remains very difficult. In the area of the city centre where we work, men are often dockers, masons, water carriers, coffee sellers in the street, and repairmen. Women are laundresses, broom sellers, vegetable sellers; some make doughnuts and soup. In the part of town where there are many rice fields, men and women make carpets, retrieve objects on the garbage dump, garden, and fish small crayfish and fish in the rice field. Today, all these activities have slowed down or totally stopped.

Emergency aid and sales at subsidised prices are first set up in the capital and will then spread to the outskirts. Our friends in the rice fields are therefore in great difficulty. This is why, yesterday, given the urgency of the situation, and contrary to our practices, we organised a distribution of 2.5 tonnes (metric tons) of rice to make it through Easter and to last until the implementation of a tsena mora8, in principle next week.

The health emergency was extended yesterday by two weeks. In Antohomadinika, in the city centre, we continue to visit people and to provide food support to those who really don’t have anything left – cash transfers not being functional yet. In addition, we carry on with the production of masks in the library, with two MMM craftswomen who live in the neighbourhood. We maintain the workshops to raise awareness of social distancing and welcome one family at a time. Our projects are still suspended, but we have resumed some Tapori activities with a maximum of five children at a time. They have written and illustrated messages for other Tapori groups around the world.

In Andramiarana, in the rice fields, public aid is even slower to arrive. We have started buying carpets from the 120 families for whom this work represents one of the only income generating activities. The neighbourhood groups that have just been created are involved in our discussion to determine which families are currently in a situation of great vulnerability. As of next Monday, we will open a new mask production workshop for four MMM craftswomen. This is a way of providing both work to these craftswomen and their families and, of course, masks to the inhabitants.

The epidemic did not break out in Madagascar. Although the number of confirmed cases has increased in recent days, it now stands at a total of 149 cases, with no deaths. Partial re-opening decided two weeks ago, will continue, President Rajoelina announced last night. It concerns the three regions still affected, including the capital.

Ending lockdown has allowed a resumption of informal activity and the inhabitants of precarious neighbourhoods have been able to reclaim some sources of income.

The cash transfer will reach 300,000 households and is being implemented gradually. The families concerned will receive two allowances, the first now and the second in June, each equivalent to less than a month’s income for a worker in poverty.