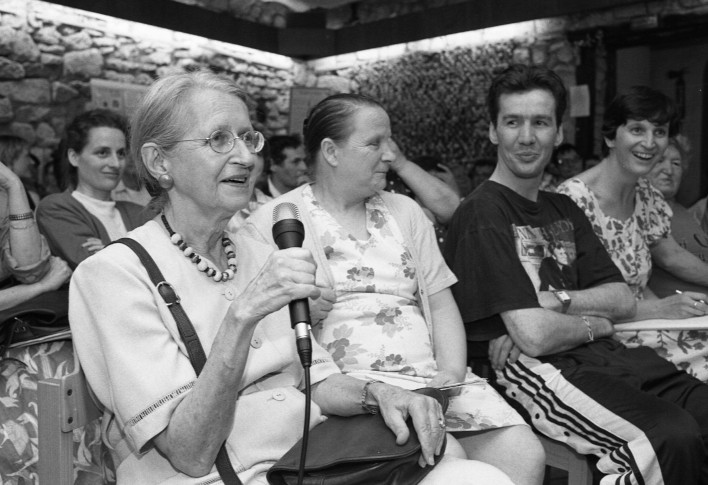 On October 25th, 2020 Geneviève de Gaulle Anthonioz would have been 100 years old.

During this year’s International Archives Week, ATD will begin a project to make public its archives about this woman, now famous for her work to resist the Nazi occupation of France during World War II. After spending time in a German concentration camp, Geneviève de Gaulle returned to her country and became one of the first ATD Fourth World Allies. She later served as the President of ATD France from 1964 until 1998 when she was succeeded by Paul Bouchet.1 De Gaulle also served as President of the ATD Fourth World Foundation from 1971 until her death in February 2002.

Many people in France and around the world have now heard of Geneviève de Gaulle following her 2015 induction into the French Pantheon for her activism resisting the Nazis. In 2017, a major biography in English, The General’s Niece, was published in the United States. Two autobiographies, Le secret de l’espérance (The Secret of Hope) 2 and Traversée de la nuit (Crossing the Night) 3 have been translated into Chinese.

But what is less well known about Geneviève de Gaulle is that after World War II she devoted decades of her life to learning from people living in deepest poverty and advocating alongside them.

Convinced that others needed to recognize their unique understanding of life, even consider it a valuable topic for research, de Gaulle devoted much of her life to ensuring that people who endure extreme poverty could contribute to improving our world.

The archives that we are publishing today and every month until 25 October 2020 illustrate how Geneviève de Gaulle firmly believed that people who have been crushed by poverty possess an important form of knowledge – and that this knowledge is extremely valuable. She also believed that the understanding of people who have suffered deeply can help to make the world a more human place.

De Gaulle lived out these beliefs through her strong bond with residents of the Noisy-le-Grand emergency housing camp (where ATD started in France) and her regular attendance at sessions of ATD’s Fourth World People’s University. When de Gaulle backed the 1998 French orientation law to fight exclusion, her advocacy was always based on concrete experiences of people with lived experience of extreme poverty, as well as years of listening to their observations and reflections.

People who live in the deepest poverty often hide their experiences and knowledge behind a thick silence. As is so often true of violence, others don’t want to hear about it. Geneviève de Gaulle knew this silence all too well.  Perhaps this was where she connected deeply with Fourth World Activists, and where they instinctively recognised themselves in her. It is so hard to talk about your own humiliation, or how it feels when your suffering is ignored.

It was towards the end of her life that de Gaulle finally managed to write about her experience of the camps in La traversée de la nuit (Crossing the Night). In her second book,  Le secret de l’espérance (The Secret of Hope), we see how her will to resist injustice, beginning on 17 June 1940 with a refusal to bow down to the Nazis, continued beyond the war in her work alongside Joseph Wresinski and ATD Fourth World. In the first pages, she describes the burial service that took place in the chapel of the emergency housing camp in Noisy-le-Grand, France. It was the winter of 1960 and two children had died in one of the fires that were so frequent there:

“…why does the Good Lord allow this. Father Joseph is at the altar, everyone is silent, many are weeping in silence. He himself does not easily manage to overcome his pain and emotion. […] What can I do in the face of the extreme poverty of the world, the wars, the famines, all that I would have liked to never know again after I left the world of concentration camps? But I understand that I have never completely left it… a smell emanates from our bodies huddled together in our overcrowded barracks. […] The humiliation of disgusting oneself. Families here have only three water points for this big slum, no toilets, no electricity. I cannot accept this, any more than the death of these two little girls that brings us together.”

For the rest of her life, Geneviève de Gaulle worked to fight injustice.

To oppose socio-economic inequality, she stood alongside people in poverty who also refused to accept the injustice they experienced. She always wanted to maintain close ties with these people whose belief in a better future inspired others to join their cause. Day after day, she learned from Fourth World Activists, Volunteer Corps members and Allies how individuals in poverty defied their circumstances by maintaining community solidarity.

In France, Geneviève de Gaulle showed civil servants, ministers, presidents of the Republic, and the whole National Assembly how to walk the path of justice alongside those who suffer injustice every day. Her tireless advocacy led to many new policies, including the 1998 orientation law to combat exclusion. Today, many more people across the globe have joined the movement that she helped build, a movement grounded in the belief that we all have something to learn from people who suffer from extreme poverty.