Skip to content
Home > Indian Ocean > Mauritius > A decent home: the key to a better future

A decent home: the key to a better future 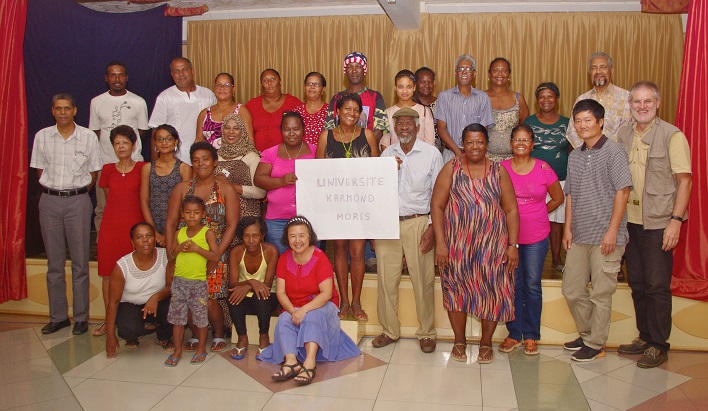 This was the theme of the first People’s University to take place in Mauritius (Liniversite Karmond Moris) on 13 March 2016. Preparatory meetings took place in four communities in different parts of the island. The plenary session involved thirty people. The hope is to expand to include increased numbers of people living in extreme poverty, as well as non-governmental organisations. The participants say they would not have missed this event for the world!

Developing a Fourth World People’s University — a setting where adults experiencing extreme poverty can share their thoughts and speak with people from varied backgrounds — will remain at the heart of the ATD Fourth World–Mauritius programme for the coming years.

Approximately fifteen adults from four neighbourhoods (Cité Anoska, Case Noyale, Sainte Croix and Richelieu) were keen to begin with the theme of housing “because without a decent place to live, we cannot teach our children and they are unable to learn in school”. In each neighbourhood, people living in difficult conditions met three times to discuss the theme and to prepare their contribution using posters, sketches and/or texts.

The first plenary session of the Liniversite Karmond Moris took place on 13 March in a conference hall called Heritage Court. The use of this air-conditioned meeting room was generously provided by a Chinese company, Nam Shun Fooy Koon, in their cultural and social club. The participants showed their enthusiasm for the gathering by all arriving an hour early.

Mr. Philippe Fok Kan, president of the company, gave a very warm welcome, “I would like to stress that the doors of Nam Shun Fooy Koon are always open to your organization if you are ever in need of our help.” ATD Fourth World’s international president, Mr. Cassam Uteem, hailed the birth of a Mauritian branch of the People’s University, “To begin, I would like to congratulate you for your initiative in creating Liniversite Karmond Moris. I also congratulate you on choosing a day as symbolic as today, which is to say, Independence Day. At the same time as the country celebrates its 48th year of independence, Liniversite Karmond Moris sees the light of day. So it is a symbolic day and I hope it will bring good things. I hope that, just as there have been many success stories for different sectors of the country, Liniversite Karmond Moris will find success throughout its existence, that it will have a long life and that people will continue to come to learn and to share their knowledge. […] Having chosen housing as the theme for the inauguration of this People’s University shows that you know what is a priority for you; what is a priority for the poorest. People.”

Summary of the preparations

The main answers to the first two questions were presented on posters, “Why is housing important for you?” and “In your experience, what is needed for housing to be livable?”

For the third question, “What have you done to find housing? What difficulties have you encountered? What successes have you experienced?” answers took the form of skits or written presentations.

During the plenary session all of the participants spoke, both with one another and with the guest speaker, Mr. Cursley Goindoorajoo, of Caritas–Mauritius. Some excerpts from the discussion:

“Housing is important for us as parents to be able to communicate well with our children.”

“Without housing, a family will be divided. A house unites a family.”

“Housing is important for us to feel good and safe, and for our family to feel calm when a cyclone strikes. With a house, there’s no need to worry and rush to a shelter.”

“Housing matters so much for a family, especially in making a bright future for our children.”

“When you have no home, you’re worth less than a dog.”

“Without housing, you don’t feel like a human being living in society, you can even disgust yourself, or become disgusted by life.”

“We were all together, and this gave me confidence.”

Many participants said how proud and happy they felt to be there. Each person was able to find a meaningful role to make the discussion stimulating. People of different neighbourhoods made connections and could better understand how to collaborate in overcoming poverty:

Some people remarked that the gathering allowed for people who are generally isolated in their neighbourhoods to join others:

The guest speaker, Mr. Cursley Goindoorajoo, concluded the discussion: “I was happy to see everyone here meeting each other. In their preparation, they were all on the same wavelength. There was complicity among them; a motivation on their part to want to overcome. I am sure that they will succeed.”

The next Liniversite Karmond Moris plenary session will take place on 5 June 2016.