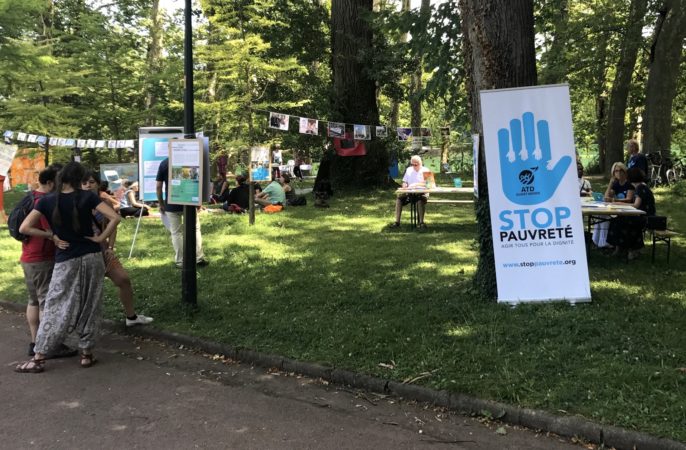 For 15 years, the Dialogues in Humanity have been organised in Lyon by ATD Fourth World. Today they are held in other parts of the world, including Belgium, Brazil, Canada, Ethiopia, India, Mali, Morocco, and Senegal. During 3 days under the trees of the Tête d’Or Park in Lyon, we discussed the future of the world based on the experiences of the participants coming from all continents. This year, the event was held the 7th, 8th and 9th July and the ATD Fourth World team in Lyon facilitated this year’s event through:

This year the theme was: “Teach me how to dance under the storm! And we shall live happy days”. It was addressed from three different perspectives:

Braids… and a land for everybody

At the entrance to the Dialogues in Humanity, there was a large multi-colored ball next at which a number of the participants were making fabric braids. The ball was in the image of a new earth, a symbolic one – “the land for everybody” – that everyone was invited to build by making braids. It was initiated by one of the ATD Fourth World’s street libraries in Beauvais in the north of France. This very special land, stretching out to several hundred kilometres, invited the participants to join together on the banks of the Rhone. A braid is made of 3 strands and put together to form the ball; collectively, they showed the strength and the wealth of the human race. By making braids together and discussing the struggles against extreme poverty and the human rights of all, the participants – adults and children alike – created new links and new strengths together.

Fabrice, an ATD Fourth World activist, was the specialist in the public gathering of this new earth. He remembers in its early stages when the ball could be held on his thumb. Today, it weighs 100 kgs, and it’s still growing thanks to those who braid from different corners of France but also from around the world, such as in Lomé, the capital city of Togo. It will be displayed in the Place de la République, Paris, for the celebration of 60th anniversary  of ATD Fourth World on 14th and 15th October next.

Many people stopped and took time to make a braid, while discovering ATD Fourth World and its work. One of the artists who had performed on the big stage the night before, the guitarist-singer Jean Sangally from Cameroon, spontaneously playing his guitar during the braiding on Saturday afternoon.

Playful and artistic, the ball was placed by the organisers at the entrance to the Dialogues in Humanity event.

Sharing a testimony of extreme poverty

It was at the rose garden of the park, one of the most beautiful in Europe, that Fourth World activists, accompanied by people participating in a writing workshop in a day care center for homeless people, were able to express what inspired them in their precarious lives. The roses with their thorns were a symbol of the beauty and the pain experienced in their lives. The contributions of each participant were different but strong. Patrick’s words come to mind. Living with a physical disability, and not having learnt to read and write, he came to the microphone to speak about his struggles as a citizen. Not entitled to vote, he fought against this injustice by writing  to several government ministers. Finally, he had a hearing before a judge who gave him a civic exam (what we as citizens never had to pass!). Thankfully, he was successful and now he can vote!

This moving personal testimony ended with a reading of the text of the 17 October Stone at the Trocadero in Paris in several languages: German, Arabic, English, Creole, Spanish, French, Italian and Portuguese.

Public Assembly: “Human Rights are first and foremost about the right to be a man!”

This session was focused on how extreme poverty can make us rethink and to live differently; how to revitalize our responsibility as citizens in the struggle to eradicate poverty.

It was facilitated by Louis Join-Lambert of ATD Fourth World and Patrick Viveret, co-founders of Dialogues in Humanity. Both had spoken at the Cerisy International Symposium organized in June by ATD Fourth World. They learned many new ideas from this encounter, which you can discover for yourself through viewing the videos on the conference website. They launched the public discussion – the agora – and how rich an experience it was! Among the many participants were René, Gezabel, Monique, Françoise, Doris and Gindo. They spoke about the difficulties they experienced in their lives and about their commitment to fundamental rights.

Doris said, “Personally, I feel that nobody can steal my dignity. And yet, sometimes, I, like others, we can let ourselves be robbed of our dignity. But this is something that belongs to me, and it is not given to me by others”.

Also Gezabel said, “ATD gave me tools. I have trouble in reading but my daughter, who is 21, wants to be a schoolmistress, and I am very proud of her. ATD gave me tools and now I use them in my commitment and in my action “.

In addition, the importance of continuing this reflection through the world day for overcoming poverty on October 17 was highlighted several times.

To conclude our event, we all meet again at the rose garden to sing. It is the choir of ‘Chants sans Pap’ye’ which begins the performance. As you can tell from its name, many of these singers are “illegal” people from different countries.

Then, it is the turn of the choir of ATD Lyon. For 17 years, it has brought together members of the movement and other people. Every October 17th, the choir responsible for the animation of the World Day for Overcoming Poverty held in Lyon.

But we are not in the dialogues for nothing … it is the occasion of a beautiful meeting between the two choirs. Between their individual performances, the two choirs sing a song together, with the choirmaster of the first choir accompanying the singing on guitar.