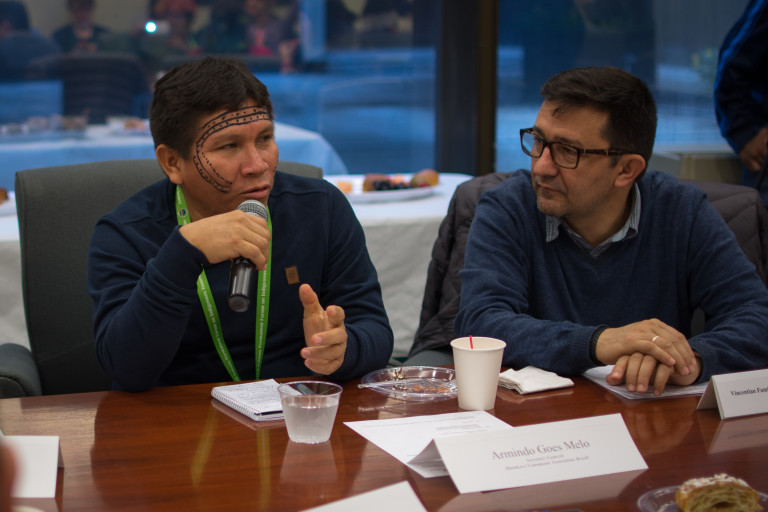 At the United Nations, ATD Fourth World regularly collaborates with other NGO’s to organize informal meetings on topics related to poverty, sustainable development and the UN 2030 Agenda. The “Leave No One Behind” Dialogue Series always includes speakers who have a lived experience of the issue addressed.

Like other people who live in poverty, indigenous people often experience marginalization and prejudice, yet have valuable things to say about issues important to the world. In May 2017 ATD convened a dialogue to listen to the expertise and knowledge of indigenous peoples regarding the sustainable development agenda.

Indigenous people disproportionally experience poverty. According to the World Bank, “There are about 370 million Indigenous people in the world today… Present in over 90 countries, indigenous communities represent about 5% of the world’s population but make up 15% of the world’s extreme poor, and 1/3 of the rural poor. […] Wherever they live, Indigenous Peoples face distinct pressures, including being among the poorest and most marginalized in their societies. […]

Two indigenous leaders, Mr. Rune Fjellheim, Director General of the Sámi Parliament of Norway, and Mr. Armindo Goes Melo, Secretary General of the Hutukara Yanomami Association of Brazil, opened the meeting. The dialogue made very clear that it is crucial to include indigenous peoples in decisions that affect their communities. “Without dialogue”, said Mr. Fjelheim, “there is a risk of leaving people behind”.

Participants agreed that mining, extractive industries, electric plants and waterways are among the most pressing problems they are facing. The Sámi Parliament was created in 1989 after a long struggle for political recognition that culminated in opposition to construction of a power plant.

Speakers were also deeply concerned about the impact of climate change in their very fragile ecosystems: the Artic and the Amazonia. Indigenous peoples have contributed very little to the depletion of resources. Yet, they are most affected by environmental degradation. They are also very aware of the inability and lack of preparation of most governments to deal with health and other issues that result from harm to the environment. Mr. Melo pointed out that the Brazilian constitution recognizes indigenous peoples. However, he said, they must also be recognized “in living words and in action”.

Indigenous groups from the Amazonia are working towards creative solutions. Unfortunately, they are very often seen as criminals and have to fight against discrimination. Indigenous peoples have a profound knowledge of nature, and they understand the connection between lands, languages, cultures and many forms of well-being. Clearly they have a lot to contribute to the 2030 Agenda. The dialogue concluded with Mr. Melo Yanomami leading a chant that his people use when faced with a challenge.

The dialogue was part of the “Leave No One Behind” series organized by ATD Fourth World, and occurred in the context of the UN Indigenous Forum.

Download the notes and the program for this event.

For more information on ATD Fourth World’s activities at the United Nations, see: