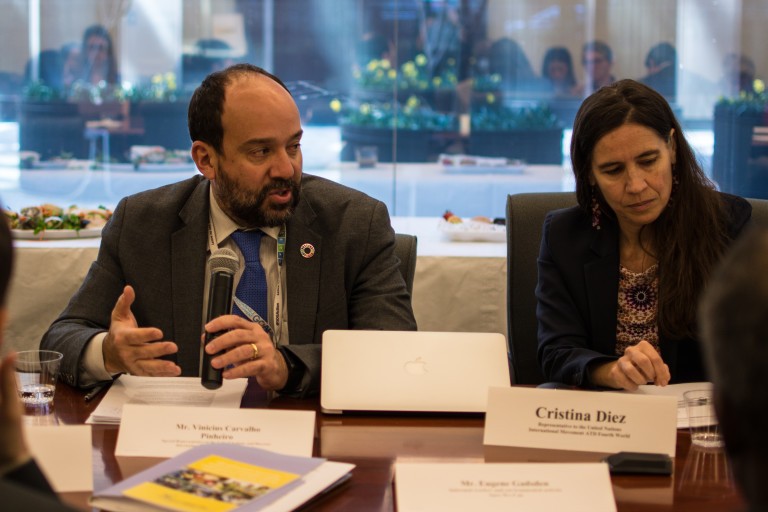 At the United Nations, ATD Fourth World collaborates with other NGO’s to organize informal meetings on topics related to poverty, sustainable development and the UN 2030 Agenda. The “Leave No One Behind” Dialogue Series always includes speakers who have a lived experience of the issue addressed. In March 2017, the conversation was about informal workers.

As in many ATD-organized meetings, two people from very different backgrounds found themselves sitting at the same table. Framing the March 2017 dialogue were Eugene Gadsden and Vinicius Pinheiro, Director of the New York ILO Office. Mr. Gadsden is an informal worker and environmental activist from Brooklyn, New York, and founder of Sure We Can. The conversation addressed the challenges informal workers face when they try to make a living.

Mr. Pinheiro emphasized the importance of the informal economy in most countries. “The informal economy comprises half to three-quarters of all non-agricultural employment in developing countries”, he explained. However, informal jobs are part of the economy in every country. “Although it is hard to generalize concerning the quality of informal employment”, he continued, “it most often means poor employment conditions and is associated with increasing poverty.”

Mr. Gadsden entered the informal economy when he found himself unemployed and was unable to find another job. He talked about “canning” (collecting cans and bottles to redeem their five cents value) as an honest and fair job. “I can work at my own pace, with no boss. I can take 50 breaks a day or no breaks”, he said.

After years working as a canner, Mr. Gadsden founded a redemption center in Brooklyn. Sure We Can is “a non-profit recycling center, community space and sustainability hub” where canners bring the bottles and cans they collect to make a living. The organization supports local neighborhood gardening efforts and local artists. They also run education programs on sustainability and social inclusion.

Mr. Gadsden highlighted some of the difficulties he and his colleagues faced every day in the “informal sector”. He often worked more than 16 hours a day. Even when sick, he was forced to move from place to place. When discussing ways to improve the conditions of informal workers, all participants agreed that social protection programs such as access to health and disability insurance, income security, and unemployment benefits is crucial.

The dialogue also explored how policies and actions to strengthen the formal economy can contribute to achieve the Sustainable Development Goals. Case studies from Argentina, Brazil, Indonesia, Liberia and Turkey were presented.

ATD Fourth World works with families in Madagascar, Guatemala, and other countries whose only means of survival is collecting trash from local dumps. While such work may provide a small income and even contributes to recycling efforts, it is dangerous and does not sustain life in decent conditions. Social protection programs, like the minimum income program experiment that ATD and UNICEF organized in Madagascar, are essential to enabling families to move beyond day-to-day survival.

ATD’s “Working and Learning Together” programs like those in Guatemala and Madagascar offer the opportunity for a more dignified life. More important, they focus on involving the most excluded families so that they become part of a supportive community. For families who have been shunned as “rag pickers,” offering respect and dignity, as well as active and ongoing outreach, is key to participation and success.

Read the Dialogue report and program.

Additional information on the Madagascar Working and Learning Together Program.