Skip to content
Home > At the United Nations > Digital Inequality: It Goes Beyond School

Digital Inequality: It Goes Beyond School 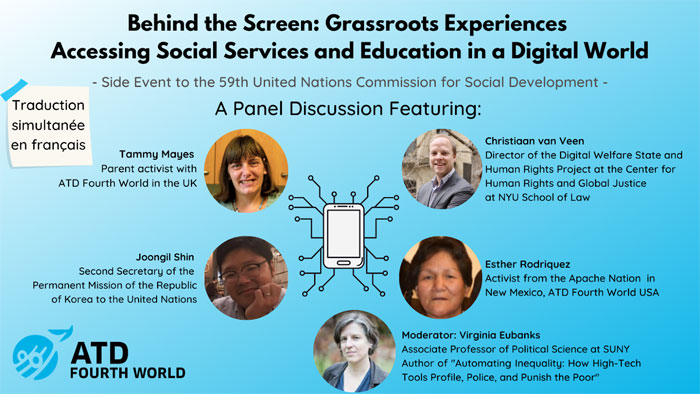 For most people around the world, Covid-19 has meant an abrupt transition to digital learning, working, and interacting. However, even before Covid-19, many aspects of social protection systems were becoming more and more digitized. When this ramped up during the pandemic, so did the injustice and digital inequality.

Earlier this year, the UN Commission for Social Development looked at the theme of a “Socially just transition towards sustainable development: the role of digital technologies on social development and well-being of all.”

The theme was relevant and timely. Moving to digital systems has had profound impacts on individuals and families living in poverty. For the Commission, the International Movement ATD Fourth World hosted a virtual side-event to look at these impacts. Behind the Screen: Grassroots Experiences Accessing Social Services and Education in a Digital World brought in people who have experienced such changes first hand to give their perspective.

The panel, moderated by Virginia Eubanks, author and Associate Professor of Political Science at the University at Albany, SUNY, included:

Behind the Screen: Grassroots Experiences Accessing Social Services and Education in a Digital World organized by @ATD4thWorld at #CSocD59 with Virginia Eubanks @PopTechWorks moderating pic.twitter.com/Yr4D9UEscD

Virginia Eubanks, author of Automating Inequality, discussed her research on how automated systems can invade the lives of people in disadvantaged communities. Often these systems can become controlling and punitive, she said.

Esther Rodriquez, who lives in rural New Mexico, talked about the challenges of supporting her three grandchildren with their online learning.

Ms. Rodriquez described obstacles her grandchildren face, including a lack of personal attention in the online classroom. Sometimes technical difficulties interrupt learning. And many families she knows cannot afford regular Internet access or the digital devices children need for school. Despite these challenges, Ms. Rodriquez felt that strong family ties were helping her grandchildren and other students in the community.

"When excluded from access to digital services, asking and sharing information with my peers is what I do", says Esther Rodriguez, again sharing wisdom about resistance to #LeaveNoOneBehind at @ATD4thWorld at #CSocD59#EveryoneIncluded pic.twitter.com/m7bwNl6tJN

Remote family court in the UK

In the UK, families in poverty are experiencing a different kind of trouble with online systems. There, the entire family court system is run through virtual meetings due to Covid-19. Tammy Mayes described the inhumane treatment families endure during court hearings that decide whether children are removed from parents forever.

Through her work with UK Parent Families and Allies Network (PFAN), Ms. Mayes is currently involved in research on this issue. Too many families, she explained, felt their court hearings were unjust due to the online format. Client-attorney communication was severely limited. Witnesses had difficulty accessing the proceedings or giving testimony. Sometimes professionals were distracted and did not pay attention to critical details. In addition, Ms. Mayes stated, the lack of personal interaction during such intimate and life altering proceedings was simply cruel.

About justice in Covid times, Tammy Mayes says "I don’t think any case, unless it’s a matter of life and death, should be heard online. It’s not a fair system. Parents can’t see expressions on peoples' faces and the judge can't see the face of the parents or the body language" pic.twitter.com/VnZNWXV6Lz

"Privacy is a big concern during remote hearings. Who is actually on the call? Who else can hear what is being said? Parents in cramped living conditions can't protect their own children from hearing proceedings. Confidential cases cannot be confidential while in someone’s home."

Other first person experiences with digital technology, both positive and negative, came from ATD Activists Patrick Lubin (USA) and Pascal Poulain, Chantal Vallée, and Doris Mary (France). Listen to what they said here:

There has been a surge of interest in people’s “digital rights,” said Christiaan van Veen, Director of the Digital Welfare State and Human Rights Project at New York University. Yet this interest focuses largely on how technology impacts the middle class, he explained. Often completely overlooked is the way that digitizing the welfare state affects individuals in poverty.

"[We need to] get serious about investigating how poor people can benefit from the digital world and potential risks that involve their lives." ~ @cpjvanveen

. @cpjvanveen: "For progress, we need *political will* to design systems with regard to their impact on people in poverty. There are hidden assumptions we need to challenge"

Technology isn’t all bad, some speakers pointed out. A video about grassroots experiences with digital voting in the Democratic Republic of Congo showed the positive social impact of digital technology on the democratic process.

In addition, some countries have invested resources in bridging the digital divide. In South Korea, explained Mr. Joongil Shin, the government has improved accessibility and digital literacy through decades of citizen-focused campaigns.

Having a say in how digital systems are deployed

The phrase ”Nothing About Us Without Us’’ expresses how the panelists felt about the design of digital systems. Deprived of basic access to electricity, electronic devices, and the Internet, many are effectively shut out of essential services. And, unfortunately, people in deep poverty don’t have much say in the digital transformation of public services.

For example, in some countries many children can’t go to school or get health care because they do not have birth certificates. In such situations, “digital inclusion” has a tremendous potential to help everyone obtain the “legal existence” they need to access services. However, obstacles to progress here are not only technological but also political. While some improvements could be implemented tomorrow, governments must choose to invest in new systems.

No matter where people live, it’s possible to build more humane social service systems. Ms. Rodriguez underscored the importance of people sharing information with each other and between organizations.

Speaking on behalf of many families in the UK who have been irreparably harmed by social services, Ms. Mayes emphasized that parent advocacy is critical in the face of systems that are becoming more indifferent and inhuman:

The full video recording of the event is available here:

This article includes more on the ATD/PFAN research and Taliah Drayak’s statement at the high-level “Multi-Stakeholder Forum.” The full event can be watched on United Nations WebTV.

This article is adapted from one by ATD-US found here.